One of the world’s best-loved ships and a national treasure, HMS Victory has reached a hugely significant conservation milestone in the 10-year-long project to ensure she is protected for the next half century. The ship has been partially enclosed by temporary scaffolding.

A century after Vice-Admiral Lord Nelson’s flagship at the Battle of Trafalgar was moved into drydock in Portsmouth, UK in 1922, scaffolding specialist, PHD Access was awarded a £4M contract to enable the next phase of conservation work. It’s akin to a modern-day great repair that echoes the tradition of large-scale work carried out on a first-rate line-of-battle ship in the 18th and 19th  centuries.

The scaffolding installation was completed in time for the busy 2022 summer holiday period, with the ship remaining open to visitors but with access restricted for limited periods. 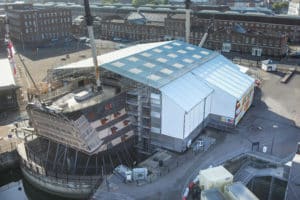 A specialist 160-tonne crane dwarfed the 62m-high ship to erect a multi-level temporary covered access and work platform around the 257-year-old vessel, which sits in a drydock, itself an ancient monument.

A temporary building was constructed in stages over Victory by PHD Access, enabling the start of the process to dry the ship and keep her weathertight during conservation work. Platforms will eventually surround the ship in phases, encasing it in a secure structure. Phase one runs from the mizzen mast to the foremast, with phase two covering the bow, and the stern in phase three. This temporary building will also provide full public access at three levels for viewing of the work, allowing the development of a fascinating new visitor experience where visitors can ascend the scaffolding for an exceptionally rare opportunity to see specialist shipwrights at work.