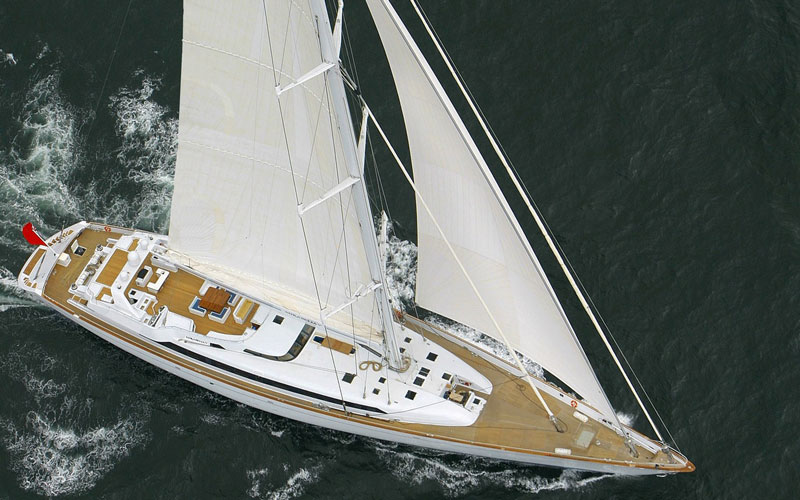 The single-mast sloop sail design was chosen in order to maximise the accommodation space, as M5 was built for luxury yacht charters, offering equivalent facilities to those of a similarly-sized motoryacht. The righting moment of the sailboat hull is said to make it more sea-kindly than a motor vessel, which enhances passenger comfort. The high-aspect sail configuration gives a good speed potential, and M5 regularly achieves over 19 knots in 3.5m (11.5 ft) wave heights.

Such a tall mast has to be balanced by a deep keel, and maximum draught is 10.2m (33.5 ft). To allow M5 to enter harbours such as her original home port of Palm Beach, Florida, naval architect John Stott of Ron Holland Design specified a lifting keel, weighing 150 tonnes. This was chosen rather than the swing keels normally specified in similar large sailing yacht applications. The keel is raised by powerful hydraulic cylinders, and when fully retracted the draught is reduced to 4m (13.1 ft).

Support pads for the keel had to be capable of carrying high loads and offer good wear resistance, as well as being as quiet as possible in operation. During Stott’s research into composite bearing materials he discovered Thordon. And working in conjunction with Thordon’s Chief Designer, he specified the company’s SXL pads for the lateral guides, and for the front and back guides, which also function as location ram bearings for the keel locking arrangement, Thordon SXL TRAXL bearings with Thorseals were chosen.

The Thordon inventory is completed by water-lubricated COMPAC propeller shaft bearings for the motor propulsion plant, which were specified by propeller supplier Rolls-Royce Kamewa.

During the DNV 10-year survey which was undertaken at the same time, the Thordon bearings were all found to be in excellent condition, and they remain fully serviceable five years on, with a total of 15 years’ service.

George Morrison, Thordon’s Regional Manager, said: “The SXL lateral guides have proven capable of withstanding the high forces and have shown excellent wear resistance, while the SXL TRAXL bearings have proved highly capable of withstanding high operating pressures and able to absorb impact loads. The Thorseal self-lubricating polymer material has been shown to reduce cylinder wear, while noise is minimised when the keel lifting mechanism is in operation. This is because there is no metal-on-metal contact.”

When the vessel was launched in 2003, Thordon’s scope of supply helped towards M5 breaking new technological barriers. It continues to do so, ensuring the sloop is sea-worthy and available for charter.