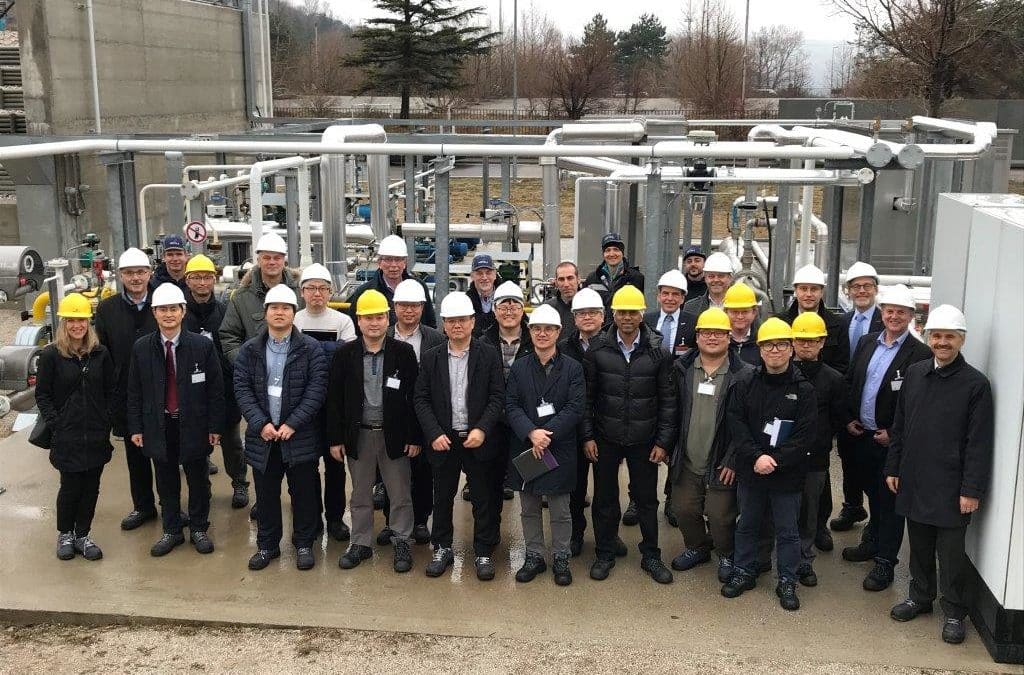 Guests from AET, Statoil, OSM Maritime Group, Samsung Shipyard and Hyundai Heavy Industries-Engine & Machinery Division were on hand in Trieste, Italy, in March, to witness the successful test of a WinGD X-DF engine running on a NG-VOC mix. The test demonstrated the engine’s capabilities under various load scenarios with up to 20% VOC in the fuel ratio. The engine sustained high performance throughout transfers from pure NG to a VOC mix, as well as transferring to diesel mode and back again. Notably, while maintaining efficiency, NOx emissions remained significantly below IMO Tier III levels while operating on the NG- VOC mix.

The capability demonstrated by WinGD in Trieste, and already specified by AET for its shuttle tankers, has considerable implications for both the oil and gas industry and the environment. VOCs are a waste product from crude oil handling and transport which represent both a hazard and a loss of revenue to oil and gas producers and shippers. Historically, they were either discharged into the atmosphere or burned off. Now, with the development of the X-DF engine’s new fueling mode, VOC can be turned into a viable source of energy.

“An early finding on the first X-DF engines with low-pressure gas admission to enter service was that their inherently stable combustion gave scope to run the engines on gas with lower methane numbers. Working with our partners from Wärtsilä Gas Systems from Norway and the local team at the Wärtsilä test facility in Trieste, we have applied this knowledge to the new fuel combination,” said Marcel Ott, Senior Project Manager DF Technology, Research & Development at WinGD.

Importantly, to burn the NG-VOC mix the X-DF engine concept remains unchanged. “There are no significant changes in performance and emissions behaviour – the engines are fully IMO Tier III compliant burning the natural gas-VOC mix. In fact, aside from a few precautions according to ambient and boundary conditions, no hardware modifications and no application-specific control functions are required on the engine, and standard tuning can be retained. Likewise, the gas handling safety philosophy is identical with X-DF dual-fuel engines burning natural gas solely.” explains Ott.

It was also established during the project that, in contrast to a high-pressure system, the low-pressure gas admission feature the X-DF engines is beneficial for mixing VOC into the natural gas fuel, since condensation of the heavy hydrocarbons in the VOC can be avoided.

WinGD’s newly acquired capability to run X-DF engines on the NG-VOC places WinGD firmly at the leading-edge of green propulsion solutions, noted WinGD’s Vice President R&D, Dominik Schneiter. “We understand the pressures faced by today’s shipping industry and simple solutions are key. Our X-DF engines now offer ship owners a further way to improve their environmental footprint while at the same time, reducing fuel cost – and without increasing the basic simplicity of our X-DF engines with low pressure gas admission. The NG-VOC capability will add a further dimension to the benefits that make our X-DF engines such a strong contender for ship owners facing tighter emissions controls and increased operating costs.”