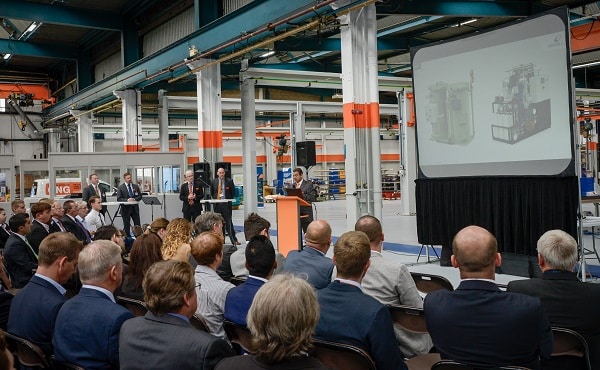 The refurbishment project started in 2015 and also aims to capitalise on demand from the cruise sector for dry waste systems.

Head of Ballast Water Management Systems Dr. Joe Thomas says that an estimated 27,000 BWT refurbishments to come industry-wide in the next 5 years, amounting to 15 retrofits and 3 new-build installations per day, the new facility will be a major factor in meeting orders. Production lines are also being set up under license in China, with quality control being a major focus.

Thomas says the MEPC’s decision on decoupling of BWT installation from IOPP certifications means the curve of demand over these 5 years is very hard to predict, as data on which vessels have decoupled their registrations is not centrally aggregated. Planning of production has therefore had to include best-guess predictions, but Thomas is fairly confident they have a workable idea of volumes needed. Wartsila can expect to be among the top five beneficiaries of the coming demand.

Unlike most other manufacturers, Wartsila elected to develop both electro-chlorination and UV treatment systems in parallel and are now offering both types, covering a wide base of needs. Additional production facilities for the Electro-chlorination systems are now being set up in China, while training is being set up for 15,000 service engineers and also ship crews.

Responding to concerns raised by a recent ABS survey of vessel owners, where reliability of BWT systems in general was called into question, Thomas says the bedding-in problems are to a large degree unavoidable. “There has been opportunity to get customer feedback as either ships have not had systems installed, or – as the ABS survey pointed out – they had not been used. If a piece of equipment has been sitting idle for a year or more with no maintenance, it’s not likely to perform perfectly the first time it’s switched on. There is an obvious need for crew training, and there also needs to be feedback so that design modifications can be incorporated if needed.”

“Problems reported on intake and discharge rates are also affected by the efficiency of the pumps and pipework. There can be decreased efficiency of both that may only come to light now – and very often there have been numerous changes made to the ship since new. All manufacturers are facing similar problems and it is a question of getting feedback to iron out initial problems”.

Thomas referred to industry predictions that, despite around 90 manufacturers having entered the market, the vast bulk of installations are expected to favour the top 5 companies: “Some companies are not necessarily going to be around for the long term. For us, our customers know they are getting a lifetime commitment”.