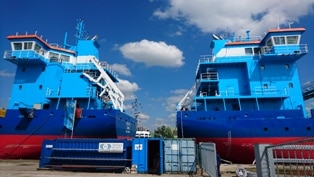 The Royal Bodewes built Mirva VG will join the first of class Eeva VG, which will be delivered in September following outfitting in Papenburg, Germany. The vessels will be owned by Gaiamare Oy, a Meriaura Group company.

Both 4700dwt Eco Coasters have now been coated with the game-changing Ecospeed hard coating above and below the water line in VG Shipping’s red and blue livery.

Ismo Saaros, Director, Project Management, VG-Shipping, explained: “We wanted to produce the cleanest, most environmentally-efficient coasters of their class so we specified several ‘green’ solutions, including a ballast water management system, a Selective Catalytic Reduction system for reducing NOx emissions and the Ecospeed hull coating.

“We didn’t want to use a traditional antifouling system because of the chemicals that they contain and found the Ecospeed solution was the most effective coating system for reducing resistance [drag]. With a hard coating we are also permitted to clean the hull underwater in the ports where we operate without damaging the surrounding environment.”

The environmental and hard wearing performance of the coating were also aspects flagged up by Robert Jan Steenbergen, Project Manager at Royal Bodewes,

He said: “Since Ecospeed is not a biocide-containing antifouling it is more environmentally-friendly and because these vessels will operate in the Baltic we needed a coating suitable for sailing in ice. It lasts longer.”

Commenting on the application of the coating, Steenbergen, added: “It was the first time the yard had applied Ecospeed on this scale, to a complete hull, but application was very straight forward.

“Applied under Subsea Industries’ supervision, the result is very good: the preparation, the blasting and how it looks gives us confidence that this coating will perform exceptionally well.”

Built to the ‘Cleanship’ class notation, the VG EcoCoasters, designed by Finland’s Foreship and Aker Arctic, are part of a fleet expansion programme to strengthen Meriaura Group’s position in the market for vessels of this class.

Each vessel features a hull form, systems and technologies designed to reduce substantially the impact of operations on the marine environment.

The vessels propulsion arrangement, which incorporates a power take-in booster system to reach ice class engine power, has been optimised for slow steaming operations at speeds between 8 and 9kts, although main engines can attain a top speed of 10.5kts in open water conditions. The fuel-efficient ice-class 1A vessels are powered by an ABC 8DZC dual-fuel engine, capable of running on marine gas oil (MGO) and biofuel produced at Meriaura Group’s refinery in Uusikaupunki.

Manuel Hof, Production Executive and NACE Coatings Inspector at Subsea Industries, said: “We are delighted to have added to VG-Shipping’s exceptionally “green” cargo vessels with our Ecospeed coatings. VG-Shipping specified Ecospeed at the design stage because of the coating system’s proven performance.

“Mirva and Eeva will not have to be coated again during the vessels operational life time, saving the company thousands in paint costs and drydocking fees, whilst preventing damage to the marine environment through the emissions of toxic chemicals found in conventional soft coatings.”

Subsea Industries Executive Director Boud Van Rompay added: “With these vessels operating in arctic waters, the owner required a coating capable of withstanding ice impact and highly abrasive waters. Polar trading is one of the biggest challenges for coatings manufacturers, since abrasive waters scratch and scrape conventional anti-fouling paints resulting in hull recoats after just one season. Ecospeed hard coatings are developed to last even in the harshest of environments.”

“When Patriot drydocked in 2015, bar some mechanical damage which was easily touched up, the coating was immaculate and didn’t need to be cleaned so frequently because of the northern routes it operated.”