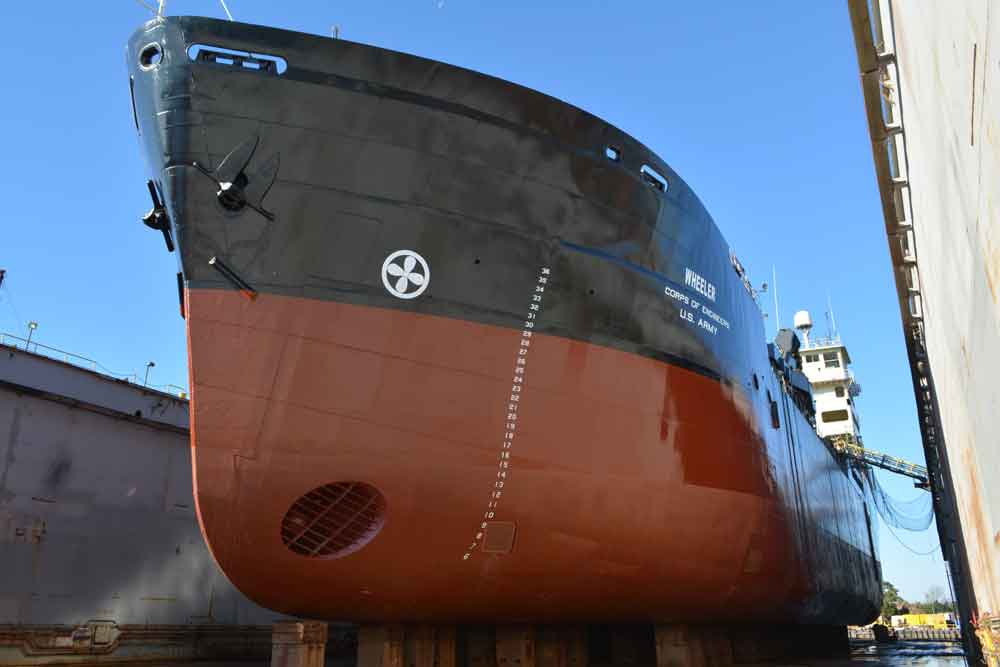 World Marine of Alabama (WMA) has completed work on a contract valued at over $14 million to drydock and repair the Dredge Wheeler, a hopper dredge owned and operated by the U.S. Army Corps of Engineers.The contract was awarded in September; arrival was delayed due to emergency dredging assignments following Hurricane Harvey.

World Marine’s work package on the 35-year-old ship was comprehensive, including significant hopper and hopper door steel renewals, installing two new hydraulically-actuated weirs, and installing a new emergency generator. Machinist crews assisted with rebuilding the vessel’s bow thruster, replacing one of the vessel’s tail shafts and overhauling the vessel’s CPP system. Pipe crews worked to renew piping throughout the vessel. Electrical crews had many assignments, including the installation of VFDs on the vessel’s large seawater cooling pumps. Other items of interest include painting of the entire dredge pump room and replacement of all passageway flooring throughout the accommodations. WMA replaced a main 43” dredge pipe gate valve, installed new drag arm service frames, and renewed both jet pumps. A substantial coating package was completed throughout much of the vessel’s interior, and a new underwater coating system was applied as well.

“World Marine continues to complete dredge repairs safely and competitively for many of the U.S. dredge operators, including the Army Corps of Engineers. Fixed price dredge repairs take an understanding of these unique vessels and a talent level we are proud to have,” commented Robert Beckmann, CEO and Executive Director of WMA. “Dutra’s Dredge Columbia will be here in a few weeks for another substantial drydocking project at our shipyard,” he said.

Since mid 2017, World Marine has completed drydocking and repair packages on other large hopper dredges including Dutra’s Dredge Stuyvesant and Manson’s Glenn Edwards.