Two ship sections loaded out in a week 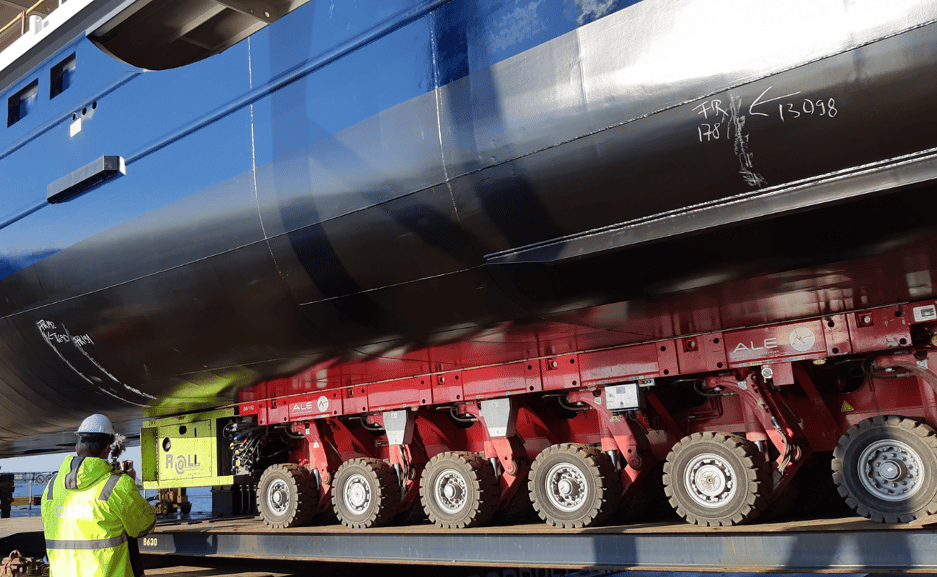 Den Breejen Shipyard just outside Rotterdam, the Netherlands, specialises in building luxury river cruise vessels and ferries. It maintains two machining halls, which are used during construction of larger vessels to manufacture ship sections, which are then welded together elsewhere.

ALE has been entrusted with a large number of heavy lifting projects with the shipyard due to its experience in managing similar projects, with strict time and space constraints. On this occasion, two sections of a river cruiser were transported from their point of manufacture onto a submersible barge.

This project consisted of two separate phases. Before any work took place, both sections of the ship were weighed using analogue hydraulic gauges, to ensure the load-out plan was correct in each case.

During the first phase, the heavier 780t section of the vessel was jacked-up and weighed using ALE hydraulic climbing jacks. Using 11 jacking points, the section was lifted to 1,700mm clearance in order to allow SPMTs to be positioned underneath.

18 axle lines of SPMT were then used in two separate configurations to transport the ship section: one eight-axle four file and one 10 axle four file. The larger section was moved across the quay and onto a submersible barge.

After this section was set down onto supports positioned on the barge, the SPMT was lowered and removed back to the quay. The barge was towed to a safe place and then submerged, so that float-off of the ship section could occur.

During the second phase a lighter 350t section was jacked-up using seven climbing jacks, allowing access room for SPMTs underneath. This second section was then loaded-out onto the submersible barge, using 10 axle lines of SPMT in a four-file configuration.

ALE performed both load-out operations within the space of a week, avoiding disruption to the project’s overall schedule. This work helps the shipyard to produce larger vessels using its existing facilities, in a modular fashion.

Following float-off, both sections of the vessel were then transported by water to a nearby slipway to be mated together, ultimately forming a 120m long river cruiser.