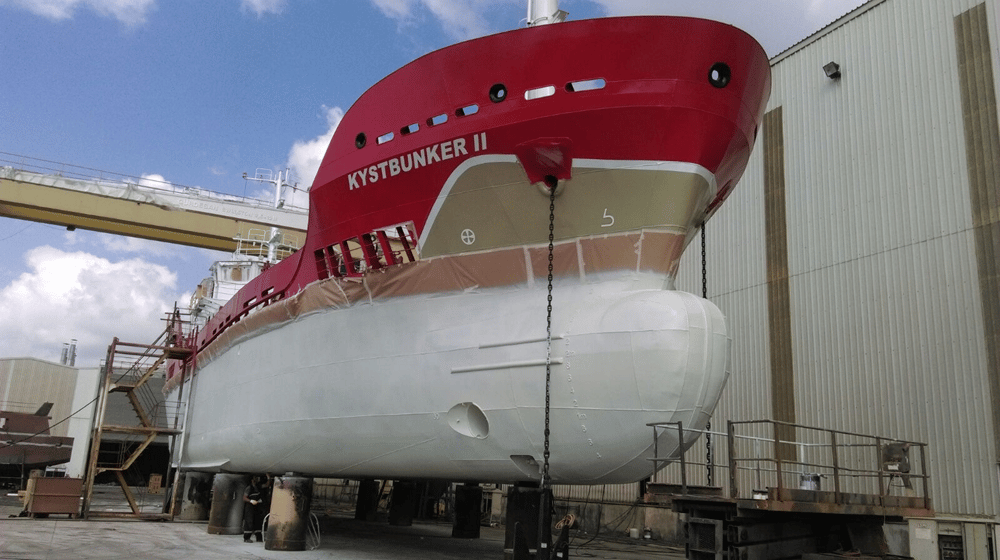 Its Ecospeed hull coating and Ecoshield rudder protection coating have both been applied to a shallow-draught AHTS (anchor handling tug and supply) vessel and an oil tanker at the Atlas Shipyard in Gölcük and the Akdeniz Shipyard in Ceyhan, respectively.

The AHTS owner chose Ecospeed because of its proven performance in polar waters. The 65m, Ice Class 1A vessel will operate in the ecologically-sensitive Arctic region and comply with IMO Polar Code requirements.

According to Subsea Industries’ Turkish agent Orkun Çomuoglu, managing director at Amat Engineering: “This is a super ice-class vessel and required extensive hull protection for the operations the vessel will undertake.”

The Polar Code recommends abrasion resistant, low friction coatings to vessels operating in ice conditions. Ecospeed is certified for ice-going ships, and, moreover, is one of only a few such coatings which allows the thickness of the steel of the ice belt to be reduced when a certified coating is applied. This gives a significant financial benefit during newbuild projects

“There is a risk that conventional anti-fouling paints can degrade rapidly in polar ice, leach chemicals or leave paint fragments behind when ice impacts damage the coating. There is no such risk with a hard-type coating. Ecospeed and Ecoshield are tough, durable and highly abrasion resistant protective coatings.” said Manuel Hof, Production Executive at Subsea Industries.

“The British Antarctic Survey ships, RRS Ernest Shackleton, RRS James Clark Ross and HMS Protector, have all been coated with our products with great and conclusive results. Our coatings have also been selected for the newbuild research vessel RRS Sir David Attenborough, the biggest commercial shipbuilding contract in Britain for 30 years. Many other successful applications on ice going hulls have shown that our coating can withstand the impact of ice for many years on end, proving its superior strength and durability,” said Hof.

Ecospeed is applied in two layers of 500µm each, which offers a major advantage compared with other hull coatings. An antifouling coating system, including some of the newer silicone-based hull coatings, can easily involve application of four or five, or even more, layers. A two-coat application is said to be quicker, cheaper and more flexible. Because Ecospeed is designed to be long lasting, it only needs localised touch-ups during future drydocking, rather than removal and recoating.

“Ecospeed offers considerable advantages at both the newbuild stage and during drydocking,” said Hof. “The ease and speed of application, and the flexibility of overcoating times, mean that coating can be scheduled around the numerous other work that takes place in drydock, rather than interfering with other tasks. This was found to be a significant benefit for the two Turkish shipyards.”

The success and performance of traditional paint applications is defined by surface preparation and weather conditions during application, which are difficult to predict. The application of Ecospeed, however, is easier to adapt to the application windows that become available.

“You can apply the coating quite rapidly on a prepared surface and the possible overcoat time ranges from three hours to very extended periods of time. Depending on whatever suits the owner’s or the shipyard’s schedule the second coat can be applied within a couple of hours or after a few weeks or even months,” said Hof.

“The amount of time many ships spend in drydock is directly related to (re)painting the underwater hull. When this can be taken out of the equation for the choice of location and season for drydocking, then the story becomes a lot easier for superintendents, for the shipyards, for everybody involved.”