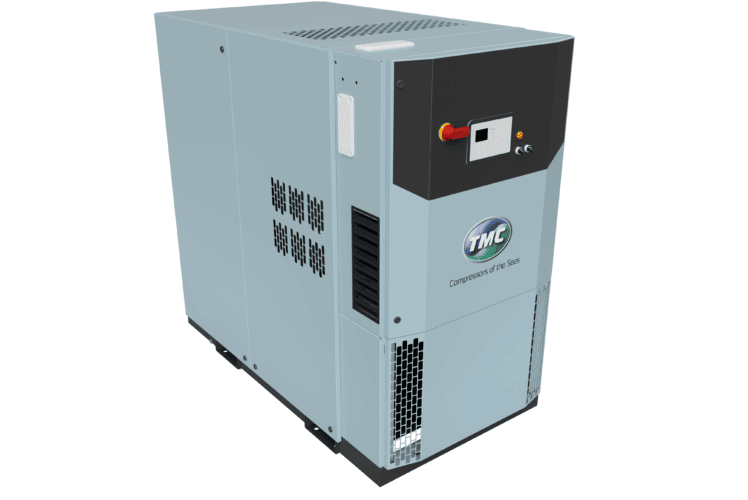 TMC Compressors of the Seas has developed and launched a new marine compressor range for use onboard vessels operating in the global shipping, maritime and offshore markets.

The crux of the new range is higher capacity output of control and service air, but with lower energy consumption, service requirements and – as a result – lower operational expenses (opex) and harmful emissions to air.

“We have sought inspiration from the automotive industry, which for several decades have made engines more compact while squeezing out more horsepower and reducing fuel consumption at the same time. In fact, for compressors between 150 and 235 kw we have increased capacity by up to 9.7 percent while energy consumption has been reduced by up to 9.2 percent. Or more power for less cost, to put it simply,” says Hans Petter Tanum, TMC’s director of sales and business development.

TMC has renewed a significant part of the company’s marine compressor range, from smaller units of 35 kW up to large compressors with 360 kW effect that are typically used onboard drilling rigs, FPSOs or other vessels requiring substantial amount of working and service air.

Common for all compressors is improved ventilation and more optimal el-cabinet, thereby making maintenance significantly easier. The new compressors are also equipped with a new, patented thermal mixing valve that provides accurate and effective cooling of the compressor, adapting to the environmental conditions. A new inlet valve with integrated control air components reduces the number of hoses to a minimum, which increases maneuverability when conducting maintenance work on the compressor.

The entire range is also equipped with new and improved filters that ensure less oil carry-over and significantly cleaner air.

“Unfortunately, there is still a widespread misconception that only oil-free compressors can produce oil-free air. The fact is that impurities such as oil, dust, particles and humidity are normally a result from the ambient air on board a vessel – not from the compressor. The only way to obtain clean, oil- free air is through proper filtration, regardless of whether the compressor is oil-free or oil-lubricated. Therefore, the new and improved TMC compressors will probably produce the cleanest air in the global marine, shipping and offshore markets,” adds Tanum.