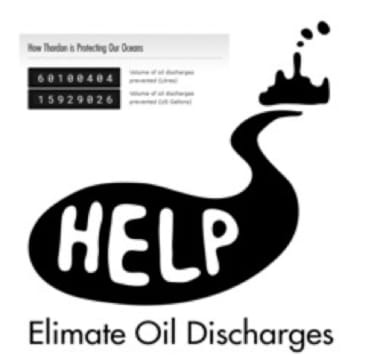 Thordon Bearings has developed a bespoke modelling tool capable of calculating the amount of operational oil prevented from leaking into the world’s oceans with each installation of a seawater-lubricated propeller shaft bearing.

To be launched officially on 22nd April to coincide with Earth Day 2016, the world’s largest environmental movement, now in its 46th year, the Oil Savings Calculator shows that more than 60 million litres of oil pollution has been saved to date.

“In our opinion the only acceptable propeller shaft stern tube oil leakage is zero.” said Terry McGowan, President & CEO Thordon Bearings. “Thanks to those vessels that have already installed seawater-lubricated propeller shaft bearings, over 60 million litres (almost 16 million U.S gallons) of stern tube oil has been saved from entering our oceans, seas, lakes and rivers. The Oil Saving Calculator is updated constantly and will continue to track our contribution to removing stern tube oil from our waters with the greater goal of completely eliminating this source of pollution.”

“As the world’s largest shipowner organisation, ITOPF supports measures designed to help our members and associates meet high environmental standards. Though our primary function is to promote effective response to marine spills of oil and chemicals worldwide, we also support the maritime industry in its efforts to reduce ship-sourced pollution and provide for more sustainable marine operations,” she said.

ITOPF last year presented Thordon Bearings with an environmental award for its oil-free COMPAC propeller shaft bearing system for its part in reducing the amount of oil entering the sea annually.

The oil saving calculation is based on detailed statistical analysis of the number of vessels that have been built with or converted to seawater lubrication, the 300 days a year each vessel is typically operational and an average oil leak of 6 litres (1.6 U.S gallons) per day per vessel.

Independent research carried out by New York-based Environmental Research Consulting indicated in 2014 that the total amount of operational oil discharges from ocean-going vessels could be more than 240 million litres annually. To add perspective, the oil pollution from the Exxon Valdez casualty of 1989 was 41.6 million litres.

“Recent changes to U.S Vessel General Permit requirements and the introduction of new Environmental Protection Agency rules have resulted in an unprecedented number of commercial vessels opting for seawater-lubricated bearing technologies, and while more can be done, ship owners are now much more aware of the positive contribution they can make in safeguarding the marine environment.”

Shipowners can monitor the positive impact the seawater-lubricated propeller shaft bearing is having on the marine environment by checking the Oil Saving Calculator counter at www.thordonbearings.com.

“The counter provides a good indication as to what we as a company and the shipping industry in general can achieve if we continue to work together to develop eco-friendly solutions,” said Carter.

In November, Thordon Bearings was presented with the Tanker Shipping & Trade environmental award for its COMPAC seawater-lubricated propeller shaft bearing. The technology has also been nominated in the Seatrade 2016 Awards’ Clean Shipping category and the technology category of the Green4Sea Awards.