Feature: The power of wind 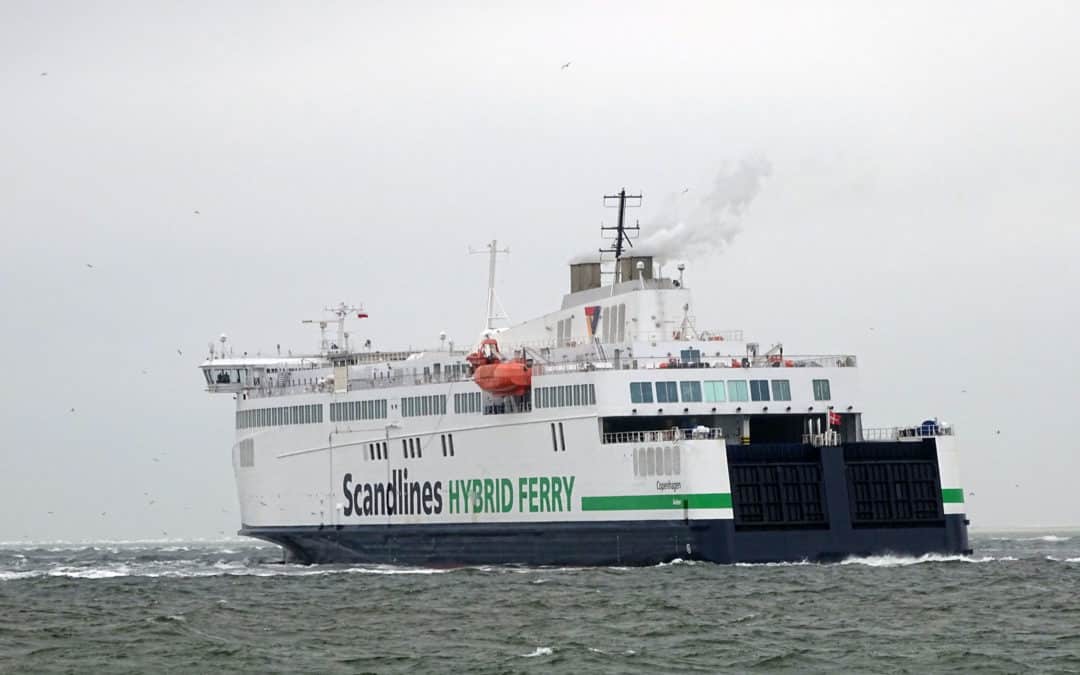 There is a considerable amount of interest at present into alternative ways to reduce ship emissions. These range from using alternative fuels, power generation through solar power, and wind assisted propulsion.
“The recently held European Shipping Week was a good opportunity to discuss the Commission’s proposed roadmap to a carbon neutral future,” says Tom Boardley, Secretary General, Cruise Lines International Association (CLIA). “Whilst not so many years ago, sustainability may only have been the topic of a fringe meeting, it is now taking centre stage, and rightly so.”
Sustainability is certainly now in the DNA of the cruise industry. “I was particularly pleased, therefore, that CLIA was able to host a session during the week to discuss the strides that the cruise industry is making towards decarbonisation,” he explains. “With representatives from the European Commission, cruise lines and ports, the discussion was wide-ranging and touched on how value creation, sustainable growth and responsible tourism can all go hand in hand.”
He continues; “Some of the most exciting environmental innovations can be found on cruise ships. Cruise ships are constantly testing new approaches – whether LNG, battery use, or other alternative fuels – but innovation requires time, investment and collaboration if it is to be scaled up effectively and safely.”

Wind propulsion
A recent IMO MEPC info document submission from the Comoros flag highlighted the benefits of wind propulsion and its necessary place in the decarbonisation discussions.
The key summary statement said; “The decarbonisation of shipping is the defining issue of the coming decade; however, currently, one of the leading decarbonisation technologies, direct wind propulsion, is receiving only very limited consideration in this critical debate over the future of shipping. Direct thrust from wind propulsion technologies offers a technically and commercially viable near-term solution that can already save 5% to 20% of fuel and associated emissions as wind assistance, with the potential for much higher benefits as the technology develops or is deployed on optimized newbuild ships. Wind solutions are cost-effective, do not depend on alterations to port infrastructure, and ensure shipowners have improved operational autonomy in mitigating the risks and uncertainties of being commercially dependent on the unknown cost and availability of alternative fuels. Therefore, the adoption of wind solutions will greatly assist the global fleet in reducing net emissions in the short-term, reducing the carbon intensity of the whole fleet, and better enable it to meet IMO GHG reduction targets.”

True wind
A true classic in ship propulsion is also celebrating a comeback: Scandlines will be using the power of wind onboard its hybrid ferry Copenhagen, with the help of a 30m rotor sail. “Quite a number of companies and consortiums are experimenting with wind-assisted propulsion for commercial vessels. Several technologies have proved their feasibility, and others are moving into that direction,” says Hasso Hoffmeister, Senior Principal Engineer at DNV GL. In response to these developments, the classification society has expanded its rules for wind propulsion.
Scandlines has been operating with hybrid ferries, thereby reducing its CO2 emissions on its routes between Germany and Denmark since 2013. With the addition of wind power technology developed by Norsepower Oy Ltd on the Copenhagen, the emissions on the route between Rostock and Gedser will be reduced even further.
With the decision to install a rotor sail, Scandlines is implementing the almost 100-year old concept of the Flettner rotor, thus investing in environmentally-friendly wind power technology. The Norsepower rotor sail is the first data-verified and commercially operational auxiliary wind propulsion technology for the global maritime industry.
The rotor sail is a rotating 30m tall cylinder which uses the Magnus effect: When the wind meets the spinning cylinder, the airflow accelerates on one side of the cylinder and decelerates on the opposite side of the cylinder. The change in the speed of airflow results in a pressure difference, which creates a lift force that is perpendicular to the wind flow direction. The longitudinal component of this force helps to push the ship through the water.
The technology has the optimum effect when it is windy and the wind comes from the side. The route between Gedser to the north and Rostock to the south is almost perpendicular to the prevailing wind from the west, giving Scandlines favourable conditions for using rotor sails on the crossing.
By installing a rotor sail, Scandlines believes it can reduce Copenhagen’s CO2 emissions by around four to five per cent.


Rotor sail preparation
The hybrid ferry M/V Copenhagen was prepared for the rotor sail during a yard stay in November 2019. A steel foundation was established and cables were pulled. Furthermore, the navigation light was relocated. The actual rotor sail will be mounted in Q2 2020. 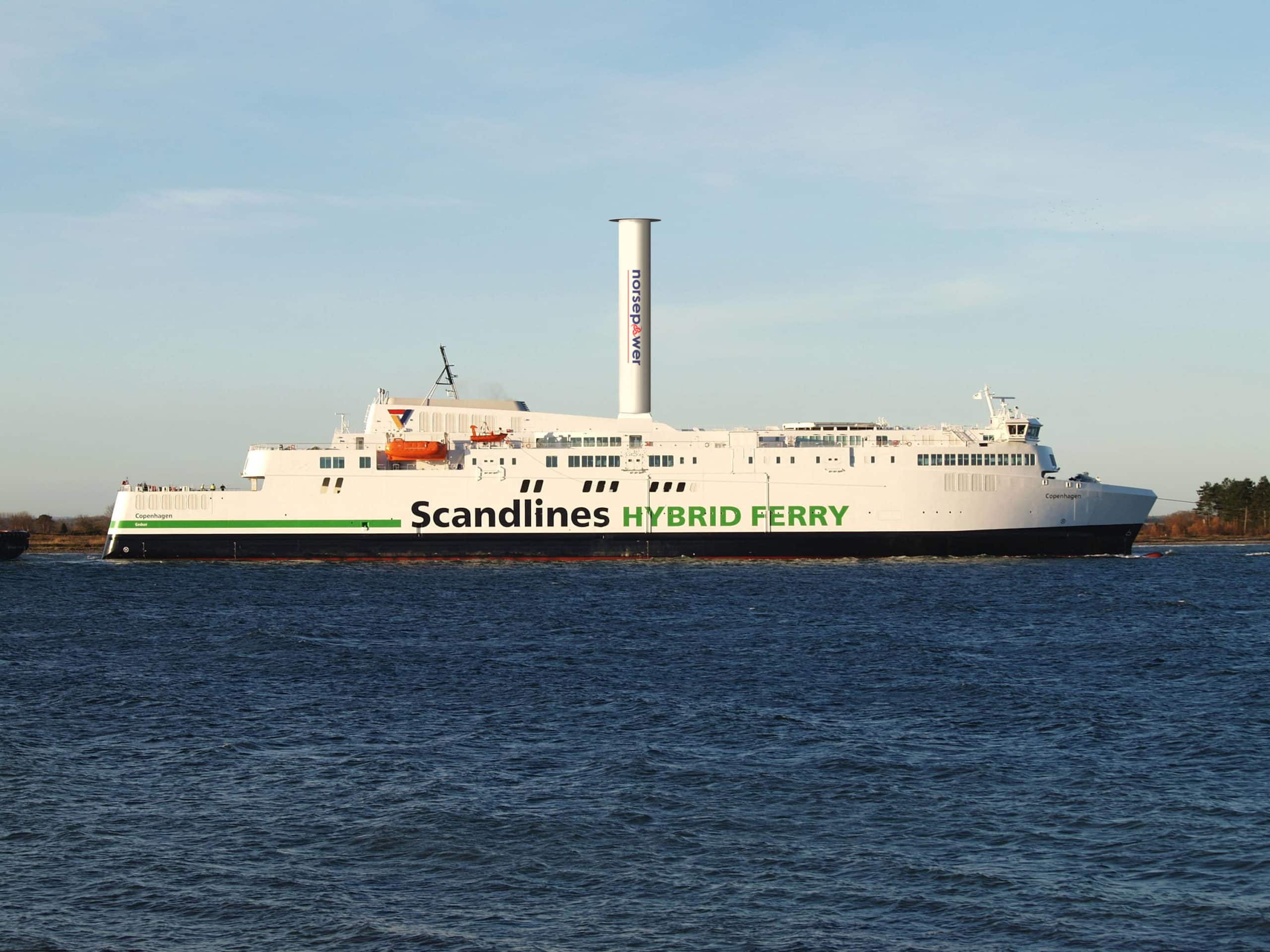 First retrofit
Another key move forward in the adoption of wind-assisted propulsion started recently in the North Sea. The first retrofit an eConowind Ventifoil wind-assist system was carried out during the docking of Jan van Dam Shipping’s Ankie in January at the Royal Niestern Sander shipyard. This was only six months after signing the contract. “The good and close cooperation between eConowind, Van Dam Shipping and Niestern Sander resulted in a pioneering project, which was completed within the planned installation period,” states Bart Volgers.
The modular Ventifoil units are in the form of wings with vents and an internal fan that uses boundary layer suction for maximum effect. This installation features two, 10m wings that will generate significant force, allowing the vessel to reduce motor power and thus save energy. In a second step, the units will be extended by a further six metres.

First test
The 3,600 DWT general cargo vessel Ankie, made its first voyage with the two wings installed, sailing for Wagenborg from Delfzijl to Hamburg, onwards to Norway and then back to Rotterdam.
“We take an active part in the shipping industry’s de-carbonising energy transition,” states Wagenborg. “Together with our stakeholders, such as our affiliated captain owners, clients, investors, employees and suppliers, we accept sustainability challenges to reduce our environmental footprint. We are happy that Jan van Dam, who has been sailing for Wagenborg for over 26 years now, picked up the gauntlet resulting in this Ventifoil project.”
For eConowind BV, located in Groningen, the Netherlands, it is the first commercial installation of their Ventifoil system. The wind-assist system was developed over the past three years supported by an EU backed grant, and this first voyage marks a significant milestone for the company in bringing their technology to a shipping market eager to deploy credible decarbonisation solutions. 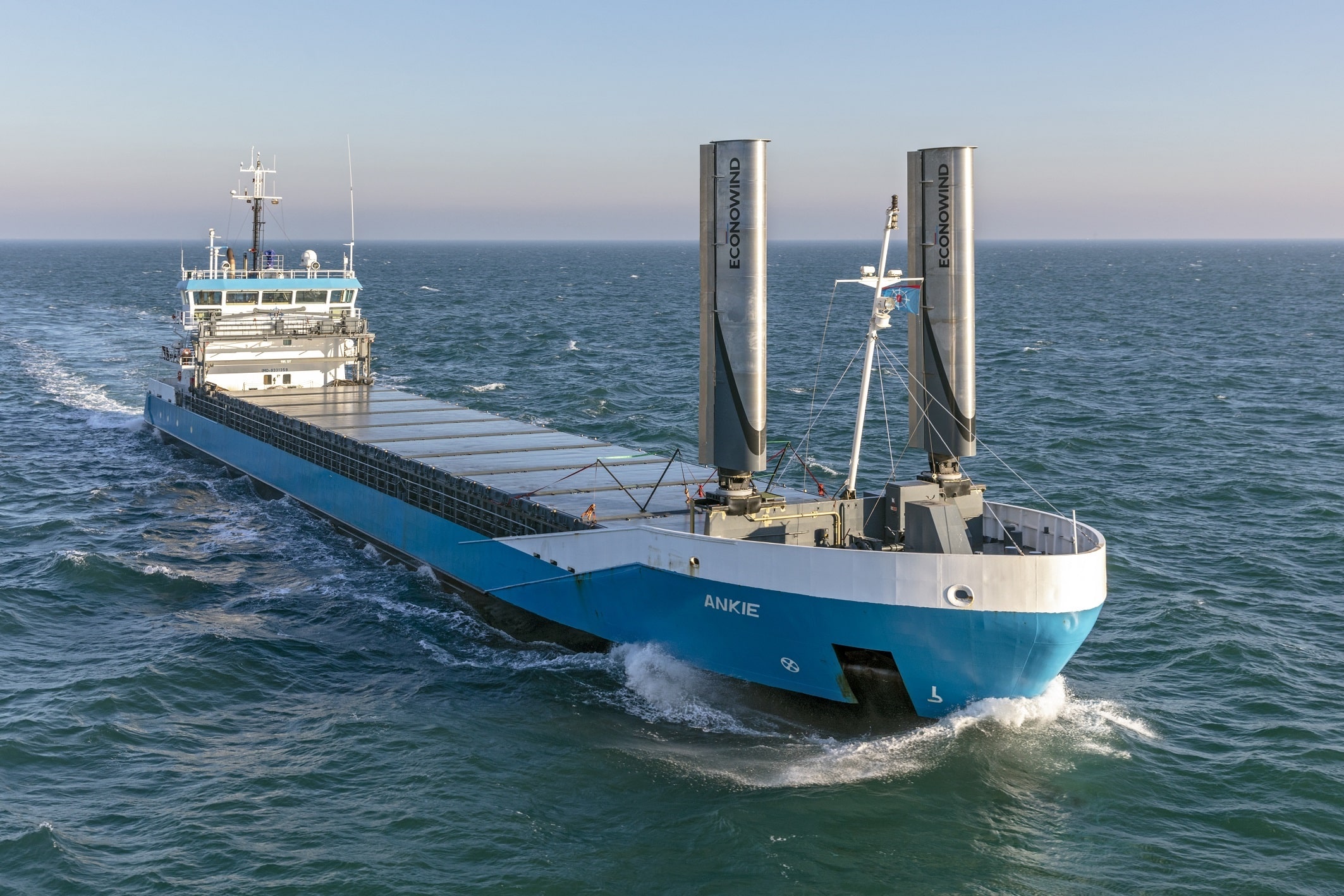 The Ankie, made its first voyage with the two wings installed

Wind assisted pilot
In another wind assisted project, EDF and Neoline signed a specific agreement for the issue of Energy Saving Certificates (ESC) in December 2019.
Based on the Neoliner, a 136m long pilot vessel with 4200 square meters of sail, EDF has conducted R&D studies to quantify the energy savings that can be achieved. It is estimated that the NEOLINE mainsail propulsion vessel model will save 600,000 MWh cumac over 15 years, which is equivalent to the production of three 6 MW wind turbines for 10 years or the energy consumption of a city of 9,000 inhabitants for 10 years.
By combining a regulated speed and optimising the management of the energy mix with the main wind propulsion system, Neoline’s solution could reduce energy consumption by up to 90%, and therefore the associated pollutant emissions, compared with those of a traditional cargo ship on the same route.
“We are very pleased to have been able to confirm the exceptional energy performance of our future vessels, in close collaboration with EDF teams, and to see our business model strengthened by this agreement,” says Jean Zanuttini, Managing Director of Neoline. “We welcome EDF’s investment in the energy transition of maritime transport.”
The ship not only combines the technologies from maritime transport in an innovative way, but also those from sailing, in order to allow an efficient transport in terms of logistics, economy and environment. With a commercial speed of 11 knots, advanced meteorological routing systems and trained crews, it is also able to test a set of complementary technologies to move towards zero emissions in the medium term, thus meeting the regulatory and societal requirements to accelerate the energy transition in maritime shipping.
With the support of leading players such as Renault Group, Manitou Group and Groupe Beneteau, who have demonstrated the logistical and economic relevance of the new service for the region’s industrials, Neoline plans to place an order for the construction of the first vessel with SAS Neopolia Mobility in the near future, with a view to commissioning the pilot line between St-Nazaire, St-Pierre & Miquelon, Baltimore and Halifax in 2022. 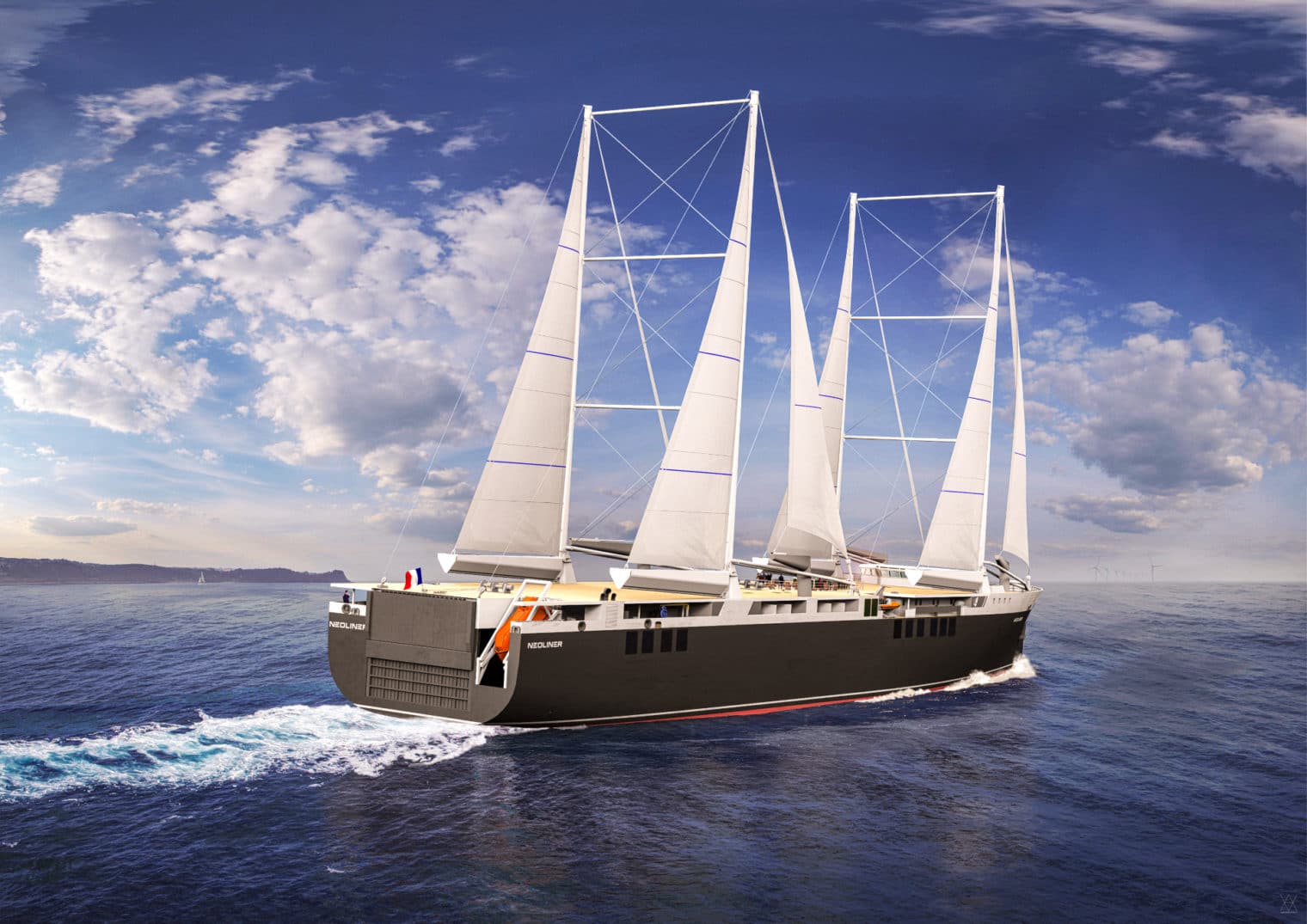 Latest Windship testing
In February 2020, key industry experts, prospective clients in the shipping, commodities and petrochemical sectors together with UK government officials attended the Mitchell – Wolfson Unit Wind Tunnel at the University of Southampton to view the testing of the most recent Windship Technology model. The wind tunnel test findings further validated the results of the latest Windship Technology CFD testing.
The patented UK designed Windship rig system is consistently regarded as the most powerful fuel and emission saving wind system in the market, which will materially help the shipping industry get closer to achieving its 50% reduction in emissions by 2050, as required by the IMO. That organisation has recently acknowledged wind propulsion as one of the solutions for the shipping industry to meet decarbonisation targets, as outlined in the MEPC C75 Inf26.
The solution, known as the Windship Auxiliary Sail Propulsion System (WASPS), uses fixed wing sail technology, whereby three 35m high masts installed on the deck of a vessel will each have three aerodynamic wings fitted to exploit the power of the wind. The system allows reductions in engine power to be made in order to achieve the same speed and so maximise fuel saving and emissions reduction.
Without significant mitigating action, it is projected that the global shipping industry could account for almost a fifth of carbon emissions by 2050. Windship’s solution will be able to save a minimum of 30% of the CO2 emissions annually.
The Windship system, combined with reduced engine revolutions and other ship optimisation, could save up to 80% of fuel and emissions. This aspirational approach will bring closer the possibility of a Carbon Neutral ship well in advance of 2050.
Simon Rogers, Technical Director said, “We are delighted with the results of the wind tunnel testing and they further illustrate how we will help the shipping industry to make a significant reduction in CO2 emissions. We are in discussions with potential development partners to build and install the prototype system.” 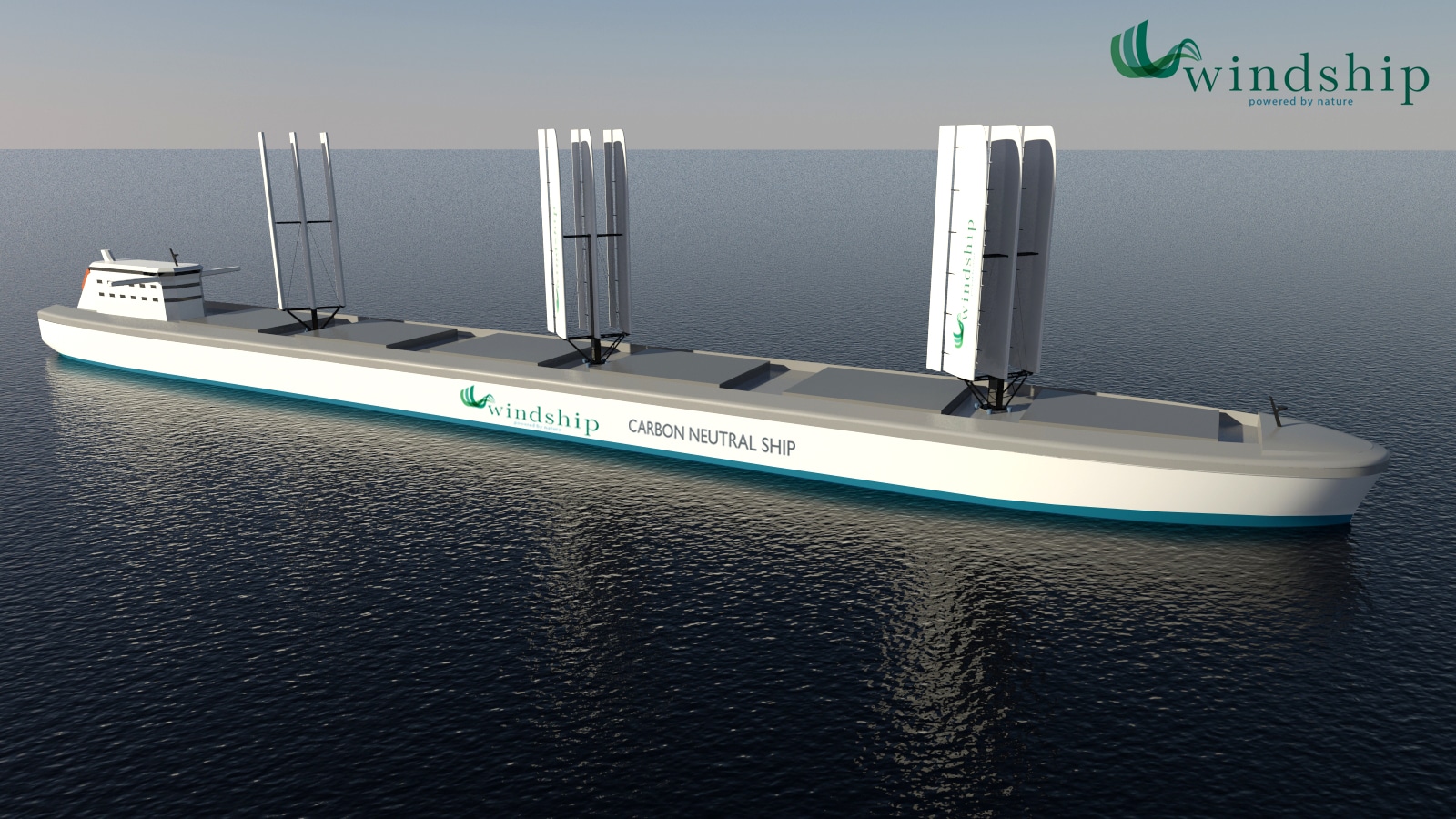