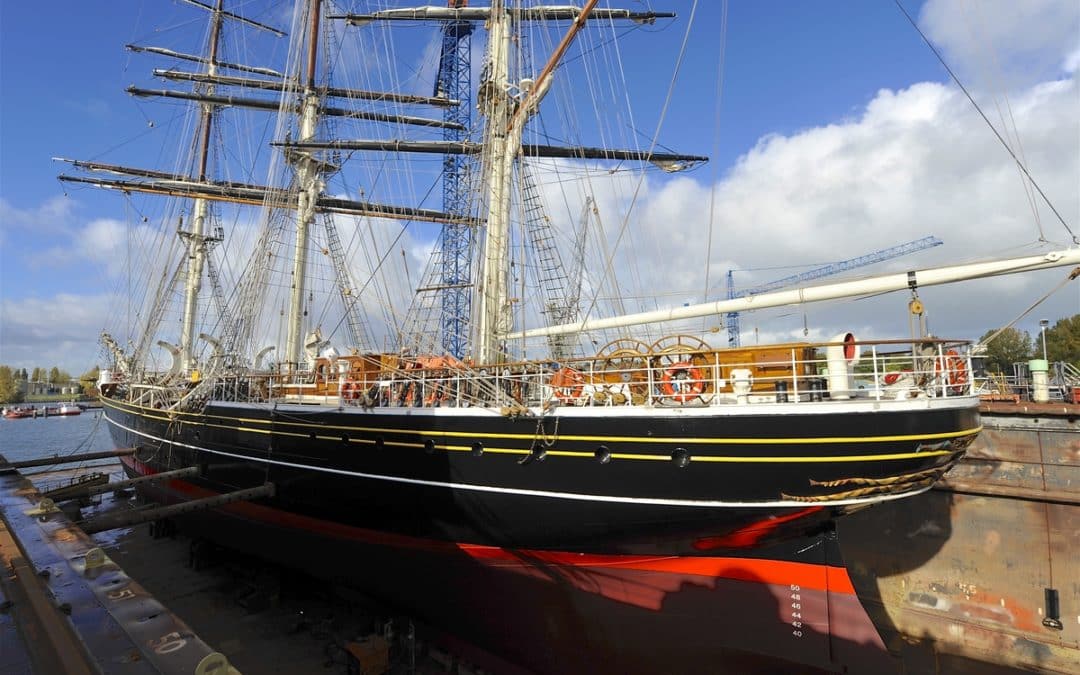 The 76-metre, fully-rigged sailing clipper Stad Amsterdam has entered the floating dry dock at Damen Shiprepair Oranjewerf in Amsterdam for over three weeks of inspections, maintenance and refurbishment. Built at the same yard and launched in 2000, she is owned by the City of Amsterdam and Randstad Holding NV. She spends 11 months each year operating luxury and adventure cruises and undertaking promotional events on behalf of its owners and other corporations on both sides of the Atlantic.

The intensive schedule of the Stad Amsterdam leaves it with a brief window from mid-October to mid-November for its annual maintenance and any other additional works that may be required. Damen Shiprepair Oranjewerf provides the facilities and many of the skills required, and hosts the various subcontractors with the specialist skills needed to maintain a sailing ship. JR Ship Management, which is responsible for the technical management of the ship including all certification, is overseeing the project in cooperation with the master, Captain Moritz Kuhlenbäumer, and his team.

As well as the biennial dry-docking, the works this year include the fitting of new mounts for the engine, the blasting and recoating of the water and waste tanks, and the repainting of the hull above and below waterline. The figurehead will also be removed and receive a fresh set of (painted) clothes while the tenders and life rafts will undergo regular maintenance. The running and standing rigging along with the yard arms will also be checked and replaced where necessary.

Down below, the interior will receive new paintwork in some areas and much of the upholstery will be renewed. The ship’s IT system will also be replaced to bring it up to the latest specifications.

The Stad Amsterdam will spend a total of two weeks in dry dock and another one and a half weeks alongside at Damen Shiprepair Oranjewerf. All repairs are scheduled to be completed by 12 November and she is expected to depart for the Caribbean on or soon after 15 November.

“We are strong believers in having a good relationship between ship and shipyard,” said Evert van Dishoeck, Director of Rederij Clipper Stad Amsterdam. “Damen Shiprepair Oranjewerf has all the facilities we need for a ship like ours, and good, highly skilled people.”

Jeen van der Werf, Commercial Manager at Damen Shiprepair Oranjewerf, added: “We have had a very long relationship with the Stad Amsterdam, given that she was built here, and we look forward to welcoming her and her crew here every autumn. We really enjoy working on the clipper; everything is different compared to a regular vessel and in many ways she is more like a yacht than ship. The cooperation with the crew is also excellent. It’s a real pleasure to have her here.”