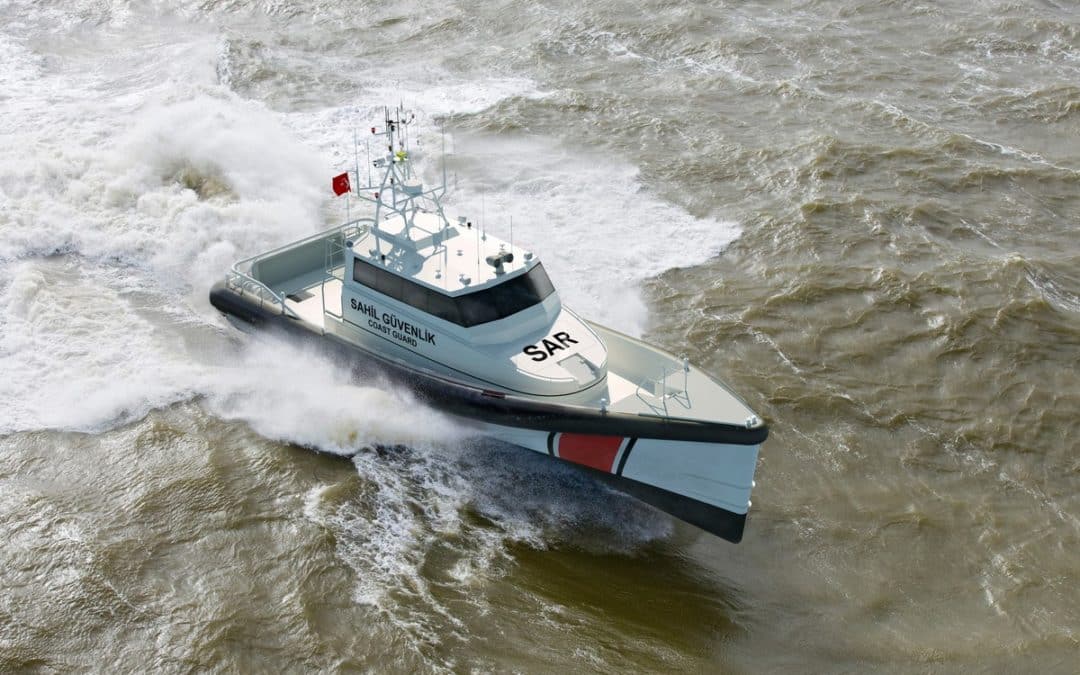 Damen has signed a contract with the International Organisation for Migration (IOM) in Ankara, Turkey for the supply of six, state-of-the-art Search and Rescue (SAR) vessels for delivery in 2017. The boats are being financed by the European Union and will be operated by the Turkish Coastguard (TURCG), to support the refugees and migrants rescue operations.

The award-winning Damen SAR 1906 is a state-of-the-art SAR craft and is the result of a five-year R&D programme initiated by Damen in partnership with the Royal Netherlands Sea Rescue Institution (KNRM), Delft University of Technology and De Vries Lentsch Naval Architects. The SAR 1906 is an all-weather, self-righting vessel with an aluminium hull and a composite wheelhouse. The hull design is based on Damen’s Axe Bow technology, adapted for the specific operations of rescue boats. It has a top speed of 33+ knots.

“These boats will be built in Turkey for Turkey,” says Damen’s Boran Bekbulat. “They will be built at Damen’s Turkish Shipyard in Antalya (DSA) where we have all the facilities necessary to fabricate both the composite superstructures and the aluminium hulls. Damen and its SAR 1906 were selected to fulfil the Turkish Coastguard’s need for new SAR vessels based on its innovative design and its ability to deliver them within a short time frame. We already had vessels under construction in our production line which allows us to deliver the first two boats in the first half of 2017. Moreover, our people in Antalya are committed to beating the challenging delivery times, realising the importance of the SAR boats’ mission. Having a good cooperation with all involved parties in the lead of IOM, we are all proud of taking a part in the EU’s project for TURCG. The fact that they will be built in a Turkish shipyard – Damen Shipyards Antalya – and that Damen is very much committed to the country were also positive factors.”

The vessels will be deployed by Turkish Coast Guard along Turkey’s coast line, giving assistance to refugees and migrants fleeing nearby conflict zones. Although relatively compact, the 19-metre SAR 1906 can carry up to 120 survivors.

The delivery schedule calls for the first vessel to be delivered within 12 months of the contract signing, however DSA plans to beat that by delivering the first in May next year and the second the following month. All six will be commissioned by the year end.