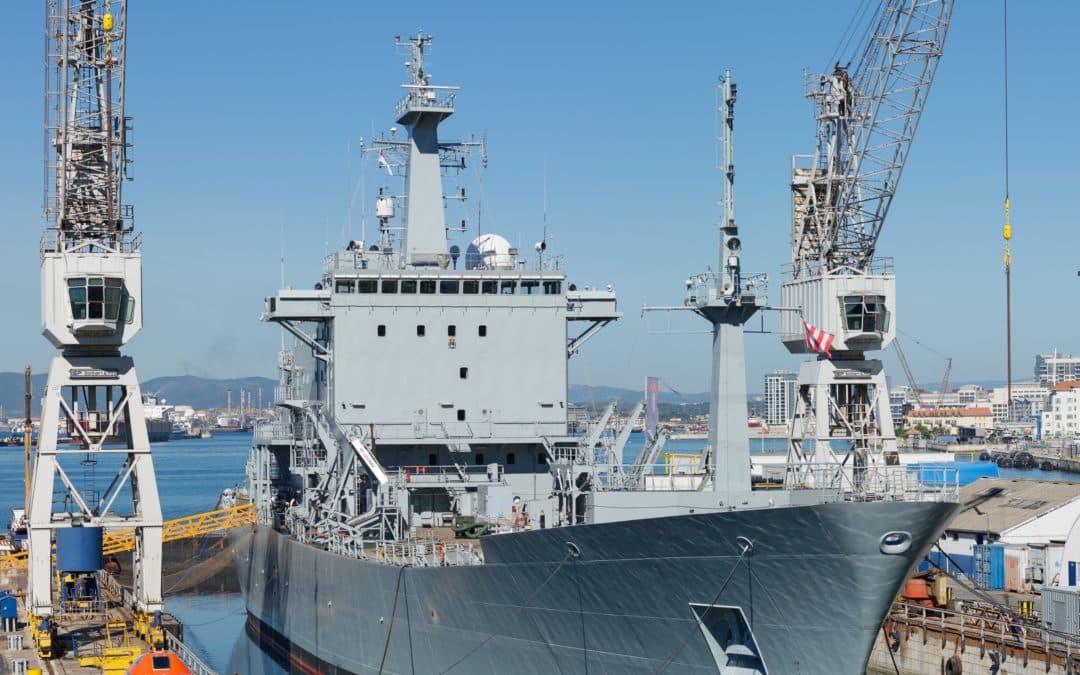 “Recent world events suggest that the Royal Navy will highly prize support from strategically-located facilities that can deliver vessels back into service on schedule and to high quality standards,” said Richard Beards, Gibdock Managing Director. He highlighted the naval roots of the Gibraltar facility, and the fact that several senior Gibdock managers began their careers when the yard fell under MOD oversight.

John Taylor, Gibdock Operations Director, added: “The infrastructure at Gibdock was built to last and is actually similar to that in place at Babcock’s Devonport Royal Dockyard in the UK. The yard’s lay-out, some of the equipment in use and key personnel are fully aligned with working on Royal Navy projects. In addition to the favourable weather that makes navy work in Gibraltar possible year-round – even on deck – our managers have a background in MOD contracts enhanced by running a commercial shiprepair yard.”

The main body of work took place with HMS Scott afloat in Gibdock’s No.2 drydock. Tasks included capability upgrades such as: installing davits port and starboard for Pacific 24 RIBs; modifying the CO2 containment module and upgrading compartment doors; and fitting a new gas detection system for the refrigeration system. Other work included: upper deck preservation; the replacement of the existing lights with LED; cleaning of ventilation ducts; fitting new furniture in the sickbay; flushing of the main engine cooling system; and various other planned maintenance activities on the ship’s equipment.

Paul Cano, Gibdock Ship Manager for HMS Scott, is one of Gibdock’s senior staff whose working life at the yard began under MOD management. “Our task has been to deliver MOD standards win a commercial timeframe. Feedback is very positive on our rhythm of work and problem-solving approach,” he said.

Kevin Murray, MOD UK Group Technical Superintendent, who oversaw the repair period said: “Gibdock demonstrated a flexible and proactive approach to the work package that delivered a quality product on time. We’ll now look to build on this relationship for future opportunities given the strategic positioning of the yard.”

“HMS Scott follows up on our completion of works on the multi-role Royal Navy hydrographic survey ship HMS Echo in 2014,” said Mr Beards. “Now that the MOD has demonstrated its confidence in Gibdock, we believe that a significant reactivation of Gibraltar’s historic role as a naval repair yard could follow”.

Delivered in 1997 by Appledore Shipbuilders, HMS Scott is 131m in length and 22m across the beam. The oceanographic survey ship can remain at sea for up to 300 days a year.