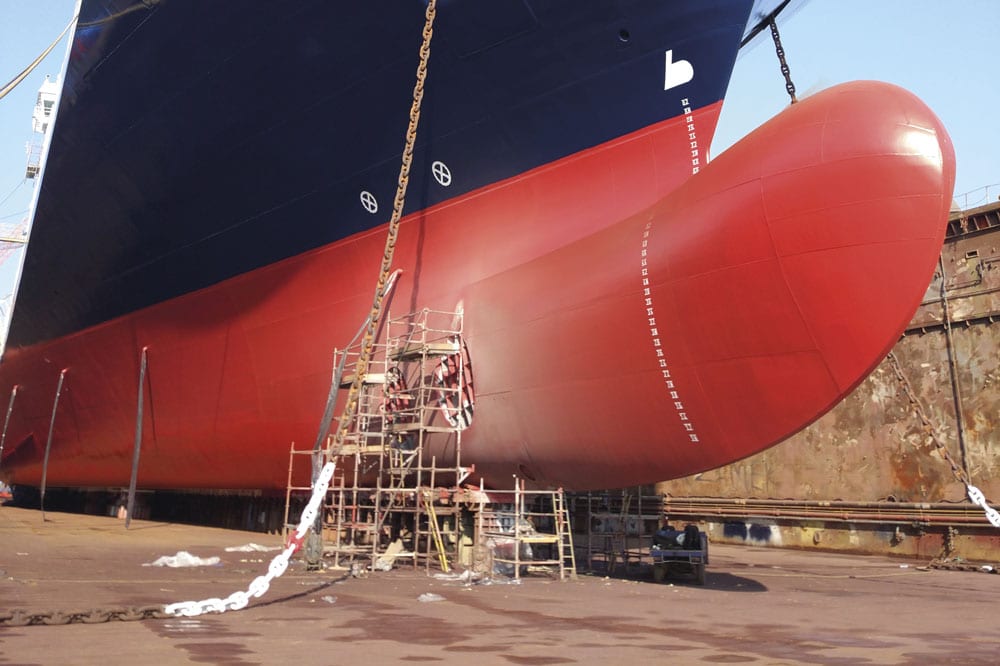 Last July the underwater hull of the roro vessel Magnolia Seaways was coated with Ecospeed in Gdansk, Poland. This non-toxic and easy washable coating system will keep the hull smooth for the service life of the vessel with minimal repair and no replacement. At the same time the rudder of the ship was treated with our Ecoshield coating which was designed specifically to protect underwater gear against cavitation and corrosion damage.

The 200-meter roro vessel is currently sailing a fixed Ghent-Gothenburg-Immingham route and is owned by DFDS. In 1866 several small Danish shipping companies merged to form what has come to be the oldest major shipping company in Denmark: DFDS – “Det Forenede Dampskibs-Selskab” (The United Steamship Company). The company is still sailing on some of the same routes begun in the 1800s.[1]

DFDS takes its environmental responsibility very seriously. “In 2006 DFDS decided that we could be most influential by engaging our community with marine conservation issues, by providing educational material about the wildlife of the North Sea. It was at this point that we formed a partnership with marine conservation charity ORCA. ORCA is one of Europe’s leading whale and dolphin conservation charities, and is dedicated to forging links between people and the sea.”[2]

“DFDS is committed to reducing its energy consumption and impact on the environment by improving its operations and activities on an ongoing basis. Our environmental work is therefore focused on reducing emissions from ships, as well as on developing and implementing new environmental technology for use at sea.”[3]

Ecospeed ties in perfectly with the ecological ideas of DFDS. The coating offers a TBT-free, copper-free, biocide-free and silicone oil free solution for the protection of the underwater hull. The Ecospeed hull protection and performance system is today’s Best Available Technology for reduction of fuel consumption, GHG and other emissions through hull hydrodynamics and fouling control.

Stringent independent tests were carried out in the Netherlands to provide scientific data and to authenticate the non-toxicity of our coatings. Similar testing was conducted in Canada with the same results. This research proved that the coatings are 100% non-toxic and that there is no negative effect on the water quality or the marine environment at any point of their use. The emission of massive amounts of VOC and zinc anodes associated with conventional coating systems is reduced to almost zero.

The definite biofouling solution: clean before you go

Over the last several years there have been concerns that non-indigenous species (NIS) are transported by fouled hulls even more than in ballast water. Once a hull becomes heavily fouled there is an increased risk of transporting NIS. This needs to be remedied either by out-of-water removal or by underwater cleaning. In this respect, underwater cleaning has come under some scrutiny out of fear that viable NIS are released and spread by the operation, rather than contained and disposed of. Several ports and countries have banned underwater cleaning out of concerns of pulse release of biocides and an increased risk of transferring NIS.
Another important outcome of the independent tests was the submission of the results to port authorities and environmental agencies worldwide in order to allow the underwater treatment of our coating systems. As a result several economically important ports have made an exception to the ban and this only for our coatings. These ports recognize the negative impact of biocidal paints and want to support environmentally safe solutions.

Underwater hull maintenance is carried out with specially designed underwater hull cleaning tools that simultaneously clean and optimize the smoothness of our coatings. This can be repeated whenever needed during the vessel’s lifespan without causing damage to the coating’s surface.