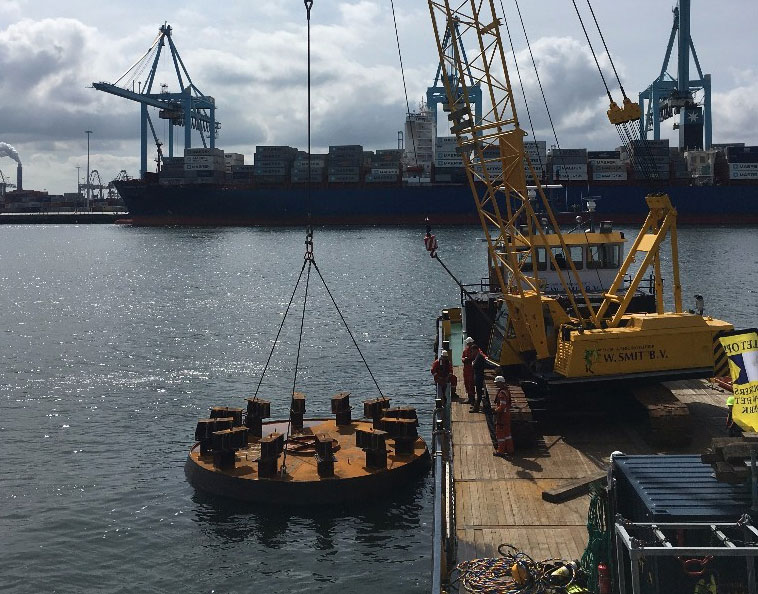 The FPSO was being towed from Europe to the Middle East after being assigned a new contract when it encountered problematic weather conditions.  The contract for the upgrade of the 30,000 bpd, Aoka Mizu, was awarded to Dubai’s Drydocks World and the vessel needed to be towed from Gdansk, in Poland, where she was in lay-up, to Dubai. During this passage, high sea states were expected, requiring the turret moonpool on-board to be closed off.

Rotterdam’s ROG Ship Repair, was awarded the fabrication and installation of the moonpool cover, with delivery required in a very short lead time. It took ROG just two weeks working 24/7 to fabricate this steel structure in their workshops in Waalhaven.

After fabrication, the cover was transported to Maasvlakte, Rotterdam, where it was positioned and coordinated on the seabed, ready and waiting for the arrival of Aoka Mizu. When the FPSO arrived, under tow, she was moored in a position precisely above the cover. ROG then came on-board to mount the hoisting arrangements.

Before lifting the cover into the Aoka Mizu, air pressure hoses were connected underneath the cover to ensure that it was not sucked onto the seabed. Divers connected the cover to the hoist and ROG began the controlled lift, which hoisted the moonpool cover into the correct position. Once in position, sea-fastenings were installed and secured.