Opinion: The Matter of Biofouling 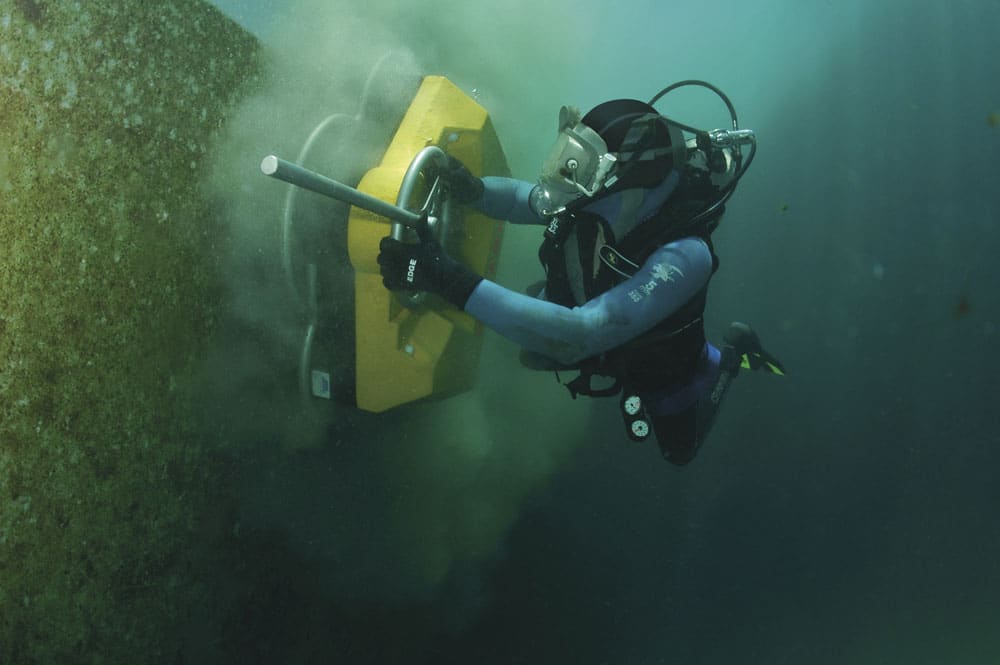 by Hydrex
Recently there has been a lot of discussion about biofouling. A word coined to describe marine life attached to ship hulls, it is seen as a ship speed breaker, a destructive factor to hull coatings and a cause of alien invasive species. To call it fouling is in fact a misnomer. It is marine life and it was there first, long before any ship or boat had entered any water.

The situation with marine invasive species is twofold being carried around the globe in ballast tanks on the one hand and riding on the outside of ship hulls on the other.

In ballast tanks the problem comes down to any life that exists in water. From bacteria to larvae to small fish and anything in between. Because it is traveling in dark conditions with zinc anodes present, this problem is much smaller than the real problem posed by the ship hull.

Allegedly around 600-700 species are traveling on the outside of ship hulls. Six years ago Subsea Industries published a White Paper on the subject titled: Invasive Aquatic Species – A proposed alternative solution. In it the company gave a summation of the problem and how to correctly deal with it. The basic viewpoint is simple: we do not want to handle this with a toxic solution. There are very good reasons for this.

A very negative and toxic influence is exercised on marine life traveling on the hulls. It is proven by various publications that animal life and algae are influenced by the many varied toxins in the coating. The continued toxic presence on and around the hull, from pesticides to heavy metals to pharmaceutical derivatives, have a detrimental effect.

By traveling on a toxic ship hull the animals become more resistant. In the white paper Subsea industries called these gladiator species because they have become chemically stronger than the marine life of the different environmental zones they arrive in. The local populations are less adapted and give in to the newcomers. This alone is reason enough to look for other solutions.

The viewpoint is that there is no such thing as a toxic solution for the mitigation of invasive species. As we do not know exactly what we are doing to marine life, we cannot see this as a responsible action. We have no idea how much and how many we are thus influencing. There is no control on the process.

What needs to be considered is the toughness and tenacity of marine life. Amongst the oldest species on this planet, they have developed an exceptional resistance to external factors and that does include chemicals and heavy metals.

With toxins we either kill the marine life or render it sick. This biomatter will then enter the food chain to a greater or lesser degree.

The situation thus created requires a lot more attention and a much closer look from all the players involved: authorities, scientists, technology developers, manufacturers and regulators.

From Subsea Industries’ side and as a group that has pioneered a totally non-toxic approach, they have firmly established that with their solution they have no influence whatsoever on marine life.

To achieve an environmentally safe solution for ship hulls, they have looked at how to safely wash ships before they leave port.

A full washdown of the ships is the best solution. It requires a system that allows to clean any size ship in less than an hour on a coating that will not emit particles.

Subsea Industries’ sister company Hydrex is now working on underwater hull cleaning technology that will produce cleaning rates of 100.000 m² per hour or more. It does not require divers or visibility and can be used in a current.

This means that even the biggest ships can be cleaned in a very short time. They can be washed before they leave port and sail to a different environmental zone free of biofouling. When they arrive they can discharge and load again and when they leave they can be cleaned in the same fashion. During continued sailing, no marine growth is acquired on the hull as this only happens during stops.

This process also considerably optimizes the speed of the ships. Fuel consumption will be at its best attainable level and large fuel savings are thus achieved. These alone will pay for the effort many times over.