Naval and Security to headline at SMM 2020 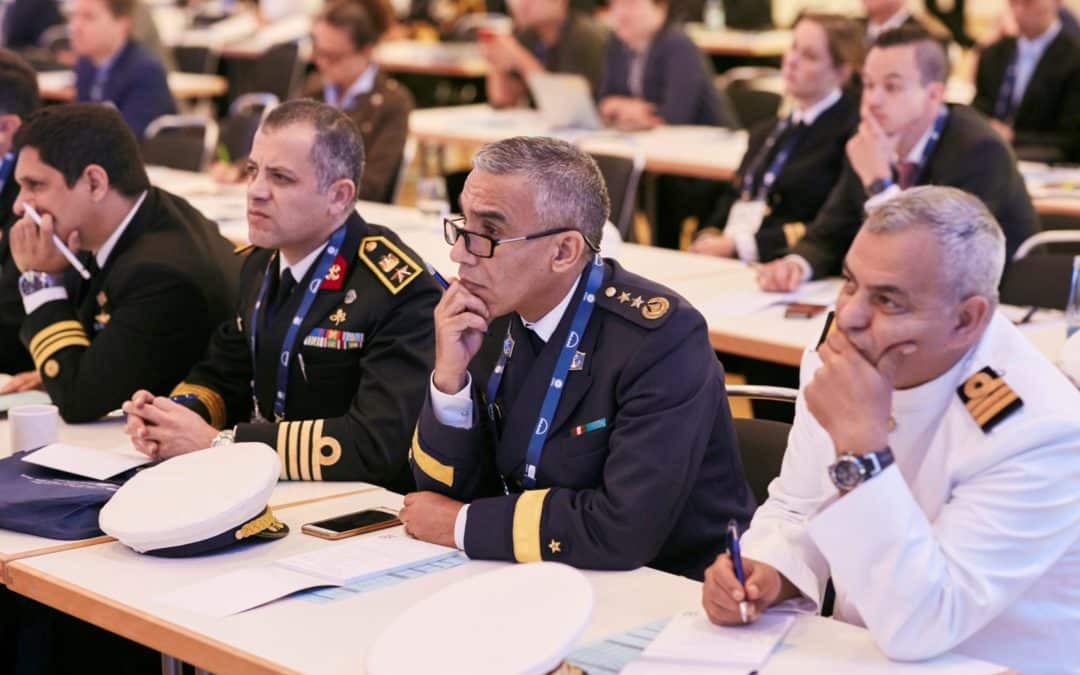 At the leading international maritime trade fair from 8 to 11 September 2020, numerous exhibitors will showcase their security-related innovations, and international experts will discuss military defence challenges, technology developments and cyber security. MS&D, the international conference for maritime security and defence, will provide a perfect stage for this exchange of knowledge and expertise.

Hamburg, 03 March 2020 – Specialised materials, sophisticated locating technology, efficient combat and weapons systems: naval shipbuilding is complex and requires an enormous amount of know-how. To support the domestic industry, the German federal government has raised naval surface ship building and electronic warfare to the status of a Key Technology. “We want to preserve and strengthen our domestic key industries and strategically relevant development capabilities in Germany and the EU,” said Minister for Economic Affairs Peter Altmaier. SMM in Hamburg provides German, European and international naval suppliers and shipyards with an ideal opportunity to present themselves to an expert audience. From antipiracy missions to protecting ports and sea routes, through to cyber security, SMM 2020 will provide industry visitors as well as naval and coastguard delegations with many opportunities to familiarise themselves with exhibitors’ security-related innovations, especially along the Security & Defence Route. The 29th edition of the leading international maritime trade fair will be entirely dedicated to the current transitional phase of the maritime industry. “Our motto, ‘SMM 2020 – Driving the maritime transition’, applies to four segments: Digitalisation, Environment, Energy and Security. The Security Transition theme will explore maritime security and defence technologies. For example, the use of artificial intelligence (AI) and autonomous systems opens up an entire range of new options to this industry,” says Claus Ulrich Selbach, Business Unit Director – Maritime and Technology Fairs & Exhibitions at Hamburg Messe und Congress GmbH. SMM visitors will be able to learn at many exhibition stands and in personal conversations with subject matter experts how these technologies can be applied in specific situations.

Efficiency enhancements, higher speed, smaller crews: US President Donald Trump has approved a budget of roughly $207 billion for the expansion and modernisation of the U.S. Navy during the fiscal year 2021 alone. A portion of that sum has been earmarked for unmanned surface ship technology. The Pentagon is planning to build a total of 17 autonomous combat vessels. Having commissioned its experimental autonomous unmanned surface vehicle Sea Hunter in 2016, the US is the global pioneer in this area. The robotic vessel has two major advantages: No human lives are risked because the craft does not require a crew; and its operation is much cheaper than that of a conventional destroyer. Instead of causing operating costs of US$700,000 per day, Sea Hunter costs as little as $20,000 per mission day thanks to the use of autonomous solutions, says the US research unit DARPA. “There’s broad agreement across the government that our Navy needs to grow, we need to pursue unmanned technologies, and we need to solve tough technology and policy issues associated with unmanned systems,” said Admiral Michael Gilday, Chief of Naval Operations. The Australian Royal Navy is likewise using new technologies to reduce its operating and personnel costs. For example, a 3D printing system was put on board the frigate HMAS Parramatta during a manoeuvre to produce various spare parts. “We were able to reproduce defective parts to restore the full functionality of our equipment. That is a great success for the team,” says Nathan Little, an experienced naval officer and Electronic Communications Manager at the Royal Australian Navy. 3D printing will feature prominently at SMM, as well: “We are again setting up our Maritime 3D Printing Show Area to provide an extra stage for this fascinating technology. To satisfy the enormous interest in this technology, we have doubled the exhibition space compared with 2018,” says Carin Steinbach, deputy project manager for SMM.

As digital technology evolves and fleets are tightly interconnected by digital means, cyber threats increase, and not only for naval ships. “When it comes to cyber security, our protection is only as good as the weakest link,” said Margarethe Vestager, Executive Vice President of the European Commission for a Europe Fit for the Digital Age at the Munich Security Conference 2020 in February. Executives in the shipping industry are well aware that fending off cyber threats is of critical importance in shipping. 83 per cent of them continue to believe that cyber security is an “important” or “very important” issue, according to the current SMM Maritime Industry Report(CLICK).

How can shipowners brace themselves for new threats in the digital age? From antivirus software and 24×7 protection by IT experts to effective defences against system sabotage, the International Conference on Maritime Security and Defence (MS&D) held in Hamburg on 10 and 11 September 2020 during SMM will propose practical solutions.  Distinguished experts from science, defence organisations and the naval industry, and high-ranking naval representatives will be able to share views and experiences on this and other security topics.

Vice Admiral Lisa Franchetti, commander of one of the world’s most powerful naval units, will explain how the 6th US fleet helps stabilise the situation in the eastern Mediterranean Sea and the Black Sea.  Her participation in the conference highlights the international importance MS&D has achieved. What the European Defence Industrial Development Programme (EDIDP) holds in stock will be examined by Carsten Stawitzki, Vice Admiral of the German Navy and Head of the Equipment Department at the German Ministry of Defence, and Dr Hans Christoph Atzpodien, Chairman of the Federation of the German Security And Defence Industry (BDSV). Other focal topics include the effects of climate change, especially on coastal regions, and shifts in the geostrategic balance of powers, for example as a consequence of China’s growing dominance in Central Asia and the Asia Pacific region.

“We are excited that many high-ranking naval representatives will be attending MS&D again, including personalities like Vice Admiral Andreas Krause, the Chief of Staff of the German Navy. In his opening address at MS&D he will give an assessment of global maritime security and highlight future challenges,” says Jan Wiedemann, conference chairman and editor of NAVAL FORCES. This magazine is once again the conference partner of MS&D, which will take place at the Hamburg exhibition complex on Thursday, 10 and Friday, 11 September 2020. For further information on the programme, please visit https://www.smm-hamburg.com/

SMM, the leading international maritime trade fair, takes place at the Hamburg Messe und Congress exhibition complex every two years. From 8 to 11 September 2020 more than 2,200 exhibitors and roughly 50,000 visitors are expected to be at the famous port city. Covering more than 90,000 square metres of exhibition floor, SMM reflects the entire value chain of the maritime industry. Decision-makers, experts and multipliers from all parts of the world will gather at the exhibition, making SMM the foremost innovation platform of the maritime sector.