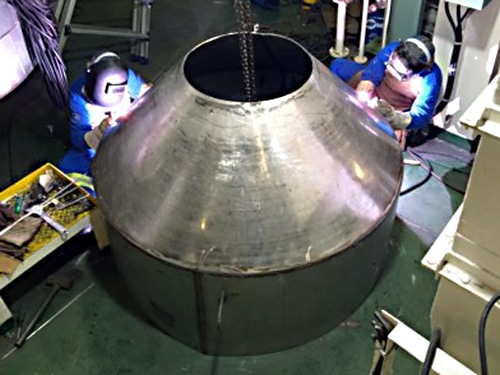 A major Greek ship owner client of Metalock Brasil since the 1980s experienced a fault in the inert gas generator cooling system of one of his vessels, which has triggered problems in the inner chamber.

The fault caused the chamber’s 316L grade stainless steel structure to shrink due to lack of cooling and other severe malfunctions, damaging the equipment.

With the inability to inert the oil-laden tanks, the shipowner had to remain with the ship anchored off Angra dos Reis, causing a significant commercial loss due to the interruption of the charter he made with a large Brazilian company.

The client, having had past experience over the years with Metalock Brasil’s high quality and efficient interventions, called them again to build a new inner chamber for the inert gas generator.

The initial project was to provide 12m² of sheet steel, with the classification society’s approval to conform and fabricate the chamber. But due to the need to carry out the work in the least possible time, the client preferred to bring plates already conformed directly from Greece.

Finally, the Metalock Brasil technical team, composed of welders, boiler fitters and other staff, together with the vessel’s crew, reconstructed in a record time the inert gas generator chamber.

The damaged part was removed using plasma cutting equipment, and then replaced by the welding of the new plates supplied. The welded parts were inspected with penetrating liquid and thus the entire process was approved by the DNV-GL classification society surveyor.