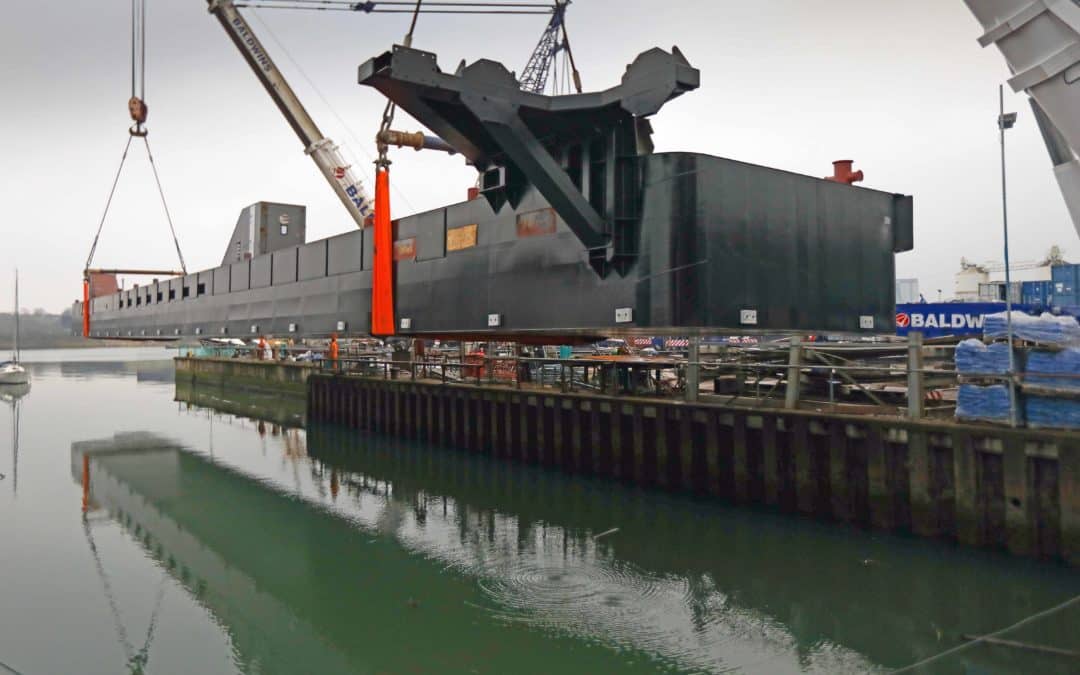 Marine engineering services firm SMS is midway through a significant contract for Woods’ Silver Fleet to build three huge pontoons for the Thames.
The works amount to circa 750 tonnes of fully fabricated steel pontoons and over 5,000 man hours of specialised, local, labour in Southampton, Hampshire, UK.
Chris Norman, the managing director of Southampton Marine Services (SMS), said: “This project is of significance not only to SMS but also the local ship building community.
“It’s the first time in 13 years, since the King George V dock closed in Southampton, that such a major marine fabrication contract has been won locally. It’s great to do and it’s even better to do it with local, British, labour.”
The project has a timeline of approximately 18 months. The work includes three new-build pontoons measuring 55m by 10m, 64m by 6.5m and 77m by 6.5m with the respective steel weights of circa 200T, 250T and 300T.
The final pontoon will be delivered later this summer. The methodology behind the build is specific to SMS’s localised footprint at Ocean Quay in Southampton – modules are prefabricated in the dedicated new-build shop, transported to the quayside and ‘pulled’ together for final assembly pre-launch on a specially engineered jig.
Finally, the shot blasting and painting is completed in an especially designed enclosure specifically engineered for the build. The first barge has been lifted into the water.
Bob Gray, project manager for the build, said: “The fabrication process for the build has been fairly straight forward.
“This week’s launch posed a few challenges namely the tandem contract lift utilising two Baldwins 1000T cranes.
He added: “It’s not often you get an opportunity to formally thank your suppliers but I think in this case, given the scale and significance of the project, it’s important to go on the record with special thanks to Houlder, Snijtech, Marmus, ML Fabrication and Jotun that are providing the 20 year paint scheme.”
The pontoons feature offices, mess facilities, crew engineering facilities, stores and event storage facilities plus a black water discharge system for the operators’ tonnage and newly improved passenger access. Wood River Cruises will be handling the mechanical and electrical installation locally in West Thurrock.
Chris said: “SMS’s fabrication expertise is clearly second-to-none when you look at what we’ve achieved here in Ocean Quay for Woods.
“I genuinely believe that this new-build could act as a case study when competing with our better known European rivals; we’re quicker and we’re more economical – building British is definitely better”.
Ship repairer and marine engineering services provider SMS is based at Unit 1, Ocean Quay in Belvidere Road, Southampton.
Woods’ Silver Fleet is a family-based business which operates a fleet of luxury yachts and river cruisers for corporate and luxury events and entertainment on the Thames in London.
The new pontoons will be used to support its operations.