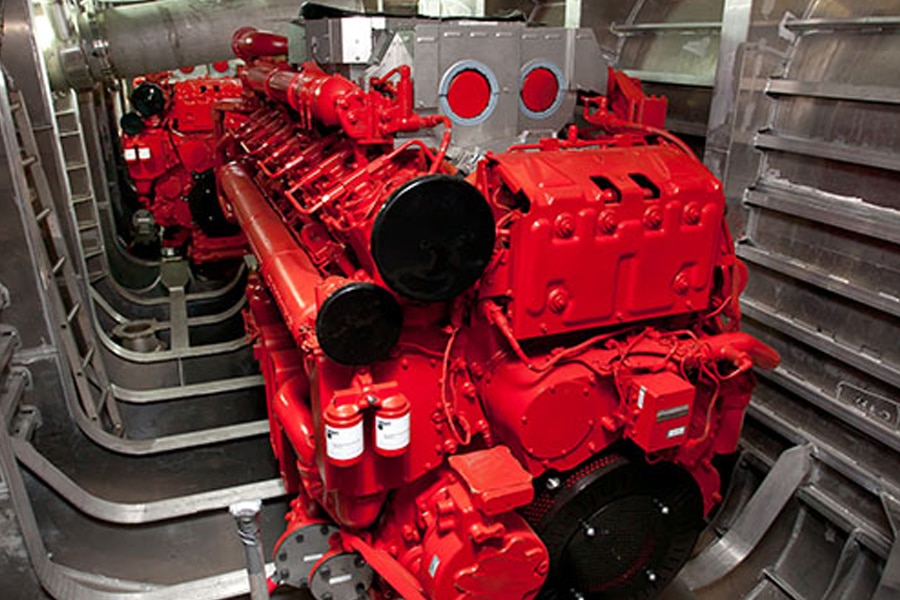 Cummins recently delivered the first four QSK95 engines for a marine application, with four additional units to be delivered in December. The engines were delivered to longtime Cummins partner SEACOR Marine Holdings for installation into a 57-meter catamaran crewboat designed by Incat Crowther.

“We are extremely excited to be working with SEACOR Marine to launch the first QSK95 marine engines,” said Jim Schacht, Executive Director – Marine Market, Cummins Inc. “We leveraged all the experience and best technologies Cummins has to offer to design the QSK95 marine engine, which will deliver increased power and reliability, fast transient response and simple serviceability.”

Two crewboats will be built, each powered by four QSK95 marine engines rated at 4000 hp (2983 kW) at 1700 rpm, matched to MGX-62500SC-H marine transmissions supplied by Twin Disc, Inc.® and quad HT-810 waterjets from Hamilton Jet,® to achieve a maximum speed of 40 knots. The two forward engines will run Jason® FiFi 1 class pumps off the front of the engine. Cummins is also providing auxiliary power; each vessel will have two QSM11-powered generator sets rated at 290 kWe, as well as a fully enclosed QSM11-powered deck generator rated at 270 kWe. Named Puma and Panther, the crewboats will be built at Astilleros Armon Burela, S.A. in Burela, Spain; the first boat is expected to enter into service in April 2017, followed by the second in July 2017.

“Our 20 plus year relationship with Cummins coupled with the latest in high-speed diesel engine technology were important factors in SEACOR’s decision to select Cummins to power our latest vessels, Puma and Panther,” said Robert Clemons, Vice President, SEACOR Marine Holdings Inc. “We are confident we can rely on the Cummins team and the QSK95 throughout the life of these engines, and we are excited by the increased value the launch of these vessels will bring to our customers.”

Compared to medium-speed engines offering similar power output, the QSK95 offers the benefits of smaller size, lower weight and better transient response while delivering a new level of serviceability. With IMO Tier II-certified ratings from 3200 hp to 4200 hp (2386-3132 kW), the QSK95 provides 95 liters of displacement in a 78-liter package. Nested cylinders and a 60-degree V enable a short, narrow engine block relative to other engines of comparable displacement. In addition, the QSK95 weighs in just over 13,000 kg (28,660 lb) — this is between 25 percent and 70 percent less than medium-speed platforms of similar power output.

As operators continue to seek better vessel maneuverability, the QSK95 delivers faster transient response through a unique turbo arrangement and a dry exhaust system. By using one turbo per four cylinders, the QSK95 is able to utilize a smaller turbocharger. The dry turbo housings and dry exhaust manifold maximize the available energy to the turbos, allowing them to spool up quickly, resulting in fast engine response.

Cummins design, validation and service teams devoted countless hours to ensuring that the QSK95 sets industry serviceability standards. From the early phases of engine design, qualified technicians participated in service tool and repair procedure validation, and design concepts were evaluated for progressive damage prevention. Initial feedback from technicians servicing QSK95 engines in the field has confirmed that the focus on serviceability will provide considerable payback over the life of the engines.