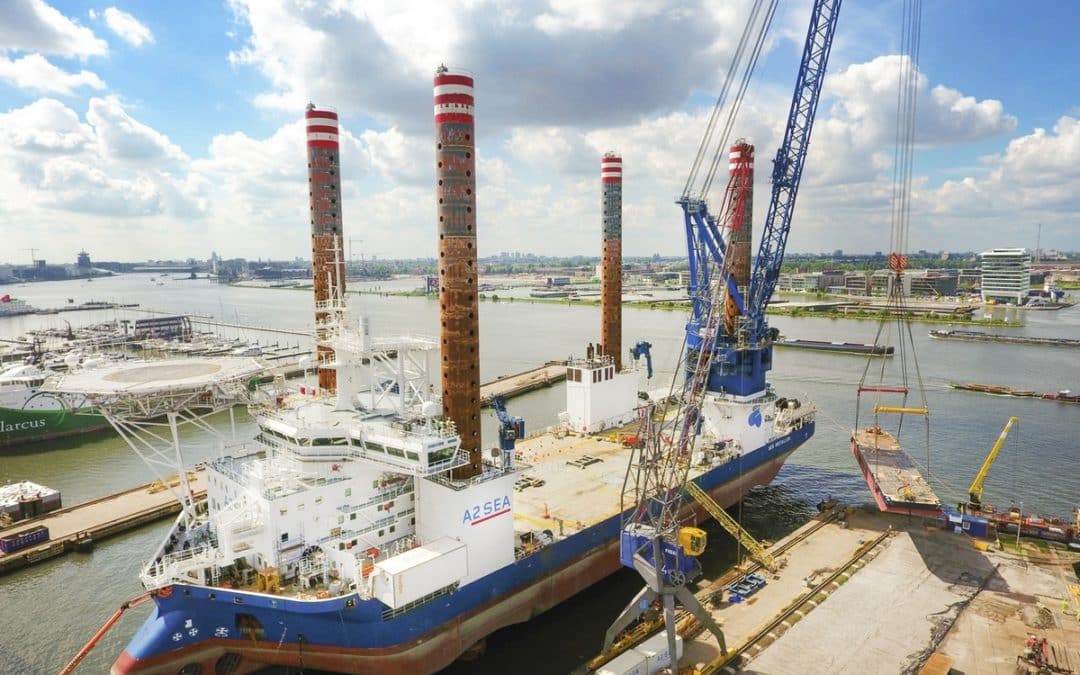 The principle scope of work involved the extension of the main crane boom, giving the A2SEA-owned offshore wind farm installation vessel increased reaching capacity: a pertinent point considering the trend of the increasing size of offshore wind turbine components. Other work comprised structural modifications as a consequence of the larger crane.

The crane boom was lengthened by inserting the new extension. The fact that all elements were composed of high tensile S690 steel had its consequences to the timing of the project. Damen Junior Project Manager Remco van Dam informs: “This material requires distinct and carefully planned procedures. You can cut it when it’s cold, but, before you weld it, you need to heat it with heating elements to 200°C to remove any traces of water.”

“Then, after slight cooling, the welding itself needs to take place at the correct temperature in a protected environment. For this, we constructed air-tight welding tents.”

Once complete, the weld in question was cooled prior to non-destructive testing after 48 hours. “We also performed our own initial checks after 24 hours in case any additional welds were needed. The main point with S690 is that you cannot rush things. If you go too fast, it can set you back 3 days.”

Two mobile Mammoet cranes lifted the extended crane boom back onto the vessel. To create a stable lifting foundation – allowing for a maximum of 0.3 degrees of tilt – the quayside was levelled prior to the vessel’s arrival at the yard. This required laying no less than 800 cubic metres of sand, topped off with 750 dragline crane mats.

The bigger crane also needed a bigger winch: DSAm replaced the existing winch with a larger, 900-tonne capacity, winch. This included all the necessary adjustments of the electrical, hydraulic and cooling systems. The vessel’s main mast also needed structural modifications.

With the 132-metre long vessel at the yard, DSAm also executed various standard maintenance jobs such as painting, pipe renewal and thruster inspection.

As is standard working practice at DSAm, safety issues were top of the agenda for yard personnel and the vessel’s crew, who remained on board throughout the modification works. Daily meetings commenced with discussion of safety issues and heavy lift events were given special attention in so-called ‘tool-box’ meetings.

The smooth running of the entire project was facilitated by the joint efforts of the DSAm and A2SEA personnel. “It has been a pleasure to work with the ship’s crew,” concludes Mr Van Dam. “There has been good communication throughout and this has helped us in many ways. For example, their involvement in adjusting the ship’s ballast tanks during such a heavy lift was crucial.”