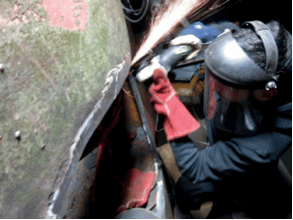 When the classification society told the owner of a 144m tanker that cracks in the welding seams of both rudder cover plates required immediate repair to prevent the pintle nut from corroding, an unscheduled visit to drydock seemed the only option. Hydrex Underwater Technology, however, had other ideas.

“As the tanker was on its way to Rotterdam we were contacted to find an on-site solution that would prevent an unscheduled and unwelcome trip to drydock,” explained Hydrex Production Executive Dave Bleyenberg. “The classification society had given the owner a very strict deadline, so we had to come up with a repair plan that could be carried out very quickly, indeed.”

During a detailed inspection of the damage, which included a dye check of the cracks, it was revealed that damage had impacted the cover plate welding seams to such an extent that replacing both plates in their entirety was the best option. Because the tanker’s cargo tanks were empty, the rudder could be trimmed enough to allow a repair above water, which expedited the repair considerably.

This allowed the diver technicians to remove and bevel the edges of the rudder plate to fit new inserts fabricated to perfectly fit the curve of the rudder.

“When the plates arrived, we were able to quickly install and secure them with a full penetration weld. Ultrasonic and magnetic particles tests were successfully carried out by an independent inspector, finalising the repair. Seven bolt-on anodes were also installed on each side of the rudder,” said Bleyenberg. “To make sure the vessel remained on-hire, our teams worked in shifts to complete the job in the shortest possible time.”

An expedient repair was also a key issue for the owner of a 190m containership that had lost its propeller cap. After a full assessment of the damage during the vessel’s stay in Algeciras, Spain, Hydrex proposed an underwater repair plan that would allow the ship to keep its schedule.

It transpired that propeller cap bolts were severed or severely damaged, which meant that a new propeller cap had to be installed. To allow the vessel to keep its schedule it was decided to perform the rest of the operation in Rotterdam during the ship’s next stop.

“At this point our technical department got the request to inspect the propellers of the ship’s two sister vessels and if needed to replace their propeller caps as well,” said Bleyenberg. “While the ship was on its way to Rotterdam we proposed some adaptations to the propeller cap securing technique to prevent the problem from reoccurring.”

When the ship arrived in port, the Hydrex diver/technicians installed the new propeller cap without any delay to the ship’s schedule. The repair was followed by inspections to sister ships, which revealed a similar problem. Following the same procedure, the remaining broken bolts were carefully removed and a new propeller cap was installed. The propeller cap bolts on the third ship in series only needed retorquing.

“Throughout all stages of these operations our technical department stayed in close communication with all parties involved. Our diver/technicians also worked in shifts to perform the operations in the shortest possible time. As a result of the underwater solution we offered, the owner had the propeller caps replaced while at the same time keeping his vessel on schedule,” Bleyenberg said.