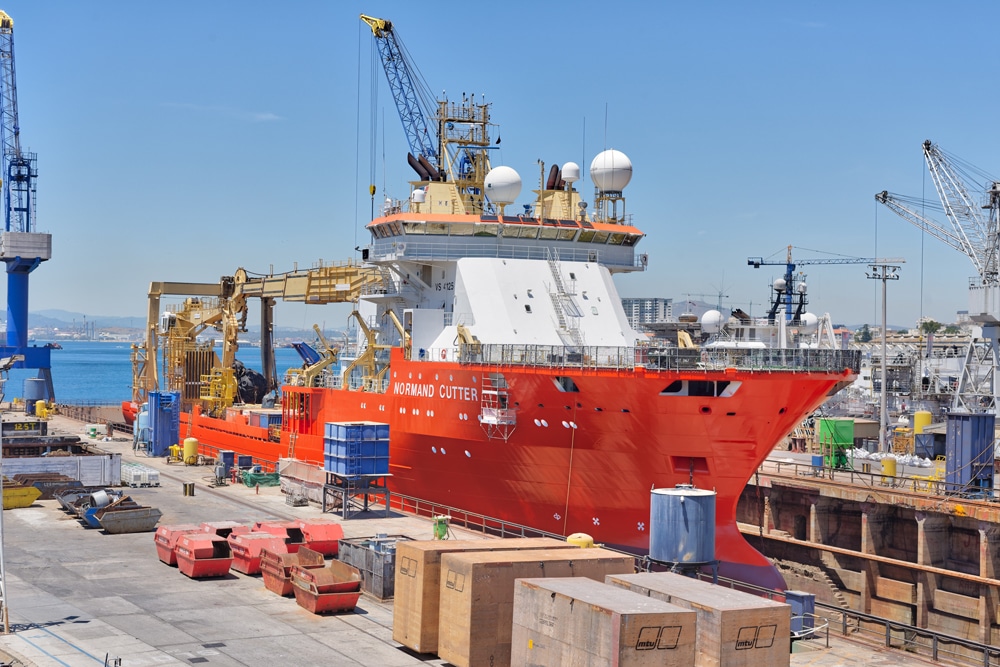 Norway-based Solstad has become a regular Gibdock customer, entrusting the yard with work on a number of high-tech offshore vessels over the past decade. The 2001-built Normand Cutter is in fact a repeat visitor to the yard, having previously docked at Gibdock in April 2011 for its last 5-year special survey.

Gibdock managing director, Richard Beards, says: “We are delighted that such a well-respected, quality operator as Solstad has decided to come back to us once again. Their continued support is much valued and appreciated and this project further demonstrates that we have become the ‘go to’ yard for offshore vessel work in the region.

The scope of work commissioned by Solstad for Normand Cutter included maintenance and repairs to key components of its propulsion system. Its five Brunvoll thrusters were removed and transported to the yard’s workshops, where they were stripped down and overhauled before being returned to the ship and reinstalled. Similarly, the vessel’s two tailshafts and CPP propeller hubs were withdrawn and overhauled, as were the two rudders. The rudder tiller flaps were removed, machined and refurbished as part of this process. In addition, the two gearboxes, port and starboard, were also overhauled.

Gibdock also carried out a range of standard drydocking and survey items, including painting, valve repairs and refurbishment, minor steel repairs and pipework. Jonathan Pocock, Gibdock’s ship manager for Normand Cutter, says: “It was a challenge to carry out this project within the 21-day drydock time allocated, particularly given the amount of work required to overhaul the propulsion system, but we completed the task to the owner’s satisfaction.”

Once out of drydock, Normand Cutter remained at the yard for intensive crane testing, up to a SWL of 330 tonnes. This was carried out by Waterweights, of Holland, in partnership with Gibdock. “We have the contacts needed for such specialised testing work inside the yard, even when we don’t have that specific capability ourselves,” says Pocock. “We do whatever it takes to allow the owner to get all the work done in one location, to keep downtime to a minimum.”

The Normand Cutter drydocking has further cemented the close ties between the Norwegian owner and Gibdock. Conrad Melhus, technical manager, says, “We chose Gibdock for this project because of the good relationship we have with them, their reliability, and the fact they have good ‘hands on’ management with short reporting lines. They are also a centrally positioned yard with easy access by road freight from the main spare parts hubs in Europe.”

Gibdock has secured a number of offshore vessel projects this year, despite the challenging market conditions in the offshore sector. At the time of Normand Cutter’s departure, three more offshore vessels were in the yard.

Richard Beards adds: “By focussing on QHSE (Quality, Health, Safety and the Environment) issues, which are a top priority for offshore vessel operators, and reliable on time delivery, we have been able to take full advantage of our favourable geographic location to serve this market, as companies mobilise and demobilise assets. Increasingly offshore operators in the Mediterranean and West Africa view Gibraltar not just as a shipyard, but as an offshore base to support their activities in this part of the world. On that basis we are optimistic about securing further offshore work in the second half of 2016.”