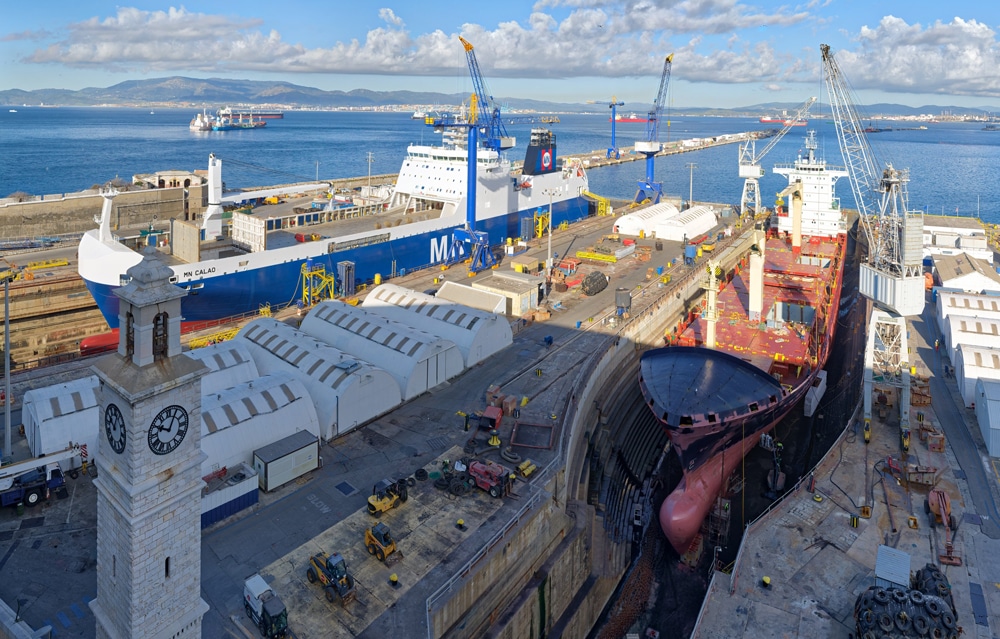 Gibdock has once more vindicated its reputation for delivering maintenance and repair services on time and to the highest stands in the ro-ro and container ship markets. The Gibraltar yard has completed two projects in recent weeks that demanded ships re-entry into service without delay.

Returning customer Compagnie Maritime Nantaise (CMN) chose Gibdock’s facilities to carry an extensive package of work on its ro-ro container vessel, MN Calao, which spent 18 days in the yard last month, taking in its five-year classification survey. The 12,026 dwt, 160m long vessel, which was originally delivered by Hyundai Mipo Dockyard in 2013, is a sister to the same owner’s MN Tangara, which was docked at Gibdock in June and July 2017.

For MN Calao, Gibdock was tasked with carrying out an extensive and complex paint job, covering the underwater hull and the superstructure, including the funnel and mast areas, to return the vessel to ‘as new’ condition. In addition, its two MAN B&W 7-cylinder main engines were overhauled, and the boilers cleaned, as part of a major maintenance programme that included work to the ballast water treatment plant.

During the vessel’s stay in the yard a thorough inspection of the rudder blades and steering gear was carried out and the tailshaft removed to enable new stern tube seals to be installed. The propeller itself was also refurbished and new blades were fitted. The yard also inspected all lifesaving appliances, renewing them as required.

“Close co-operation between the client and ourselves ensured this project went smoothly and was completed on time, to a high quality and to the owner’s satisfaction,” said Filip Tsankov, ship repair manager. “This was a big project that covered almost every area of the ship and its key machinery items, and as a result required careful planning to ensure there were no conflicts between the different elements of the work scope as they were being carried out simultaneously.”

Another recent visitor has been the 148m, 1,080 TEU capacity container vessel Ops Hamburg, which spent around 20 days in the yard before leaving in early March. Part of the work on the vessel, which is managed by first time Gibdock customer Uniteam Marine, was carried out alongside and the remainder in dock. The biggest single job involved the removal of the ship’s MAN B&W 7L 58/64 main engine for overhaul in the workshop.

Gibdock also carried out hull surface treatment, blasting and coating work and withdrew the vessel’s tailshaft, liner and rudder for inspection, which revealed the need for an unexpected amount of additional work. The tailshaft assembly was subsequently removed and transported to the yard’s workshops, where modifications were carried out in way of the propeller blades and to the surface of the propeller hub.

“Despite the significant amount of additional work required to the ship’s tailshaft and propeller, we rose to the occasion and mobilised staff to get this part of the job completed within the allotted time frame,” says Juan Pinero, ship repair manager. “Thanks to good teamwork, the ship was still redelivered on schedule to Uniteam Marine. We hope that based on their positive experience with Ops Hamburg, we will see them back here again soon.”