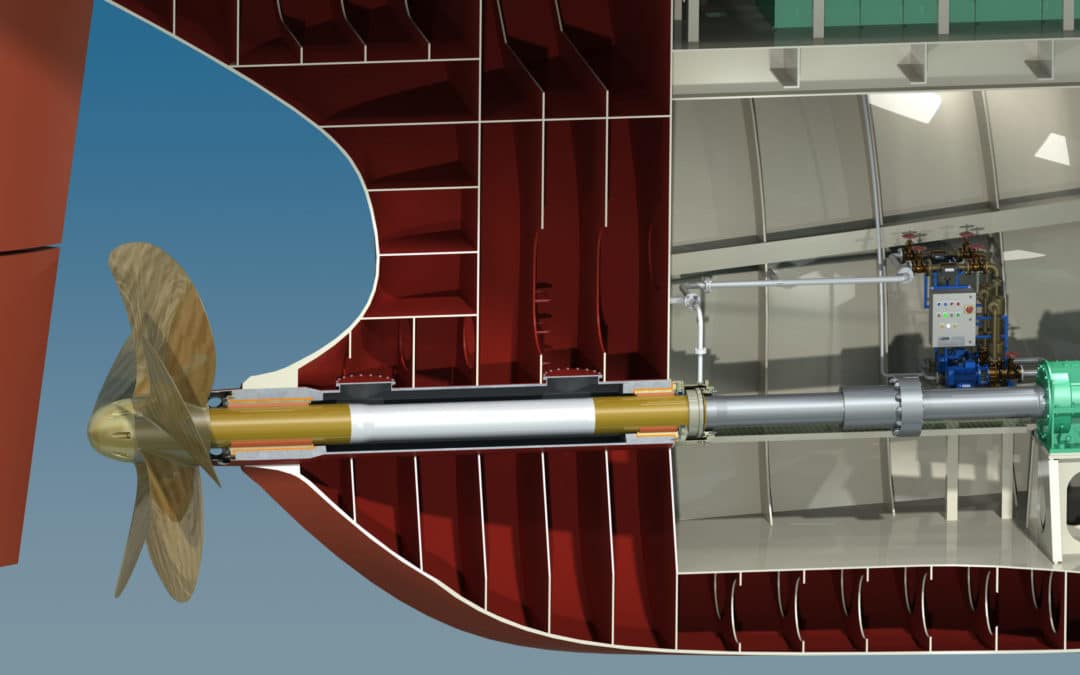 Leaking stern tube seals are a regular source of business for underwater seal repair companies, however they represent an unwelcome headache for ship owners. The problem has afflicted most ship owners at one time or another, often with expensive denial of port entry and unscheduled drydocking. Costs of $250k and up to 8 days off hire are typical in the case of emergency docking.

No matter how well built and maintained, the design of oil-lubricated seals is inherently prone to some degree of leakage. It has been considered “normal operational consumption”, and some classification society type approvals have listed oil discharge rates of between 6 to 12 litres/day. 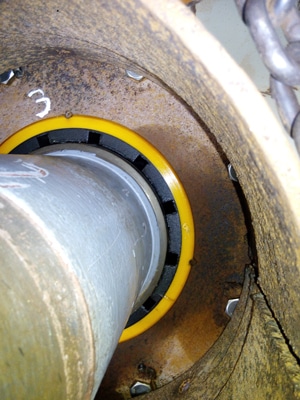 Although they are now the standard, oil-lubricated propeller shaft seals only appeared in 1948. Before that, ships operated with wooden bearings lubricated by seawater, with lignum vitae wood used to support the propeller shaft. The wood – dense and hard-wearing with natural lubrication – is possibly best-known as the material for the traditional English policeman’s truncheon. In fact it is still used for bearings in niche sectors, and there are even some signs of a come-back for use in wind turbines. For general use, however, wood fell out of favour after the development of oils lubricated seals.

Stuffing boxes around the wood bearings acted as the seal to prevent seawater from entering the engine room, but these tended to score the bronze shaft liner and created more repair work.

The wooden bearings lacked reliable wear life limits much beyond five years, so propeller shafts had to be withdrawn and the bearings replaced – an expensive task for the owner.

The weakness of the system however has always been the effectiveness of the seals, which must leak oil in operation for cooling, resulting in pollution. Seawater leakage in the other direction, into the stern tube, causes oil emulsion and often catastrophic bearing failure.

Although oil seals were adopted by most commercial vessels, seawater lubricated bearings continued to be used by most Navies for safety reasons and for their non-catastrophic failure mode: if a naval ship took a torpedo hit and the shaft seals were damaged, all the oil would leak out and the shaft would seize. With seawater lubricated bearings, they still have propulsion capability.

New designs for seawater lubricated seals using polymers instead of wood, however, are now winning back customers. George Morrison, Thordon Bearings’ Regional Manager for West Europe, Africa and ANZ, says the popularity is growing quickly: “We manufacture our bearings in Canada but we now we also have a full facility in Poland. Navies have always used seawater seals, but there are advantages in the cruise and commercial sectors. In the ’40s everyone used them, and it was only after the war that commercial vessels switched to oil seals for the sake of better reliability than lignum vitae systems.

“Navies never made the switch – they continued using wood, then asbestos laminates or rubber, and since the ’60s bearings made from polymer materials. However it is only recently, in the last three or four years or so, that classification societies have been more active in accepting new generation seawater-lubricated propeller shaft bearing systems. Before then class rules had been somewhat left behind.”

Thordon Bearings gained its early experience with work for Navies and Coast Guards, starting with an order for its COMPAC seawater-lubricated propulsion system for 12 Canadian Navy frigates in the late 1980s. Environmental credentials and operational cost savings are now expanding the market back into commercial sectors. 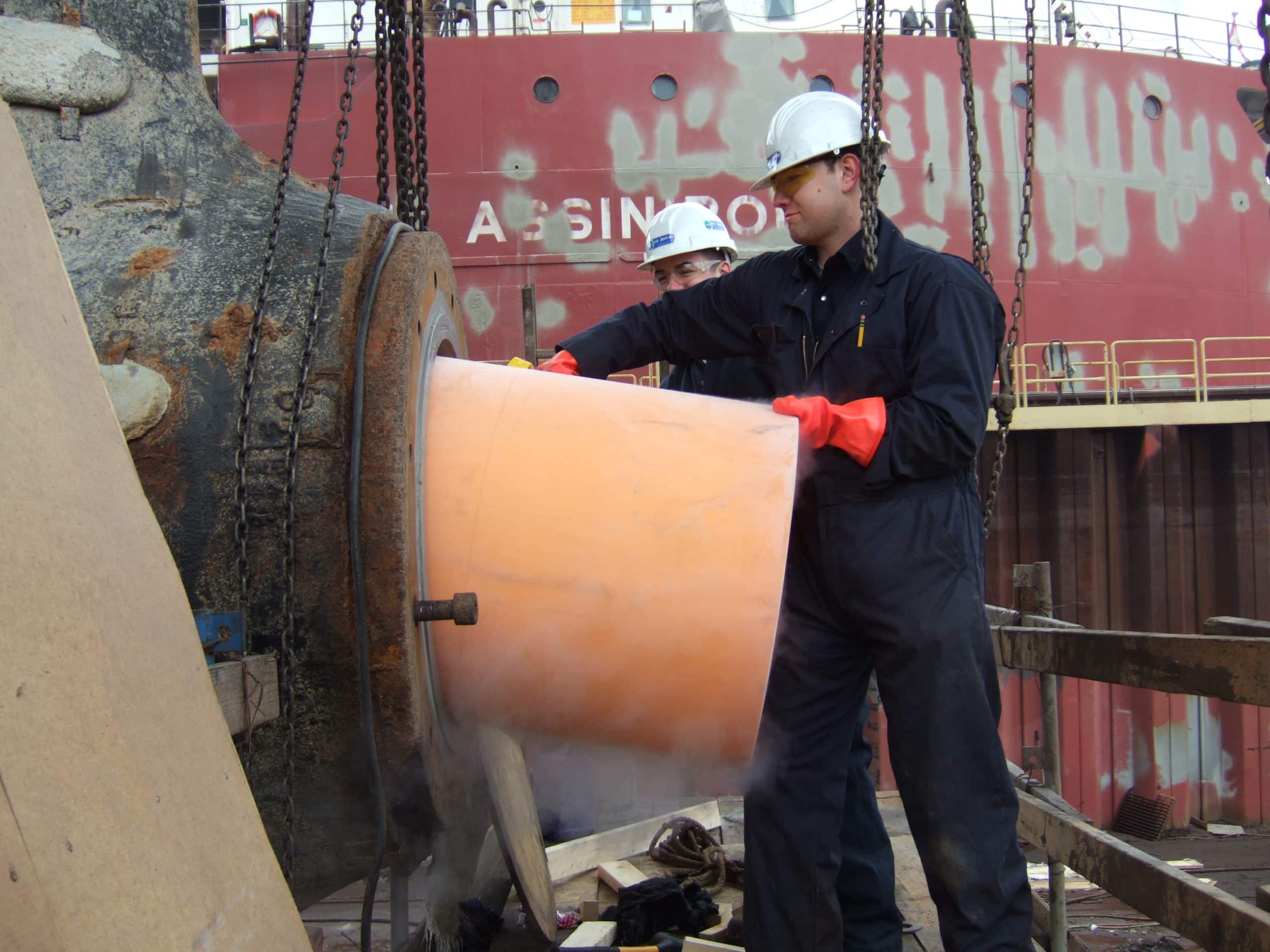 Cruiseships tended to specify seawater lubricated systems to eliminate the risk of any accidental oil discharges in the environmentally sensitive areas they operate in. The more recent trend, though, is towards podded propulsion systems, and this has spurred the development of new bearing materials and shaft coatings.

George Morrison continues: “We are still competing for business in the cruise sector but we are also moving into the merchant sector, and environmentally sensitive areas such as the Arctic and the Antarctic.

“If you map emergency seal repairs they are mostly around the US and Europe where environmental regulations are tightly policed – there is much less pressure to repair leaks in areas such as Africa.

“Most of our production is for new builds, but increasingly we have been involved in doing retrofits. The main pressure is often one of time, as it is relatively complex operation and would not fit in 4 to 5 day scheduled drydocking.

“We have just completed one of several oil-to-water retrofits to ships operating in the Canadian Great Lakes. Ships in those waters tend to last longer as it is a fresh water environment, and they also have long winter lay-up periods when they cannot sail, leaving more time for maintenance. There is also extreme environmental pressure on ships trading in those areas.

“Several factors tend to sway the ship owner in deciding to adopt our system. We often find they have experienced an expensive seal failure or have been refused docking into the U.S. There is also push towards more environmentally acceptable lubricants (EAL), which cost a lot more.

“Payback time is estimated at four to five years, taking into account capital and operational expenses over that period.” 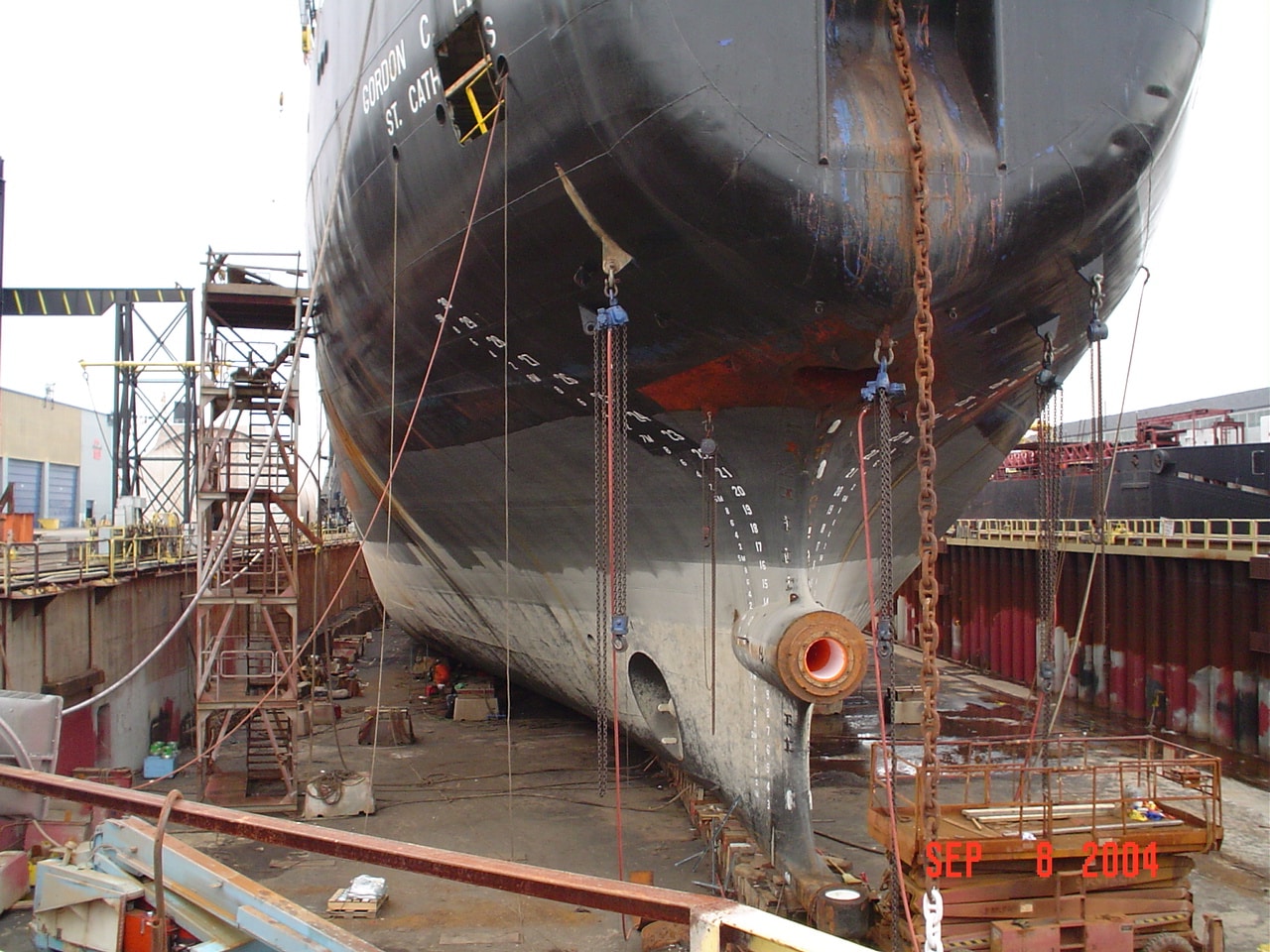 Retrofit operations for propeller shaft bearings are usually complex. George Morrison says: “Normally we would do full shaftline review and we would want to be involved as early as possible. We liaise with Class, see the drawings, attend the installation, and preferably, we would also oversee the shaft alignment.

“We expect very long service life for our systems. With good alignment and lubrication there is no reason they should not last forever. We have cruise ships in their 20th year of operating our COMPAC system.

“Realistically, if we are involved in the installation and can take full responsibility all the way through, we will offer a 15 year guarantee on a new build, and there is no reason not to offer same for a retrofit”.