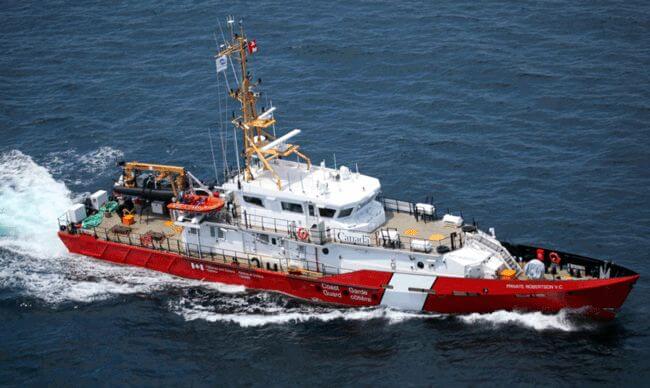 The Government of Canada is committed to providing the Canadian Coast Guard with the equipment it needs to carry out its important work, while providing economic opportunities for the Canadian marine sector. The purchase of three medium commercial icebreakers ensures the continuity of service for Coast Guard clients and the safe passage of marine traffic through Canada’s waterways.
Canada, on behalf of the Canadian Coast Guard, awarded a $610-million contract to Chantier Davie, of Lévis, Quebec for the acquisition of three icebreakers and work to prepare the first ship for service.
The first of the three medium icebreakers refitted by Chantier Davie for the Canadian Coast Guard was named CCGS Captain Molly Kool and delivered in December 2018, the second CCGS Jean Goodwill will be delivered in the spring of 2020 and the third, CCGS Vincent Massey during the summer of 2020.
Balder and Tor
Whilst the final works were being carried out on CCGS Captain Molly Kool (ex Vidar Viking), work was already underway to pull the rudder and tailshaft on the Balder Viking (CCGS Jean Goodwill).
The focus has been heavily on the engineering and planning associated with the conversion of the two ships. Balder will be the first to be delivered, therefore work is focusing on engines, thrusters, gearboxes etc, to ensure all is in order before the conversion work, whilst focus on Balder Tor (CCGS Vincent Massey) is to execute removal work ready for conversion.
CCG have also advised that the Captain Molly Kool is planning to return to Davie for an interim period to allow more engine overhaul work to be completed before she returns for her conversion later.
Several major tasks have already been carried out on board the two Viking ships. In particular, the production team dismantled the heliport and refurbished the engines. In addition, a significant amount of electrical equipment has been removed from several areas, as well as the bow wash system on both vessels. As for the Tor, some steel was removed.
The two vessels have also undergone inspection by DNV and CCG in order to assess the condition of the various systems on board.
This work was followed up with the protection of the exhaust system outputs, removal of level winder, the removal of two crash rail cranes, and the removal of two Hydramarine cranes.
The dismantling phase came to an end earlier this year on both the CCGS Jean Goodwill and the CCGS Vincent Massey. An important step in the refurbishment of the propulsion control systems (CPP) on both vessels was also recently completed.
The rear propeller shaft was replaced, the propellers (x3) on both vessels were refurbished, the seals were changed to Simplex seals, and couplings were also upgraded to SKF couplings recertified to Polar Class 4 (PC4).
Despite the high level of complexity of the work, the production teams adapted day after day, showing dynamism and rising to the challenge, without lost-time incidents.
The bow (Jean Goodwill) is now ready to receive the first steel plates which will increase the ship’s ice capacity to PC4.
Additional work
In addition to the conversion of the three icebreakers, Chantier Davie is currently carrying out the repair and upgrade of the FA Gauthier ferry for the Société des Traversiers Québec (STQ). The FA Gauthie is engineered to run on LNG fuel and designed to maintain vital, year-round services across the lower reaches of the ice-prone St Lawrence River. They are also carrying out the repair and upgrade of the CCGS Louis St Laurent polar icebreaker for the Canadian Coast Guard, and have just won contracts to maintain and upgrade the Royal Canadian Navy’s frigates. The first ship is scheduled to arrive in the summer of 2020. They have also won a contract to build two ferries for the government of Canada, and design work is underway.
The yard is also currently awaiting the results from tender to build six polar icebreakers for the Canadian Coast Guard.