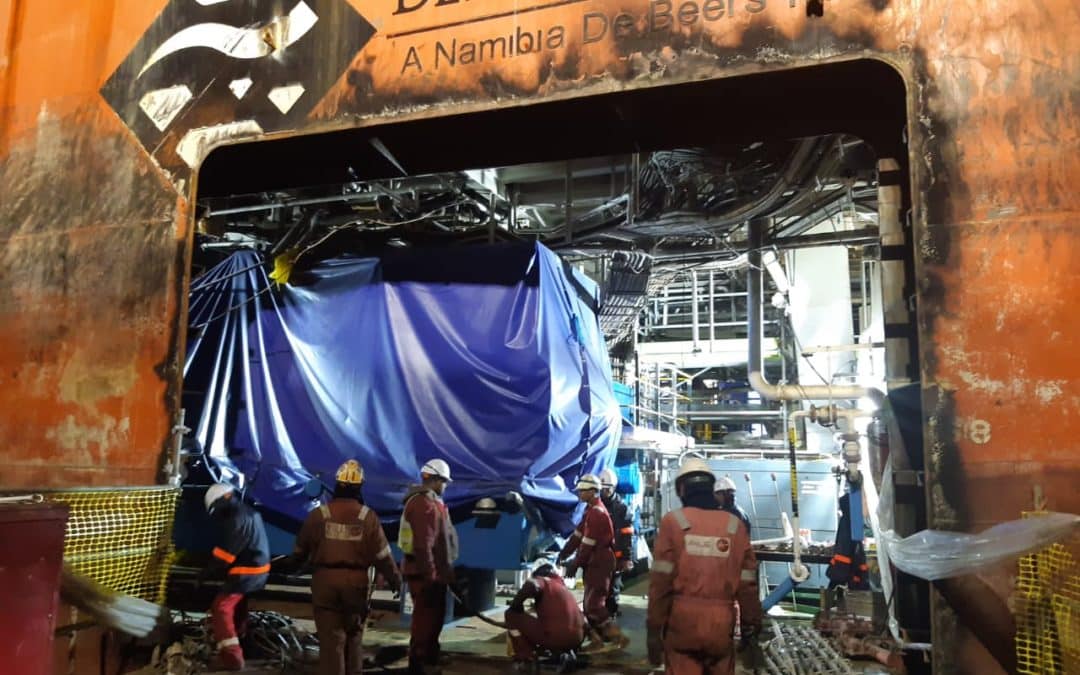 Since 2002, diamond mining operations in Namibia have taken place in larger volume offshore than onshore, as gemstones washed into the Atlantic Ocean over millions of years are dredged and processed. It’s an expanding market, generating over a hundred million carats annually, so it’s important that mining vessel availability remains high.

So, when as part of routine maintenance operations the Debmar Pacific mining vessel required removal and replacement of two engines, De Beers turned to ALE to ensure a swift and efficient job. As time in port at Cape Town was limited to just a few weeks, several other similar procedures were taking place at the same time, meaning this work had to take place under strict space limitations.

Prior to the lift operation ALE installed two custom-designed gantries on either side of the vessel, parallel with the floor of its engine rooms. These gantries were enlarged at the client’s request, in order to provide better access to the engines.

One by one, each engine was then jacked-up to a height of approximately 1m, using four 60t jacks. A medium skid track measuring 25m was then laid, from a position underneath the engine to the custom-designed gantry at the vessel’s exterior.

Each 38t GE engine was then skidded the length of this track, where it was uplifted using a 400t crawler crane and set down in a nearby storage area. This procedure was completed in reverse in order to install both 80t Wartsilla engines.

ALE needed to liaise with several onsite authorities and contractors during the project, in particular during the construction of both access gantries. Having executed a large number of vessel upgrade procedures in the past, ALE was well-placed to advise on the lift procedure that would deliver the best value whilst upholding the highest standards of safety.

The Debmar Pacific was built in 1977 and converted into a mining vessel during 1997. It will return to active service mining gemstones 24 hours a day, 365 days per year, once all maintenance operations on it are completed.