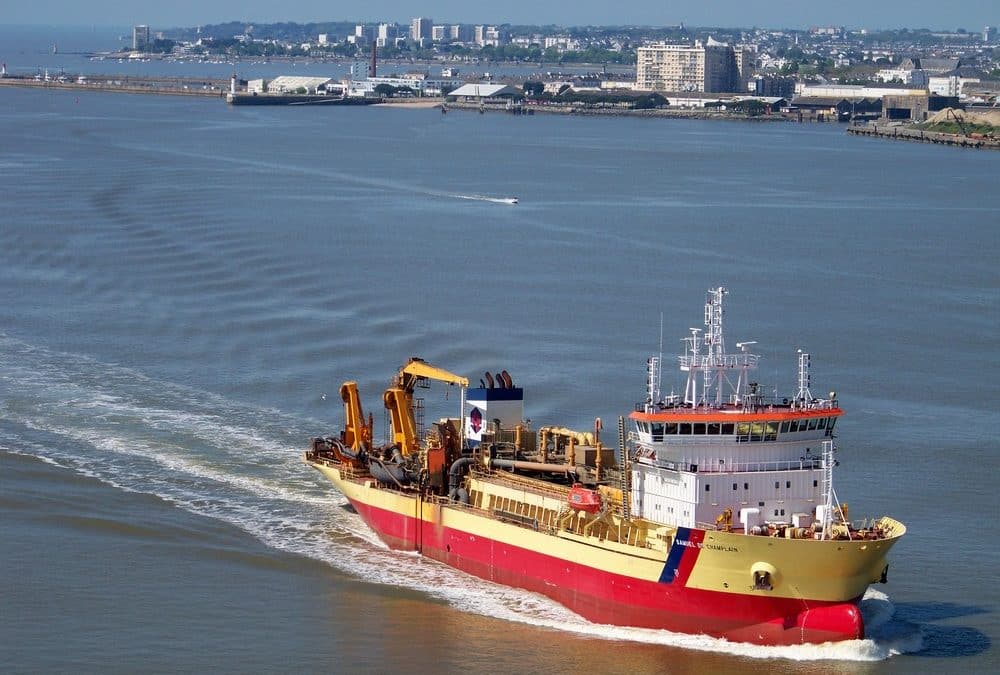 Damen Shiprepair & Conversion has been awarded a contract to undertake the conversion of a dredger to dual-fuel capability combining LNG and MGO. This will be the first conversion of its kind to take place in Europe. The contract was awarded by Rouen-based GIE Dragages-Ports with regard to its 117m, 8500m³ trailing suction hopper dredger Samuel de Champlain, and the works will take place next year at Damen Shiprepair Dunkerque. The conversion is part of an EU-supported initiative to promote LNG propulsion in short-sea vessels operating along the European Atlantic coast.

Under the contract, Damen is delivering a turnkey package that includes engineering, procurement and support. The current propulsion system of the Samuel de Champlain is diesel-electric burning MGO, and so the package includes the change of generators to dual-fuel models and the installation of onboard LNG storage facilities. The vessel was built in 2002 and is the largest vessel in the GIE Dragages-Ports fleet. Based in the Grand Maritime Port of Nantes-Saint-Nazaire, she divides her time between the Loire and Seine estuaries.

GIE Dragages-Ports is an economic interest group that owns, maintains and charters out a fleet of seven dredgers to six key ports serving the French Atlantic coast plus Marseille in the Mediterranean. It is 50% owned by the seven ports and 50% by the French State. Each port charters the dredgers from GIE Dragages-Ports according to its needs and is responsible for operating them and supplying its own crew.

The conversion project is being made possible by a subsidy from the European Commission’s Innovation and Networks Executive Agency (INEA) via its Connecting Europe Facility programme. To achieve the funding, GIE Dragages-Ports formed a 12-member Franco-Spanish consortium named the ‘S/F SamueLNG for a Blue Atlantic Arch’ project with the aim of promoting the use of LNG by small-scale vessels active on the Atlantic coasts of Spain and France and up into the English Channel / La Manche. The conversion of the Samuel de Champlain will demonstrate the feasibility of using LNG as a fuel on smaller vessels, and allow GIE Dragages-Ports to fulfil its mission of optimising costs via lower fuel bills and less engine maintenance, while at the same time delivering greatly reduced emissions of CO2.

“The consortium allows us to share experience with our partners and to access the support from INEA, without which this project would not have been possible,” said Jean-Pierre Guellec, CEO of GIE Dragages-Ports. “We hope that this conversion will demonstrate to other short-sea vessels the benefits of conversion to LNG and mark the first stage of the development of an LNG bunkering network on the Atlantic coast of mainland Europe.”

“At Damen Shiprepair & Conversion we believe in the fast growth of LNG as a marine fuel,” added Alexandre Richerd, Sales Manager at Damen Shiprepair & Conversion. “We are committed to sharing our expertise with our clients and supporting those who are considering retrofitting their fleet to dual fuel. This contract proves the ability of the Damen Group to offer its customers turnkey solutions for complex LNG conversions integrating engineering and procurement.”

Currently a series of studies are underway, and equipment is being ordered. The conversion itself is scheduled for the autumn of 2018.