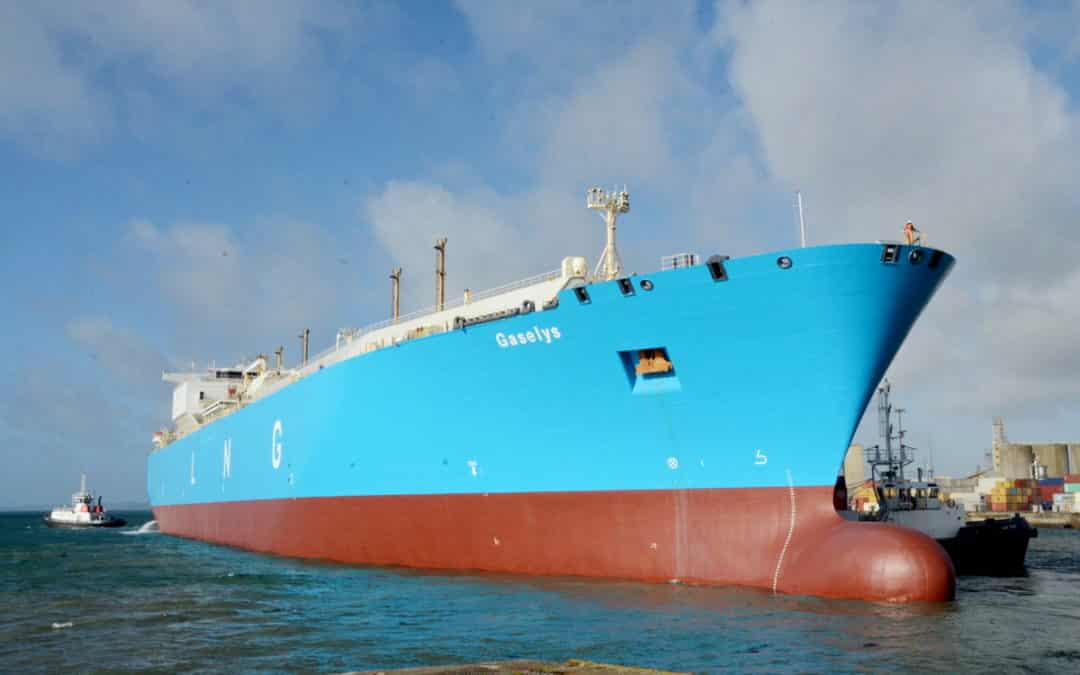 Damen Shiprepair Brest has completed a renewal survey maintenance programme on the 290-metre LNG carrier Gaselys. Co-owned by NYK Line of Japan and ENGIE (formerly GDF SUEZ), operated by Gazocean and chartered by ENGIE, the ten-year old vessel came into DSBr for a regular periodical docking that included a full schedule of works. When she was launched in 2007 the Gaselys was, along with her sister ship the Provalys, the largest LNG carrier ever built. Today they are still among the largest in operation anywhere in the world.

Damen Shiprepair Brest is one of the most experienced European yards in the repair and maintenance of LNG carriers. It also has some of the largest dry docks in the region, measuring up to 420 metres by 80 metres. The Gaselys arrived in February and was placed in dry dock number 2.

The maintenance programme included, among other tasks, servicing the cargo pumps, overboard valves, thrusters, mooring winches and the cargo cranes. Two of the main compensators were also replaced, the fans overhauled, and assistance given to the specialist subcontractors responsible for maintaining the LD HD compressors. New insulation was fitted to areas of piping. Additional works included removing mud from the ballast tanks, and blasting and repainting the hull and superstructure.

Diego Groenendijk, Commercial Manager at DSBr, commented, “The docking was completed on time and on budget thanks to excellent cooperation between all the parties involved. Extensive preparations at the yard before the Gaselys arrived also ensured that works got underway immediately and continued without interruption.”

DSBr has had the pleasure of working on other LNG carriers of the ENGIE fleet in recent years. These include the Provalys mentioned above, the GDF SUEZ Global Energy and the Tellier.

Nicolas Barnaud, president of NYK Armateur, stated: “The choice of a ship repair yard for a scheduled technical stop is always the result of a tender, in which are taken into account the competitiveness and clarity of the commercial offer, as well as the previous track record of the Owner with the repair yard and its facility. Damen was selected on these grounds. The high commitment of the Damen teams, combined with that of all the crew members, the Gazocean vessel manager and the procurement team, confirmed that this choice was the good option”.