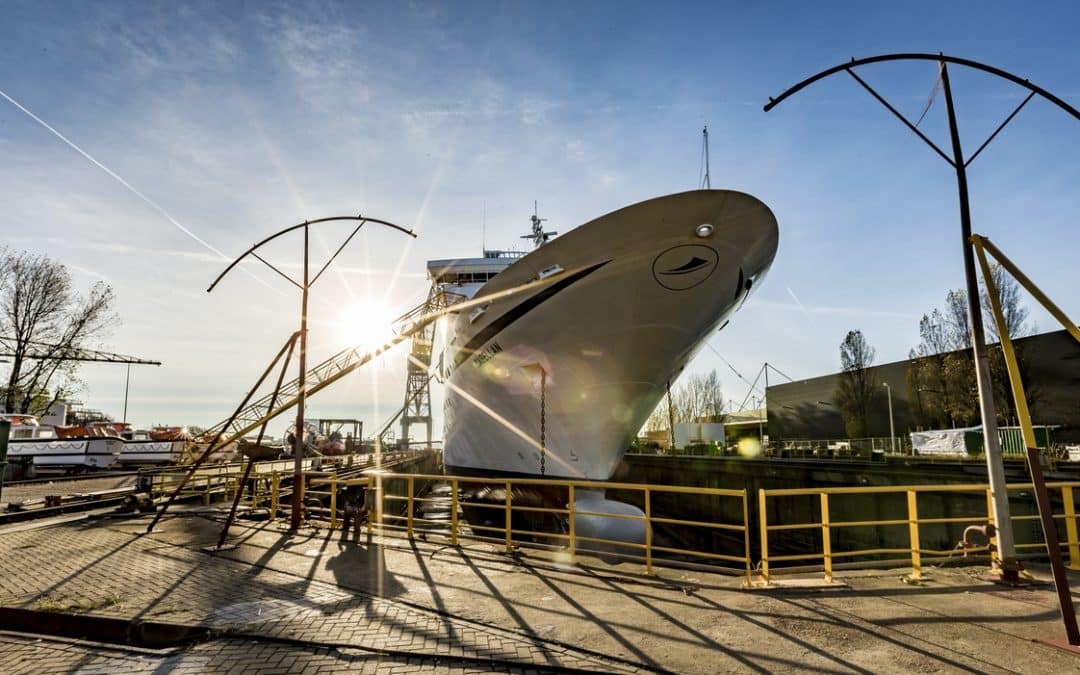 Damen Shiprepair Amsterdam has completed maintenance works on cruise vessels Marco Polo and Magellan. Both vessels are operated by British based Cruise & Maritime Voyages (CMV), part of the Global Maritime Group. The works represent the on-going business relationship between Damen and CMV.

During the initial docking process at the yard, Marco Polo was inspected by DSAm Project Manager Wouter van den Bossche. “After examining the vessel, we scheduled various equipment overhauls and repainting,” he says. “Our first task was to completely high-pressure clean the hull and then paint the flat bottom and vertical sides in the renowned ‘Marco Polo’ blue. The topside of the vessel was painted at a later stage, which became the critical path for undocking.”

Damen’s work on the 1965-built vessel continued in maintenance, renewal and upgrade works in her public areas and cabins, the air conditioning and evaporator rooms as well as renewal of numerous sea water and fresh water piping and overhauling of the overboard valves. Work on the ship’s rudder – taking rudder clearances and repacking of rudderstock – was also performed.

For Magellan, the maintenance work also marked a return to Damen Shiprepair & Conversion. “She was here last year for a scheduled maintenance stopover,” notes DSAm Project Manager Daniel Gerner. “And, because we often see her sailing to the Amsterdam Cruise terminal, she has become a well-known friend.”

After her initial inspection, the 1985-built vessel presented a substantial work schedule for the Damen team. “A significant part of the docking involved the tail shaft. For example, the starboard propeller hub needed inspection in the workshop. So a special lifting tool was made for removing the hub. Then, after Rolls Royce’s survey, we machined the existing hub, blade carriers and W-plates as per inspector’s instructions.”

Another major part of the project was installation of a new sewage tank system. This required cropping and removing the existing tanks. This was followed by construction and fitting of new foundations for the new sewage treatment units and strainers. Mr Gerner continues: “The new sewage treatment units were transported in sections from the workshop to the vessel, where they were fitted onto the new foundations and connected later on.”

In addition to maintenance, renewal and upgrade works in her public areas and cabins, repairs of various steel damages and the overhauling of numerous ship’s systems was also necessary. “This included overhauling the main engine blower, tender embarkation cylinders, heaters, evaporator and purifier. And also one of the scupper pipes, which was renewed by Niron Staal’s (based on the same location as DSAm) pipefitters department.”

Winter cruise schedule
With her next cruise voyage departing from London on 6 December, Magellan had a tighter schedule than her older sister. “This project was performed within the time scale – utilising short communication lines and a team who was on top of it all the time. We were proud to see Magellan sail away on the 5th of December,” concludes Mr Gerner.