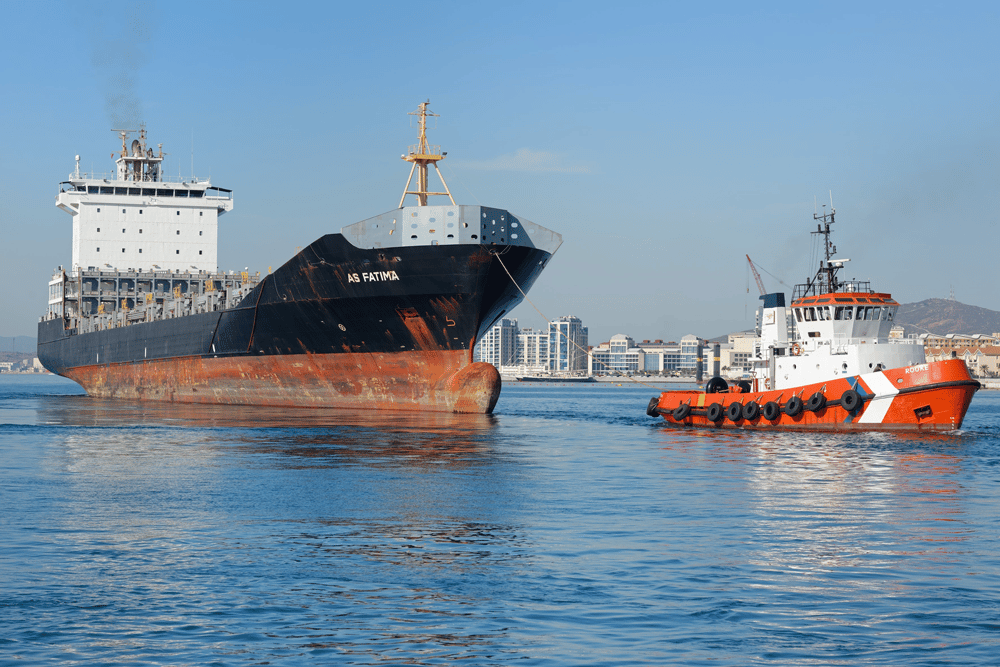 Gibdock’s success in attracting German shipowners to its facilities for shiprepair work continues to grow, with three German containerships docking at the Gibraltar yard within a six-week period during the last quarter of 2017. The Peter Döhle-owned, 2,785 teu Rita, Ahrenkiel Steamship’s 1,300 teu AS Fatima and the 3,091 teu Louis S, owned by Schepers Rudolf Reederei, all spent time in drydock in the fourth quarter for varying maintenance and repair programmes.

The 206m long Rita was docked for 14 days in October, for a drydocking schedule that included a total of 11,000m2 of hull treatment, with blasting over an area of 5000m2 ; repairs to the sea chests, tailshaft and liferaft cradles; and the removal of the vessel’s propellers and bow thrusters for overhauling in Gibdock’s well-equipped workshops.

Ship repair manager for the project, Philip Tsankov, says such extensive hull treatment work alongside other repairs needed careful planning. “The owner required a lot of work in a fairly short time scale and this was a challenge; we knew from the start there was no scope for delay. We planned the work around the hull treatment and the vessel was redelivered as agreed on time.”

The 166m long AS Fatima arrived in Gibraltar in late October and was primarily docked for work to address a stern tube issue. This required the yard to dismantle and remove the tailshaft and transport it to the workshop, where the propeller blades and blade carriers, as well as the propeller hub itself, were completely overhauled. During the AS Fatima’s 21 day stay at the yard Gibdock also conducted a complete overhaul of the vessel’s main engines.

Schepers’ 220m long Louis S was drydocked in the yard’s dock No 1 for around a week. The container vessel also came in with a stern tube issue, requiring the propeller unit to be dismantled. Ship manager, Juan Pinero, says, “Gibdock needed to manufacture the specific tooling required for the dismantling work so the repairs could be undertaken.” Inside the workshop the Gibdock team worked on the propeller and overhauled the seals, and then re-fitted components before reinstallation onboard. The yard also washed and painted the vessel’s underwater hull.

The visit of the three German owned containerships has been part of an encouraging general upturn in activity at the Gibraltar yard in recent weeks. John Taylor, operations director, says, “Business has been picking up and container vessel owners and operators have been attracted to the yard by our location, close to key trade lanes, as well as by our reputation for quality work and on-time delivery. Our regular ferry refit season starts soon, and we are getting more enquiries from the offshore market, so the first quarter of 2018 is already looking promising.”

Gibdock can accommodate most vessel types trading in the Mediterranean and Atlantic regions. Facilities include three drydocks, with lengths of 154m x 29m, 184m x 29m and 272 x 38m. These are equipped with a total of 10 dock cranes with lift capacities up to 45 tonnes. The yard can also utilise its 300m long Main Wharf quay and the 435m long South Mole for alongside repairs. Its purpose-built fabrication area, Pad 1, is also in demand for retrofit scrubber installations, ballast water treatment retrofits and vessel modifications.