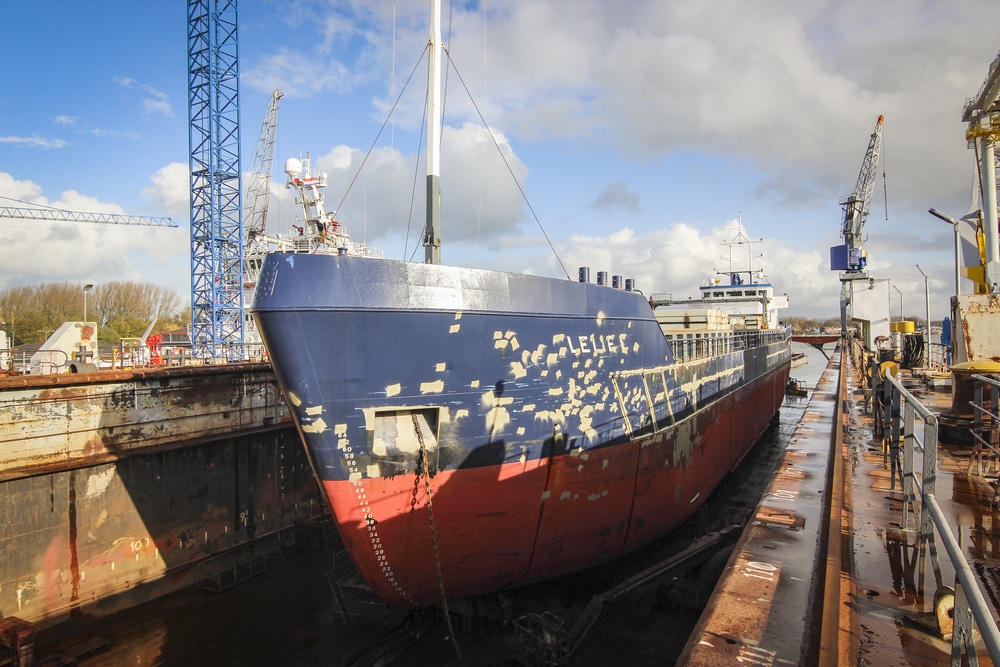 Two years after its previous visit the Lelie C, owned by Cebo Marine, has left Damen Shiprepair Oranjewerf (Oranjewerf) following a full maintenance programme and a significant upgrade to its cement carrying capacity. The three-week stopover included a full survey and a range of repairs and maintenance to prepare her for more years of reliable service.

These works included fitting a new fuel filter system, renewing the hydraulic pipes for the hatch crane, and repairing the propeller while at the same time replacing the seals and liner for its shaft and changing the shaft seals for the bow thruster. The hull and topsides also received a fresh coat of paint.

The main project, however, was the installation of eight new cement silos, each with a capacity of 40m³. These tanks were previously fitted on the VOS Symphony, another regular visitor to Oranjewerf, prior to it going for scrap. Damen Shiprepair Oranjewerf removed the tanks, refurbished them and then installed them on board the Lelie C. Prior to their installation, Oranjewerf fabricated a silo foundation and fitted it in the vessel’s hold. 80-metres of stiffeners were also welded into place in the double bottom tanks to provide the necessary support.

Meanwhile, approximately 100m² of grating walkway was fabricated and fitted on the deck to give access to the manifolds on each of the new silos. The supply / discharge and air pipe system for the two existing silos was also refurbished to accommodate the new capacity.

“This was a big project,” commented Jeen van der Werf, Commercial Manager at Damen Shiprepair Oranjewerf. “Two years ago we installed the original tanks from the Ritske, a vessel belonging to the same client, and now we have repeated the process again, this time on a much larger scale. The Lelie C began her life as a general cargo vessel, but now her transformation into a cement carrier is complete.

“Cebo Marine is a local and regular customer, continued Jeen van der Werf, “and the excellent levels of cooperation between all involved ensured a smooth project. The only element we could not control was the wet Dutch weather, but the provision of some additional dry boiler suits ensured that our flexible and motivated yard team kept the works on schedule.”