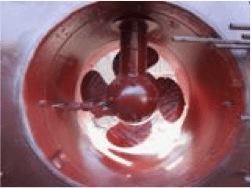 Subsea Industries report that use of their Ecoshield hard coating to rudders and thrusters is paying dividends, with a number of shipowners noticing zero cavitation damage and failure compared to equipment coated with other protective systems.

According to Miltos Synefias, Technical Director, Pleiades Shipping Agents, who first applied the coating in 2013 to the rudder of the crude oil tanker Evrotas, “the results made the choice to extend the coating to other vessels obvious”. Since then, Subsea Industries has completed Ecoshield applications to the rudders and thruster nozzles of a further nine Pleiades vessels. Some of these vessels have already drydocked but their rudders and nozzles experienced zero cavitation damage and did not need to be recoated.

Similarly, five years after Ecoshield was applied to the rudders of three containerships operated by a major liner company, the coating was still intact needing only touch-ups. The performance resulted in the shipowner going on to apply the coating to rudders of 40 more vessels.

When Maersk Deva drydocked at the Santirul Naval Constanta shipyard, in Constanta, Romania, Georgios Zolatos, Fleet Technical Coordinator, Danaos Shipping, said: “Highly qualified professionals with FROSIO red level certificates evaluated the coating and gave the green light for application. After five years of operation at various speeds there were minor detachments and those were easily repaired.”

“Hydrodynamic cavitation causes damage to rudders and thrusters often resulting in serious erosion, pitting and sometimes complete failure of equipment. However, just one Ecoshield application to equipment affected by the phenomenon prevents cavitation and corrosion damage throughout the vessel’s operational life,” said Subsea Industries’ Production Executive and NACE Coating Inspector Manuel Hof. “The confidence we have in our hard coating technologies is backed up with a ten-year performance guarantee.”

The performance of Subsea Industries hard coating technology has also been independently verified by DCNS Group, the France-based defence research establishment. In cavitation tests, the coating passed all six stages of its stringent testing regime. A seventh stage was added with an Ecoshield test plate placed in a cavitation tunnel for a further 40 minutes. DCNS ended up endurance testing the coating through 16 stages but just couldn’t damage the coating.

“We now have more than 400 ship references for Ecoshield on rudders but we are also seeing a marked increase in application to thruster tunnels and gearboxes,” said Hof. “More and more owners are specifying the coating because they know the savings it will bring them.”

Recently shipyards in China, Romania, Turkey, the USA, the UK and France have applied the Ecoshield coating to rudders and thrusters of a number of vessels, including several containerships, vehicle carriers, passenger vessels and an oceanographic research vessel.