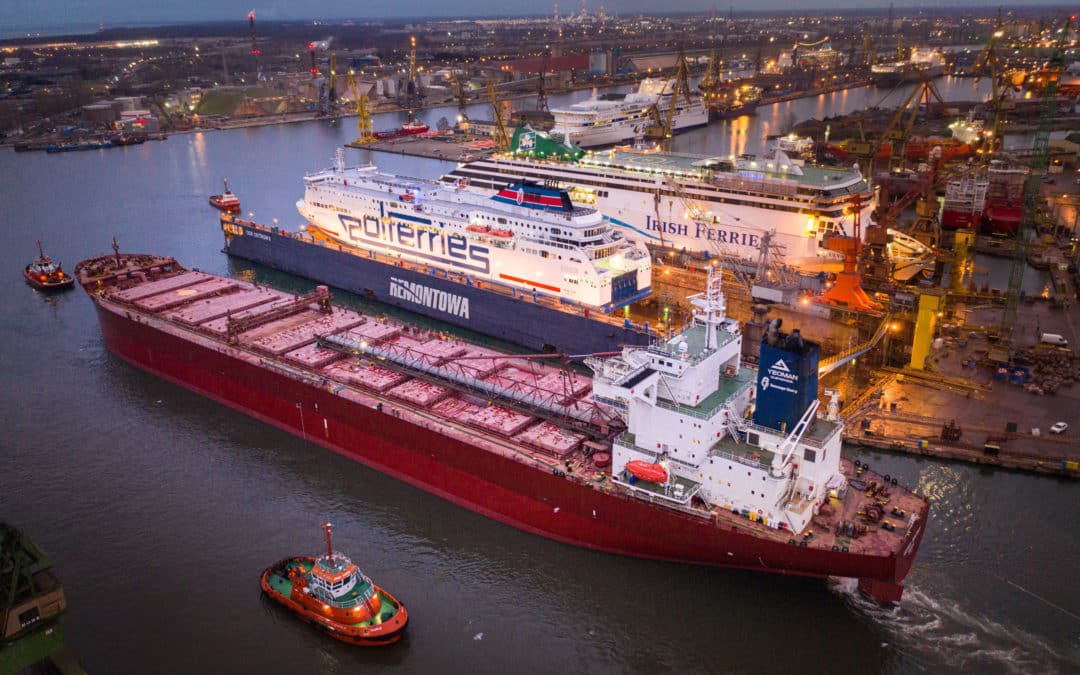 There was plenty of activity in the Baltic before the coronavirus, with Remontowa repairing 25 ships in the first month of the year. BLRT Grupp has completed the modernisation of the largest floating dock in the region, and Damen Oskarshamnsvarvet is undertaking a major life extension programme on the survey and research vessel Ocean Surveyor.
In the first month of 2020, Remontowa has seen more than 25 ships repaired in the shipyard’s docks and at the quays. There were six car-passenger ferries: Huckelberry Finn and Marco Polo (ex Barbara Krahulik) – later joined by Tom Sawyer (TT-Line), Mecklenburg-Vorpommern from Stena Line, Baltivia from Polferries, Pont Aven owned by Brittany Ferries and Princess Anastasia from Moby.
One of the main tasks on the Huckleberry Finn ferry was replacing 161 tons of steel on several decks. This job was completed in 20 days. The ship also underwent maintenance and painting of decks, garages, superstructure, stern ramp, funnel and tanks.
The ferry, Barbara Krahulik underwent a partial conversion associated with the change of ownership. During her stay in Remontowa the ferry was also renamed Marco Polo. An additional 220 ton accommodation block was installed on the mid-ship, in which 52 new cabins were built. A similar block, weighing 30 tons, was installed on the bow, where the passenger lounge was located.
In addition, a new bow thruster was installed, and the ferry was equipped with two scrubbers. A dozen or so kilometres of new cable installations and several kilometres of pipelines were also laid, including GRE pipes, and deck maintenance was carried out.
Tom Sawyer has undergone hub overhaul, replacement of seals on the shaft line and machining of hub components. The hull of the ferry was also painted while the vessel was in dock.
A wide scope of steel and maintenance work was carried out on the Mecklenburg-Vorpommern (Stena Line) ferry, including the decks, railway, superstructure and hull. The docking of the ferry made it possible to carry out works on the underwater part of the hull, including: overhaul of the rudder, polishing of the propellers, replacement of seals, repair of the propeller blades, maintenance of the hydraulic cylinders of the stern ramp and the lowered ramp between decks, as well as the inspection of mooring rollers and coolers. Pipeline sections were replaced.
The Brittany Ferries’ Pont Aven ferry went through a major overhaul at the yard, involving the replacement of one of the four main engines and the repair and modification of the other three ones. In total, the yard dismantled and subsequently assembled 430 tonnes of different components on the ferry’s main propulsion system.
The Ulysses (Irish Ferries), arrived in the first half of January. She was retrofitted with four scrubbers – one for each of the four main engines. A Wartsila hybrid system was also installed, which enables the exhaust gases from sulphur oxides to be cleaned in both open-loop and close-loop cycles. The EGSC system also includes a SMO steel tank, previously made in the shipyard. Over 35 kilometres of electric cables were laid. During the dock work, one tunnel thruster was replaced and the other was repaired. The entire underwater part of the ferry was also maintained, and in some areas of the ship indicated by the shipowner, the paint coating was renewed. 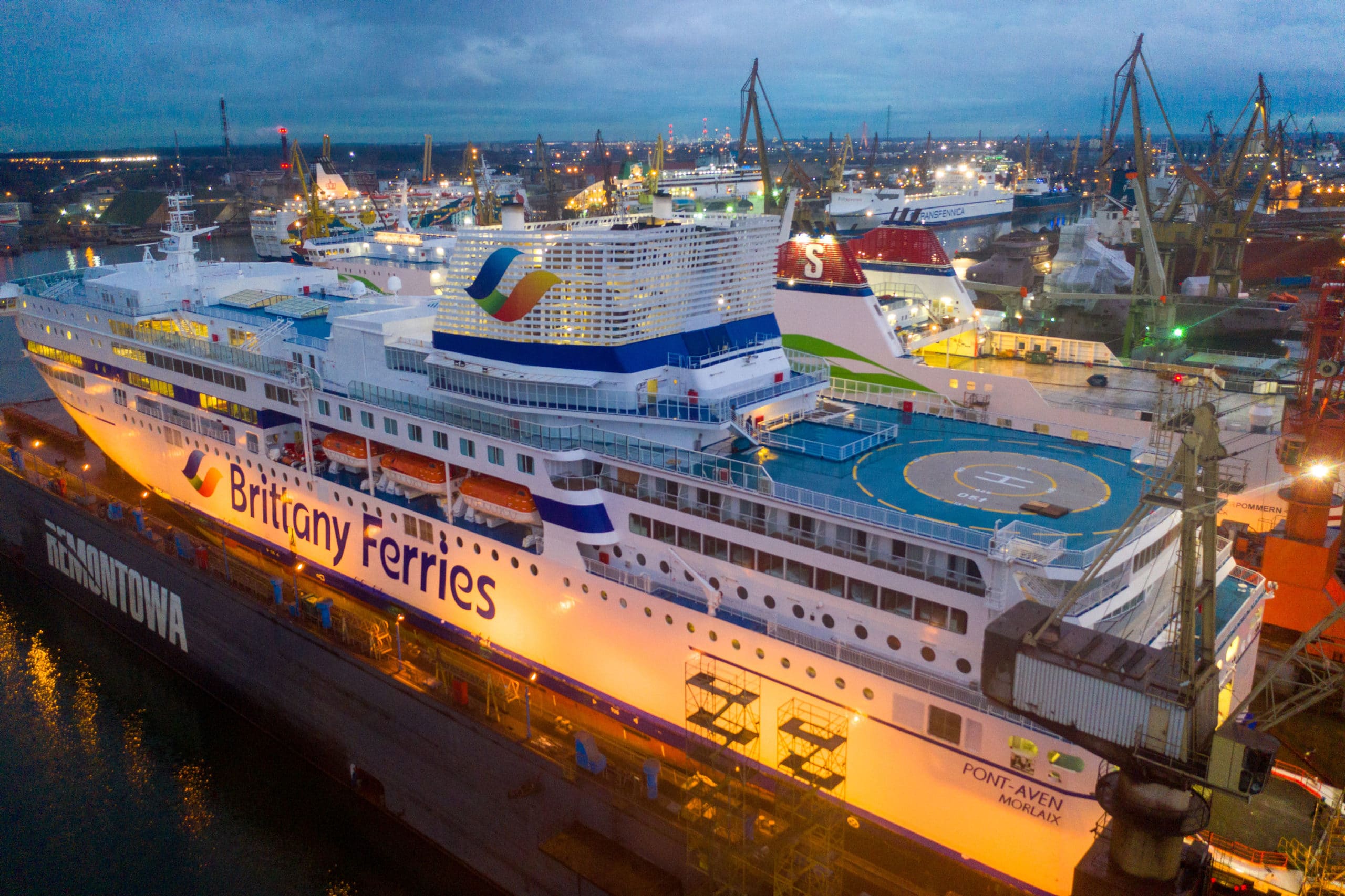 February visitors
In February, Grande Gabon, the first of the five container/Ro-Ro carriers of the Grande Marocco series (Grimaldi Group) entered the shipyard to undergo repairs. All the ships will be retrofitted with exhaust gas cleaning systems (scrubbers).
A BWT system was installed on the DFDS Regina Seaways. In addition, a large scope of work was carried out in the underwater part, including the replacement of the right-hand rudder stock liner, replacement of seals on the shaft line and on the propeller blades, inspection and maintenance of the tunnel thrusters, maintenance of the open deck, and replacement of steel in the fuel tank.
Trans Chemica, a chemical tanker belonging to SeaTrans, entered the dock on 25 February, directly from the sea. The largest scope of work was for hull maintenance and replacement of 10 tons of steel in hard-to-reach areas (engine room, fuel tank bulkheads and working deck), as well as the replacement of four tons of steel and maintenance in the chain lockers. In addition, fire line pipes and several hydraulic systems were replaced on the main deck of the ship.
The Yeoman Bontrup’s self-discharging bulk carrier has undergone a Special Survey, which was extended with a large range of steel work, involving the replacement of around 20 tonnes of steel. Part of the ballast system pipes and exhaust valves in the scrubber system were also replaced, and the exhaust pipe was renewed. While the ship was in the dock, the outboard valves were inspected, along with the shaft lines, and maintenance and painting works were also carried out. In addition, the main engine pneumatics were also inspected and regulated.
The Saimaagracht general cargo ship, owned by Spliethoff’s Bevrachtingskantoor BV, underwent a Special Survey. In addition to the typical class renewal work, the most important task was to repair some cracks in the fuel tank. The scrubber was also repaired using a SMO steel cap, and maintenance and painting work was carried out while the ship was in dock.

Dock modernisation
BLRT Grupp has completed the modernisation of the largest floating dock in the region. The floating dock, for servicing Post-Panamax, Panamax and Aframax vessels, was delivered to Klaipeda on the 20th of September, after it upgrading at the shipyard in Naantali.
The dock is awaiting commissioning at the Western Baltija Shipbuilding shipyard, which is scheduled for this summer. The infrastructure expansion project at Klaipeda port should be completed by then.
BLRT Grupp acquired the dock from the Adriatic Shipyard Bijela in Montenegro in 2016, and will be installed at the Western Shipyard in Klaipeda. The 235m long and 45m wide dock is the largest in the Baltic countries, and opens up new opportunities for repairs and modernisation projects of Post-Panamax, Panamax and Aframax vessels.
BLRT Grupp is one of the largest industrial groups in the Baltic Sea region. It includes three shipyards; Tallinn Shipyard in Estonia, Western Shiprepair in Lithuania and Turku Repair Yard in Finland. 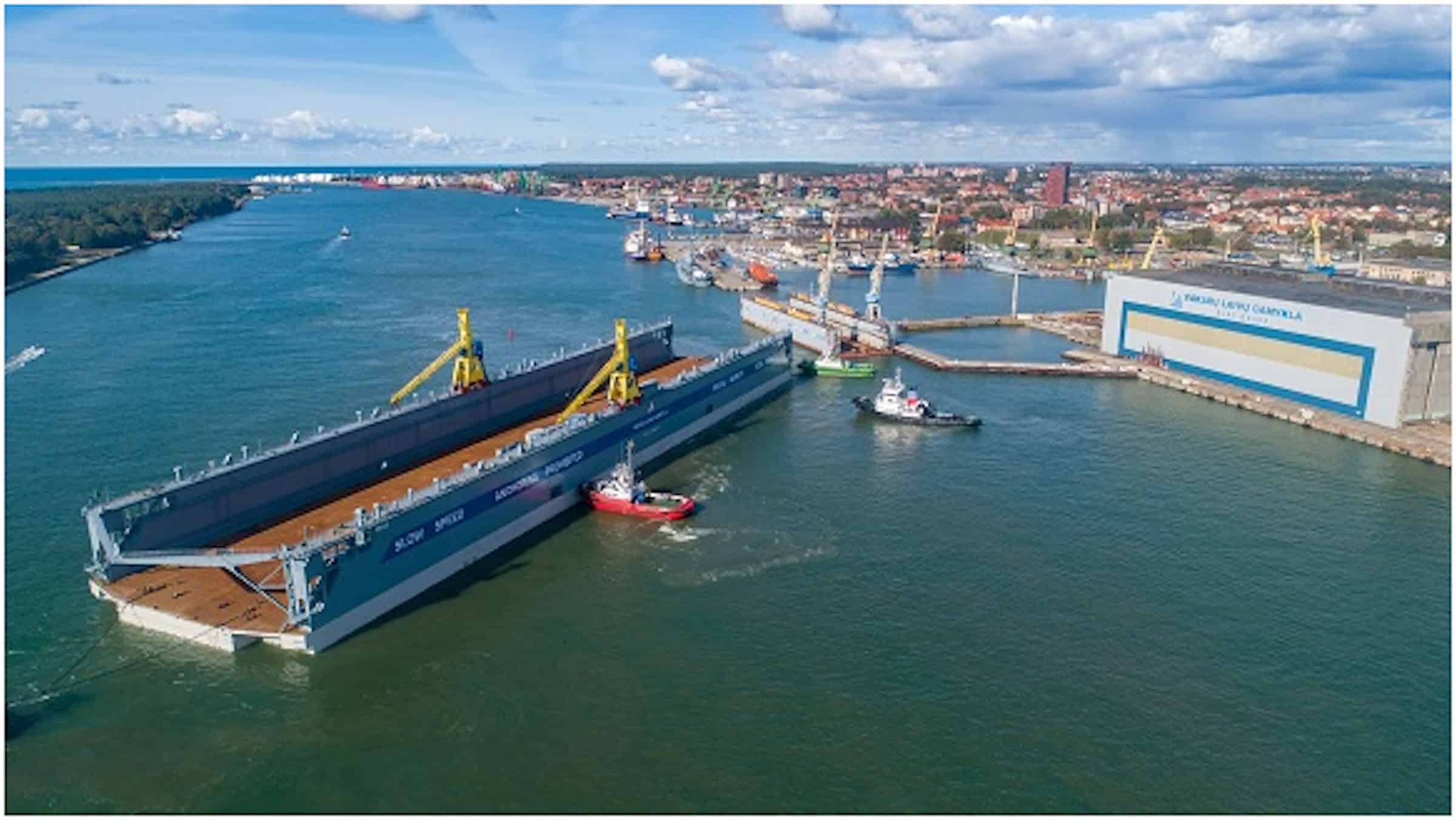 Damen Oskarshamnsvarvet in Sweden has won the public tender for a contract to undertake a major life extension programme on the survey and research vessel Ocean Surveyor, owned by SGU, Sweden’s national geological survey agency.
The vessel will undergo the life-time extension over the course of 12 months. It will include the replacement of the all the machinery, bridge and auxiliary systems including HVAC and a complete overhaul of all remaining equipment. A key aspect of the project will be the conversion of the propulsion and electrical systems from diesel to diesel electric. The overall objective of the year-long programme will be to deliver a modern, low-impact vessel with a good working environment for both the crew and the scientists working on board and better overall accessibility.
“We are happy to let Damen Oskarshamnsvarvet perform the extensive conversion of the vessel, and are confident that she will be ready for another 25 years of marine surveying prior to the field season 2021. Ocean Surveyor is a key platform for many marine surveys conducted in Sweden, not only for SGU, but also for other operators hiring the vessel’s unique surveying facilities,” said Björn Bergman, operations manager at SGU.
Built 1984 in Norway, the Ocean Surveyor is a twin hull, multi-purpose, survey and ROV support vessel constructed using Kevlar/FRP composite for operations mainly in coastal waters. At 38m long and 12m across she has accommodation for 15 personnel across 12 cabins and is equipped with a DPS, as well as various fixed hydroacoustic measuring systems. The main deck is fitted with winches, cranes, an aft frame and a moon pool for deploying samplers and underwater cameras. There are two laboratories on board; a wet lab for sediment and environmental sample analysis, and a space with a gamma spectrometer and sediment X-ray for the detailed study of samples.
“We are delighted to have won this contract,” said Flip van der Waal, Managing Director at Damen Oskarshamnsvarvet Sweden. “The tender process was rigorous, requiring a lot of research and pre-engineering, and now that we have been awarded the project we are responsible for the entire design scope and the procurement as laid down by the SGU. In many ways it’s not so different from a newbuild. We are very confident that our capabilities and facilities are perfectly suited to this project – including our main hall where we will carry out the work. This covered environment is the ideal location to conduct work on a composite vessel such as this. We look forward to getting started.”
The contract was signed on Friday 28 February. Work will begin on the vessel on 6 April 2020 and is scheduled for completion by 31 March 2021. 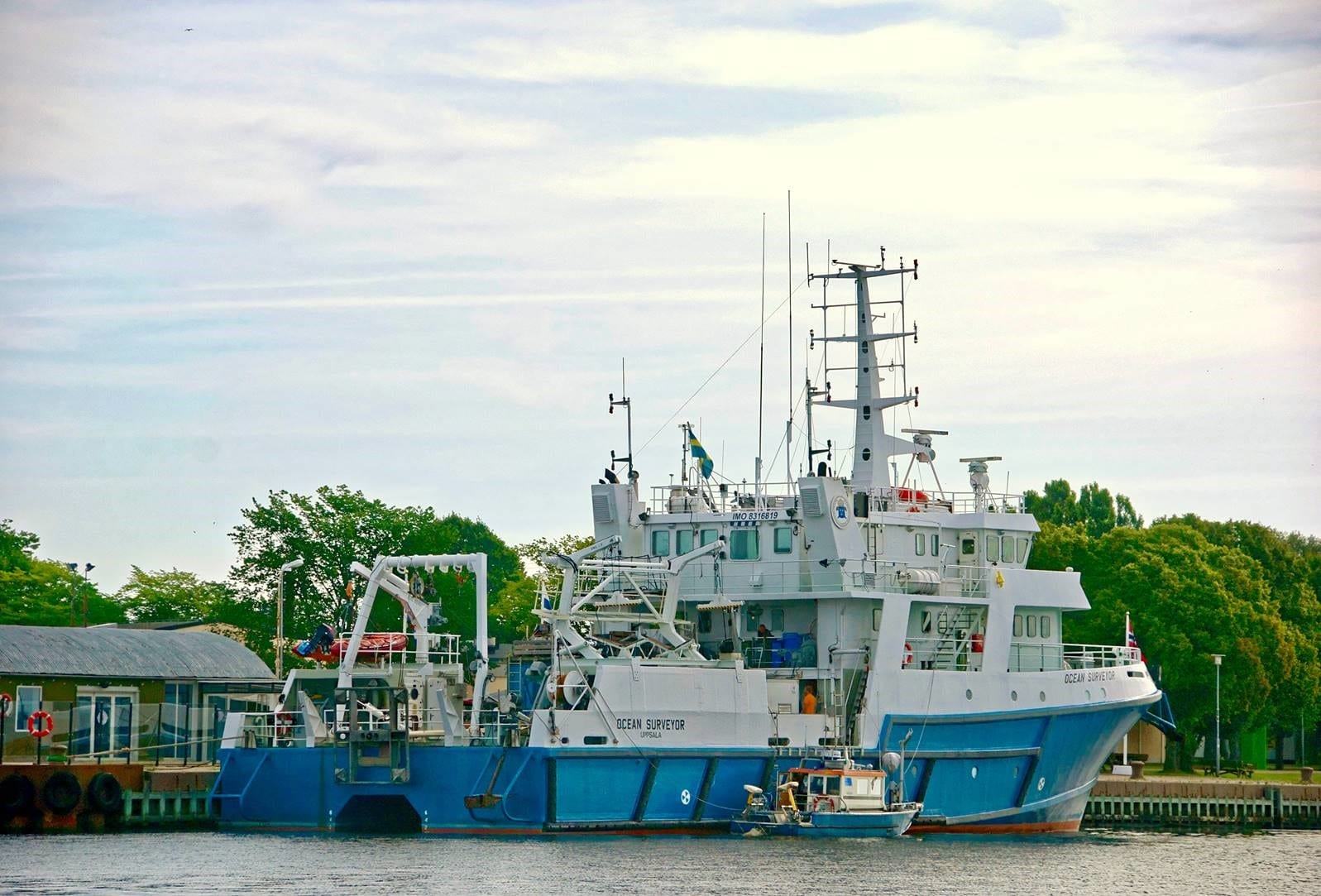