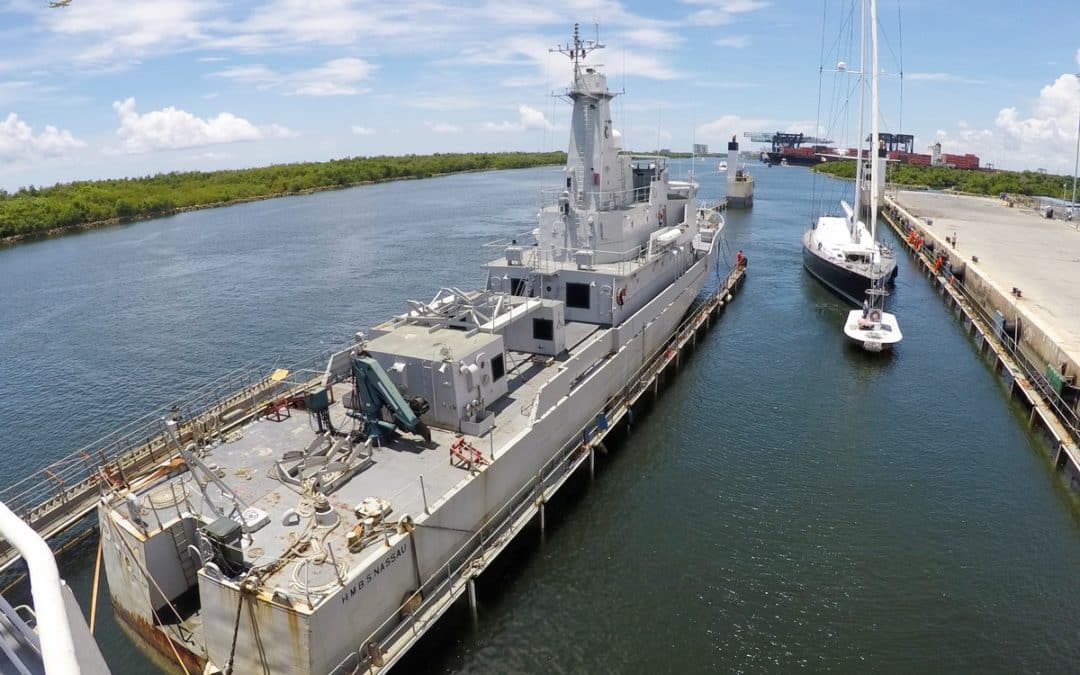 The HMBS Nassau (P-61), a 60-metre Royal Bahamas Defence Force Corvette, has arrived at Damen Maaskant Shipyards Stellendam in the Netherlands for an extensive refit. The 17-year old vessel will receive a comprehensive overhaul that comprises full systems and instrumentation replacement.

The P-61 refit is part of the sizeable contract between Damen Shipyards Group and the Royal Bahamas Defence Force: the ‘Sandy Bottom Project’ that the two parties signed in 2014. This includes the delivery of nine Damen vessels, disaster relief equipment, a bridge simulator, upgrade of various local ports in conjunction with Van Oord and the refit of two Corvettes. Damen is currently finalising the refit of the first Corvette – the HMBS Bahamas P-60 – at a local yard in the Bahamas.

All-inclusive scope
The scope of work in Damen Maaskant Shipyards Stellendam’s planning is extensive. “The P-61 is 17 years old and is in need of a complete refit. So this is going to be a complete renovation project,” notes Tom Mastenbroek, Damen’s Regional Service Manager for the Caribbean. “The yard will overhaul all the ship’s systems; replacing components where necessary. The main engines will be overhauled by Pon Power. The vessel’s bridge will also be completely renewed.” Additional work also includes steelwork, repainting and full replacement of the vessel inventory.

A common theme
After their refits, both Corvettes will be very similar – in terms of systems and instrumentation – to the nine new build vessels that the Royal Bahamas Defence Force has purchased from Damen. These include the Stan Patrol 3007, Stan Patrol 4207 and Stan Lander 5612.

This commonality will yield numerous advantages. During operations, for example, crew mobilisation between vessels will be more straightforward and crew training programmes can be standardised.

It is worth noting that another part of the ‘Sandy Bottom Project’– the bridge simulator – will also make crew training more efficient. Expected to be delivered at the end of the year, this will allow captains and crews to perform training simulations of all vessels included in the project.

Another benefit concerns the ongoing maintenance of the two Corvettes, highlights Mr Mastenbroek. “From a Damen Services standpoint – after completion, the vessels will be considered as ‘Damen’ vessels,” he says. “The Royal Bahamas Defence Force will also be using our Computerised Maintenance Management System.”

Client involvement
Commander Warren Bain from the Royal Bahamas Defence Force has been based in the Netherlands for the entire ‘Sandy Bottom Project’. Referring to the cooperation with Damen throughout the contract, he says: “Damen has been very willing to listen to what we’ve had to say and to share ideas. I also have a small technical team here with me, so we’ve been able to be involved in the entire process – down to the smallest detail.”

The P-61 refit is expected to take approximately 9 months. On completion, the vessel will return to the Bahamas on her own keel.