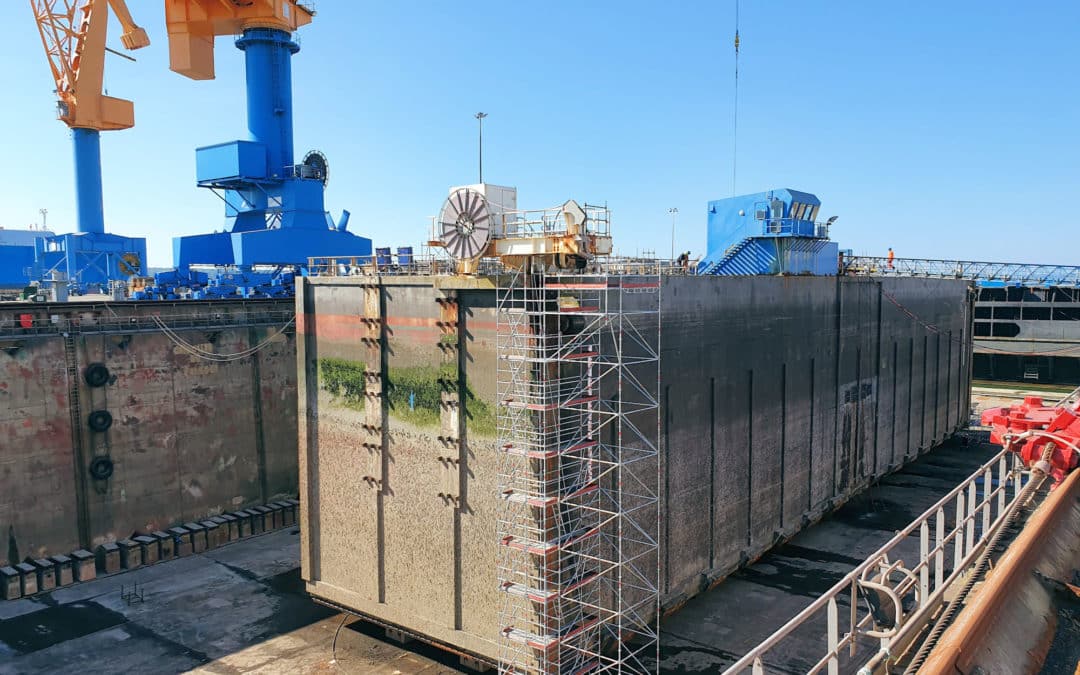 In May 2020, the ship caisson for No 3 dock in Brest, France was subject to a technical shutdown and needed a total makeover.

The 420m by 80m wide dock with a draft of up to 10.1m is one of the largest in Europe, and makes it particularly interesting for larger cruise vessels.

Belzona’s Authorised Distributor for Western France, Alliatech, took part in the large project to renew this important lock gate at the port by repairing two bearing surfaces of the ship caisson. The client required an effective and timely solution, as these repairs were hindering the shipyard’s activities.

The ship caisson was experiencing severe corrosion, which had deteriorated the surfaces in contact with the mobile gates. This deterioration had led to the material loss of the lateral plate substrate, to which the gates press against and form the seal. This meant that the creation of a watertight seal by the caisson and the gates could not be ensured, therefore making the caisson not fit for its operational purpose.

The main issues that the ship caisson was experiencing were:

The client had considered conventional repair methods, but none seemed to be the right option. These repair options were:

After reviewing the repair options above, and the realisation that neither would provide a suitable solution, Alliatech was called in to help.

The distributor had worked on several other ship caisson projects to renovate the lateral bearing surfaces of ship caissons located in this port and on a military base between 2015 and 2020. As a result, the company already had extensive experience of this type of application and were aware that Belzona’s composite solutions were perfectly suited for this project.

Before starting the project, the client had some specific requirements:

The dimensions of the bearing facades of the caisson ship which needed to be resurfaced and protected were 18m x 1.1m.

The three products and quantities chosen for this large application project were:

After cleaning and preparing the surface through grit blasting, a protective coat of Belzona 1331 was applied due to its outstanding erosion and corrosion resistance under immersion.

Belzona 5811, which protects equipment operating under immersion from corrosion, was first applied on the prepared surface to protect it from oxidation before being re-profiled.

Belzona 1111, an epoxy-based composite was then applied to rebuild the corroded surfaces of the plates.

To achieve a tolerance of 1 < mm/m, the applicator used an industrial plumb line and a bolt welded on the substrate to achieve the ideal thickness.

Alliatech was able to meet all of the client’s demands, and showcased their expertise in this application by precisely assuring the tolerance of <1mm/m between the seals and the supporting plates of the caisson to ensure a watertight seal.

The project took less than three weeks (472 hours), and was able to offer a long-term solution that no other competitors could offer.