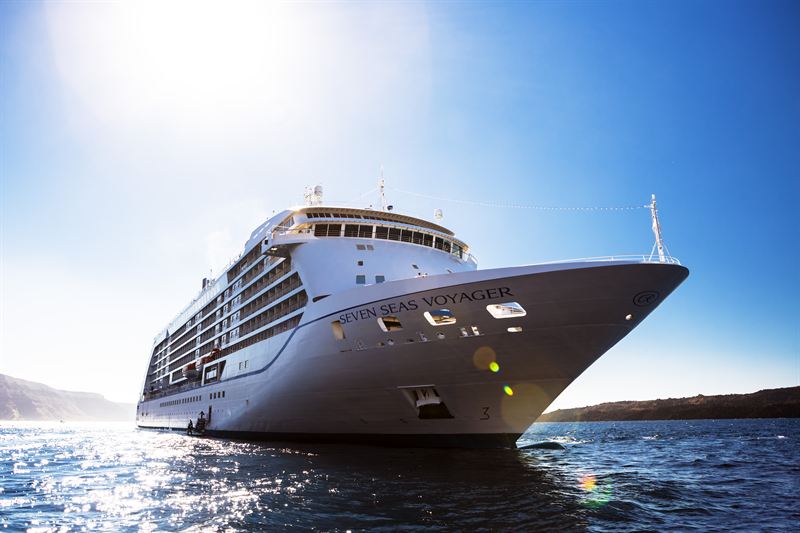 Regent’s Seven Seas Voyager, launched in 2003, entered the shipyard in Marseille for a full system update in October 2016. While drydocked, the vessel was equipped with new, state-of-the-art wastewaster treatment systems from Evac.

The Evac MBR (membrane bioreactor) is an advanced wastewater treatment process that treats all wastewater streams to the same standards of land-based municipal plants. It allows vessels like Seven Seas Voyager to operate in environmentally sensitive areas such as Alaska and the Baltic Sea. All wastewater generated by passengers and crew is treated and discharged without threat to health or the environment.

“No retrofit is ever standard,” says Carlo Paiella, Regent Seven Seas Vice President, Technical Operations. “Every ship is unique and preparations are made well in advance. In this case, the planning was well done and the execution was flawless.”

While Seven Seas Voyager was in drydock, two openings were cut in the hull, one starboard and one port. This enabled the MBR units to be brought as ready-assembled and tested units.

Cutting the hull may sound dramatic, but other options are more complicated and expensive, says Ljubo Jurisevic, Managing Director of Evac Germany and President of Evac’s Global Cruise Business. “The alternative was to bring all equipment such as pumps, blowers, membranes, sensors, and flat sheet stainless steel plates, down to the engine room on deck one and start the welding of the MBR tank and assembly of equipment while the ship was in operation.”

Such a plan requires much more time on board for the installation crew, who would occupy cabins which are otherwise sources of revenue for the cruise line. “That’s why a retrofit in drydock makes so much sense,” says Jurisevic. “Long, drawn-out retrofits simply decrease the earning power of the vessel.”

Everybody plays his part

According to Regent’s Paiella, the vessel was in drydock for two weeks, but it only took seven days to open the hull, bring in the MBR unit, and close the hull.

“You put a schedule together and involve the yard, who provides the core assistance you need. Everybody plays his part. If any step is delayed, then a domino effect takes place, and the departure of the vessel can be delayed.”

Paiella has not personally had a vessel delayed in his 30 years in the business, though he says retrofits in drydock are an intense process. “We’ve had close calls, and these can be of concern. It depends on the volume and per diem of a company, but with six-star-plus vessels, a few days late may mean millions in potential lost revenue.”

To make sure things go off without a hitch, top cruise lines choose their partners carefully. Paiella made his choice based on a variety of factors. Primarily, because Evac systems were installed on board another Regent ship, Seven Seas Explorer, branded as the most luxurious vessel ever built.

“I saw the Evac wastewater treatment system in construction phase for Seven Seas Explorer,” says Paiella. “It was sturdy, it had the features, it met the latest regulations, and the price was competitive. Evac has a strong history in this business.”

Seven Seas Voyager, however, was the first retrofit that Regent had done with Evac, though they had worked before with other suppliers. “I think the way Evac does it is better,” says Paiella. “The MBR comes pre-assembled on skids. It’s not that difficult to put it in because it’s well placed. Having done a similar retrofit before I can say Evac did it better. Of course, subcontractors do the installation, but Evac’s choice was a more efficient one.”