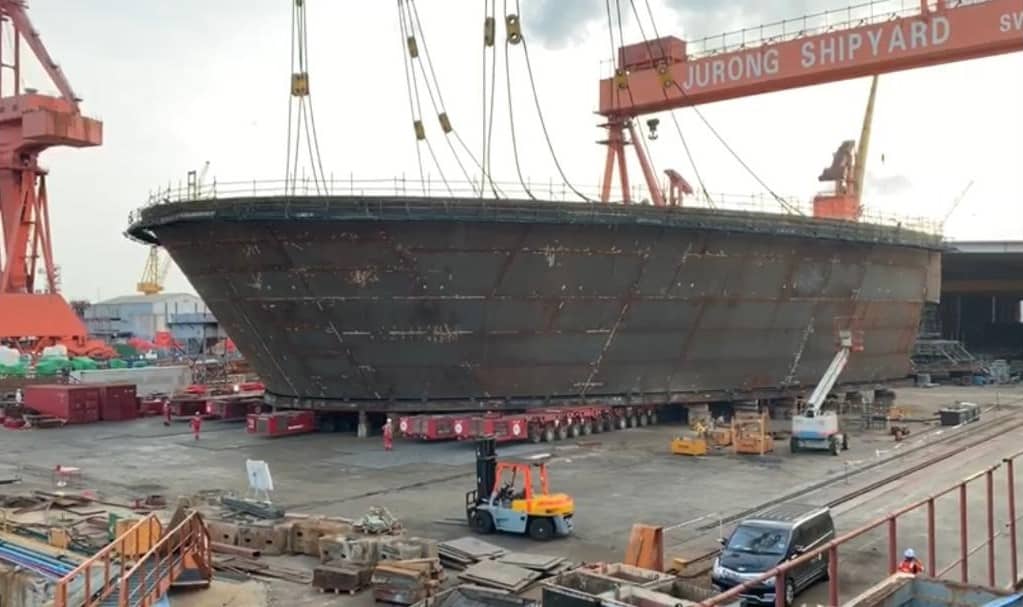 The Johan Castberg FPSO will be Norway’s largest to date and will begin production at an exploration field of the same name 140km offshore the country during 2022. The hull for this 295m long vessel is being constructed at a facility in Singapore prior to its transportation to Scandinavia, where it will join living quarters and topsides fabricated there.
ALE was chosen to perform several site moves of hull sections during fabrication. Their speed of mobilisation would ensure that minimum disruption was caused to other work taking place on the restricted site as this cargo was manoeuvred.
ALE transported two sections of the FPSO’s hull, which were designed with reinforcements to deal with potential surface ice on the Barents Sea. They were received by ALE on supports at a clearance of 1,100mm, and so needed to be jacked-up before transportation could take place.
For the first module, ALE’s scope included weighing prior to transportation. To achieve this, 20 300t and six 600t weightor jacks were used for measurement, and to jack-up the module to a height suitable for SPMT use.
116 axle lines of RSG4 SPMT were then manoeuvred underneath the load, alongside 36 further axle lines mobilised at short notice by ALE to accommodate a small increase over the specified weight of 2,700t, plus 150t transport frame. This module was transported approximately 500m across site and set down on supports ready for seaborne transportation.
The second module, weighting 2,934t, was lifted by the same configuration of SPMT and transported approximately the same distance across site. Both transportations took around an hour to complete, ensuring space at the yard was used as sparingly as possible.
These operations were performed in two phases, the first taking 15 days and the second lasting 10 days from mobilisation to demobilisation. Both modules will ultimately form part of the bow of the Johan Castberg FPSO, which will be shipped complete from Singapore to Hammerfest, Norway at the start of 2020.
Once deployed, the FPSO is expected to recover between 450 and 650 million barrels of oil from 30 subsea wells.