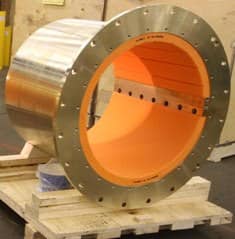 A roro vessel suffered corrosion damage to the aft starboard side shell plating. Hydrex report that they mobilized a team from their office in Tampa Bay to the vessel’s location in Palm Beach to perform a class approved permanent underwater insert repair. This allowed the owner to keep his ship on schedule.

The divers installed a cofferdam over the waterside of the affected area. Because the damage was situated in the turn of bilge it was essential that the cofferdam was modified to fit perfectly over the rounded shape of the hull. The frame covering the damage was then removed. This allowed the team to cut away the damage and the surrounding area. Next they positioned a new insert plate. The insert was then welded following the Hydrex class-approved procedure.

An independent inspector carried out ultrasonic testing and the repair was approved by the classification surveyor who was present during the operation.

The divers also carried out a full inspection of the underwater hull of the roro vessel as well as cleaning its two propellers. By combining several jobs, the entire operation could be carried out economically and within a very short time frame. Only one mobilization needed to be planned.