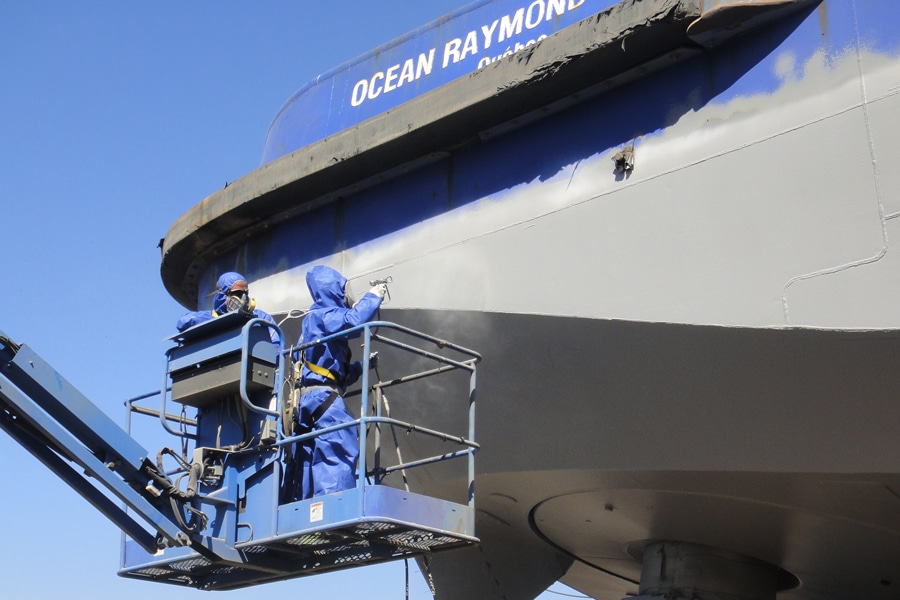 David Flood, Managing Director, Jastram Technologies, the commercial representative for Subsea Industries in Canada, said: “Subsea Industries has had a successful relationship with Groupe Océan, resulting in Ecospeed applications to nine vessels in its fleet. Its first experience with Ecospeed on the Ocean Raymond Lemay was deemed a huge success. When the vessel’s hull was water-jet cleaned this summer after more than 60 months in service, the hull coating showed no sign of paint degradation.”

Flood explained that Groupe Océan specified the coating for the largest tugs in its fleet because of the coatings’ lasting performance and environmental compatibility for operations in ecologically sensitive areas.

“The owner wanted a coating solution that would not impact the marine environment,” said Flood. “Chipping an Ecospeed hard coating almost never happens but when it does, there is no environmental damage, no sediment pollution.”

Manuel Hof, Production Executive and NACE Coatings Inspector at Subsea Industries, added: “Groupe Océan’s vessels operate in highly abrasive waters in ecologically sensitive areas, so it was important for the owner to have a hull a coating system that protects both the vessel and the marine environment.”

Outlining the importance of the Canadian market for Ecospeed, Hof said: “With many vessels operating in the highly sensitive areas, such as the Great Lakes, Alaska and the northwest passage, the Ecospeed hard coating is becoming the hull coating of choice for meeting stringent environmental rules and regulations.”

Jastram Technologies is working on other significant Ecospeed projects in Canada, one of which is a 31,992dwt ice-going bulk carrier.