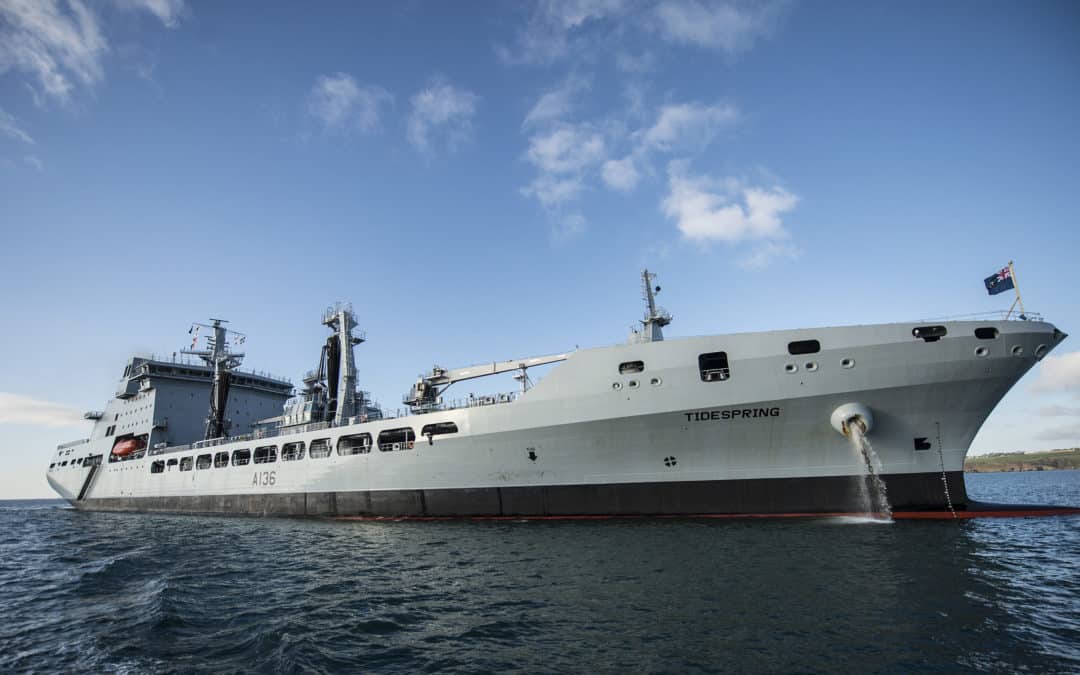 A&P Group’s Falmouth facility has welcomed the first of a new class of Royal Fleet Auxiliary (RFA) tankers, RFA Tidespring, to the UK.

RFA Tidespring and her sister ships are part of the MOD’s Military Afloat Reach and Sustainability (MARS) Tanker project. RFA Tidespring will enter service with the RFA later this year.

RFA Tidespring will maintain the Royal Navy’s ability to refuel at sea and support deployed amphibious, land and air forces close to the shore and is designed to support the new Queen Elizabeth Class Aircraft Carriers, along with the rest of the Royal Navy and RFA Fleet. The 39,000 tonne ship, which is 201 metres long and has a beam height of 29 metres, berthed at Duchy Wharf at A&P in Falmouth over the weekend.

A&P Group’s team will deliver a programme of military customisation, armament and upgrades to UK MOD standards before the RFA Tidespring enters service. Working with the ship’s designer BMT Defence, multiple UK industry contractors and the MOD’s Commercially Supported Shipping team, A&P Group made several visits to the vessel during its construction to prepare 37 design specifications for military equipment upgrades including fabrication, pipework and system modifications.

A&P Group is also providing Fleet Time Support for RFA Tidespring, which involves the provision of global engineering and maintenance expertise from the moment of build completion throughout the vessel’s journey to the UK. A&P has worked closely with the MOD to deliver engineering modifications as needed.

Work to prepare the yard has included procuring and preparing engineering spares, consumables and tools for repairs once the vessel is in service. A&P Group will also deliver a full Health, Safety & Environment Assessment package to update the ship’s safety case.

David McGinley, Managing Director of A&P Group said: “We have undertaken a tremendous amount of preparatory work ahead of RFA Tidespring’s arrival including design, scheduling, procurement, security and safety plans. This is a hugely significant project for A&P Group and one which recognises the calibre of the infrastructure and workforce at A&P in Falmouth and across the group as a whole.”

Vice Admiral Simon Lister, who led procurement of the Tide Class at Defence Equipment and Support, said: “RFA Tidespring will be a familiar and reassuring presence for Royal Navy ships as they undertake missions in defence of the UK’s interest.

“The continued successful delivery of the Tide Class programme, meeting all requirements and under budget stands as a testament to the excellent working relationships which DE&S has built with suppliers in the UK and around the world.”

A&P Group already has a contract to support and maintain RFA ships at home and abroad until 2018. Under the Cluster Support Programme, A&P Group provides maintenance support to groups of MOD vessels, which include RFA Argus and the RFA Bay Class vessels Mounts Bay, Cardigan Bay and Lyme Bay.