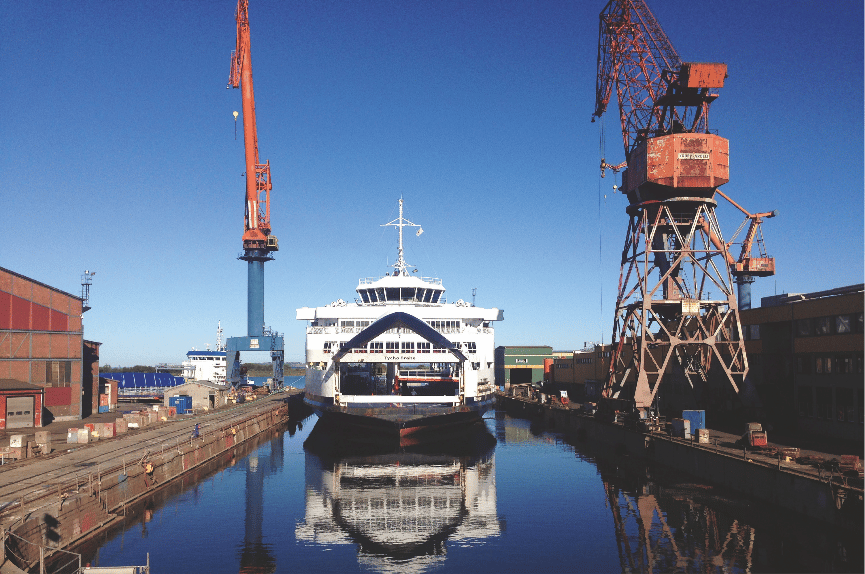 The Tycho Brahe has docked at Öresund Dry Docks in Landskrona, Sweden for completion of the remaining conversion and installation works to ensure that the ferry can be recommissioned as a fully battery-operated vessel on the Helsingborg-Helsingör route by the end of June.

“We have had a very good start to 2017,” says Magnus Malmström, Sales Manager for the yard. “I think the battery project is the main thing so far in 2017, but you never know what might happen in the future!” 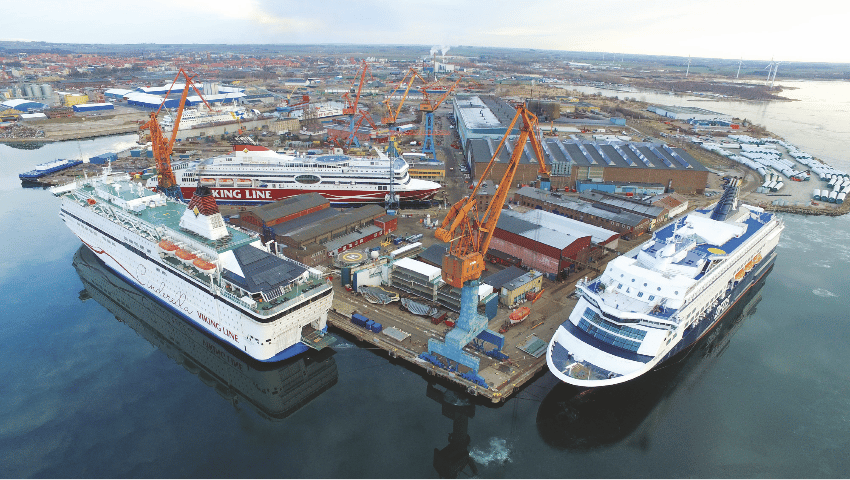 Tycho Brahe and Aurora were both docked earlier at the shipyard in Landskrona  for a short period of time
for installation of containers and deckhouses for batteries and other technology.

“We chose to decommission the ferries for a couple of days in order to be able to install the battery containers at this early point in the conversion process. That provided us with the option of re-commissioning the ferries as soon as possible, as technicians were subsequently able to continue working in and around the containers, even though the ferries were in operation between Helsingborg and Helsingör,” said CEO Henrik Rørbæk, HH Ferries Group.

The containers and deckhouses contain batteries, transformers, converters and cooling systems, and the preparations for connecting technical installations in the containers and the ferries’ engine rooms, and were completed in September 2016.

The next stage of the conversion process began when Tycho Brahe was decommissioned on Tuesday 18 April, with the aim of returning as a battery-driven ferry before the summer season begins. Aurora is scheduled for docking for completion when the summer season draws to a close. Mercandia VIII replaces Tycho Brahe and Aurora during their respective dockings.

Tycho Brahe is scheduled for full re-commissioning on the route on 23 May, at which point a thorough test programme will be conducted before the conversion to full battery operations is completed.

“The process of installing batteries for forward propulsion now reaches its final phase, and we are looking forward to introducing battery operations as the first operator in the world with such a high-frequency timetable. The reduced emissions following the conversion will have a positive impact on the environment in the entire Öresund region,” said CEO Henrik Rørbæk, HH Ferries Group.

ABB’s project to convert two HH Ferries’ vessels into the world’s largest emission-free ferries sees both the ferries being fitted with 4.16 MW of batteries.

This highly innovative project also includes the installation of four fully automated shore-side charging arms, and these are currently under construction in ABB´s factories. Civil work will be completed at the quayside in Helsingör and Helsingborg in the beginning of next year.

Marcus Högblom, Vice President of Global Sales, Passenger vessels and Azipod propulsion said, “We have a strong commitment to our customer HH Ferries and we need the best partners to work with us. We have experience of working with our selected suppliers and we are confident that their competence and high technical standards will meet ABB´s and HH Ferries´ requirements for this project. Our conversion of the Tycho Brahe and Aurora ferries to battery operation is an essential part of our environmental strategy to reduce emissions and lower the environmental footprint of our operations on Öresund. We are proud of the initiative, which is the largest single project investment in the company’s history. When the two ferries sail on pure electric power before the end of 2017, it will be to the benefit our many passengers and the local environment,” said Henrik Rørbæk, CEO of HH Ferries AB. ABB´s delivery for modernising the ferries includes batteries, and an energy storage control system and Onboard DC Grid technology. At both ends of the route ABB will supply the first automated shore-side charging stations, using an ABB industrial robot to optimise the connection time and therefore maximise the charging period. The two ferries will operate completely on battery power between Helsingør (Denmark) and Helsingborg (Sweden), a distance of approximately 4 km carrying more than 7.4 Million people.

It is an inherent part of HH Ferries Group’s strategy to emphasise initiatives with a positive environmental impact. Since 2007, the ferries between Helsingborg and Helsingör have adhered to the emission regulations introduced on 1 January 2015. With the installation of batteries, the route’s total emissions of CO2, carbon monoxide, sulphur oxide and particles are reduced by more than 50%.

The conversion of the two ferries is the largest single investment project in the company’s history, with an estimated cost of nearly SEK 300 million. INEA, the EU’s executive agency for innovation and network, has chosen to support the project with approximately SEK 120 million.

Other recent visitors to Öresund Dry Docks includes the Viking XPRS, which is a fast cruise ferry owned by Viking Line’s and operating on the Helsinki–Tallinn route, and Eckerö, which was accommodated in the yard’s floating dock. Pearl of Scandinavia and Cinderella were also visitors in January, along with Richard With and Auto Bay.

From steam to diesel and now electricity: the oldest operating ferry in Finland has recently become the nation’s first all-electric passenger vessel after being fitted with Visedo power.

Although much smaller than the Tycho Brahe and Aurora, the historic Föri ferry has been fitted with a new zero-emission electric drivetrain that will deliver greater efficiency, less noise and reduced operating costs.

The Föri initially entered service in 1904, after the City of Turku commissioned local shipyards Aktiebolaget Vulcan to build a city commuter ferry to take passengers across the Aura River to Åbo.

Since then the distinctive little orange vessel – named after the Swedish word for ferry, färja – has traversed its route nonstop back and forth across the river for more than a century to become a beloved transport icon for the city.

Turku commissioned local boatyards Mobimar to complete the upgrade, where the vessel was drydocked in March this year. Mobimar oversaw the removal of the boat’s diesel-powered hydraulic motor and the old control system. The new installed system was eight tons lighter; consisting of two Visedo permanent magnet motor drives and two Visedo DC/DC converters which control the ferry’s DC grid.

The new vessel draws power from batteries that are charged overnight, with the new power system simultaneously improving redundancy and making it possible to run on one or two motors – particularly important during icy conditions. This also allows future motor maintenance in shifts, with no interruption to operation.

The DC/DC converters serve to increase the battery voltage to a level that is more suitable for the motor drives. This minimises losses while maximising performance and reliability.

“The Föri ferry is a national treasure, but with its old diesel engine, fuel consumption and emissions were high and overall efficiency poor,” said Visedo Project Engineer, Heikki Sallinen. “Visedo power brings the 100-year-old vessel into the 21st century without changing its character and delivers zero-emission transport for Turku.

“The revolution to electrify the world’s diesel transport is already underway. After powering Asia’s first hybrid electric ferry in Taiwan and continuing to work on the project to power the world’s biggest E-ferry in Denmark, at home Visedo is proud to help transform Finland’s oldest ferry into its first all-electric vessel.”

“For such a sensitive project like this we needed a project partner who could deliver a new permanent magnet motor and charging technology built for purpose,”said Mobimar Project Manager , Antti Immonen. “There was no off-the-shelf solution, we needed a partner who could be flexible and responsive to our needs – in that regard Visedo is like us in our approach to pioneering innovation for demanding applications.

“We were already impressed by Visedo during a previous collaboration with Mobimar to modernise a Korean Mark V65 submarine. There are now 240,000 passengers who have dived to depth below the Yellow Sea in a submarine with a Visedo-powered system. And we used some of the same components in the Föri!”