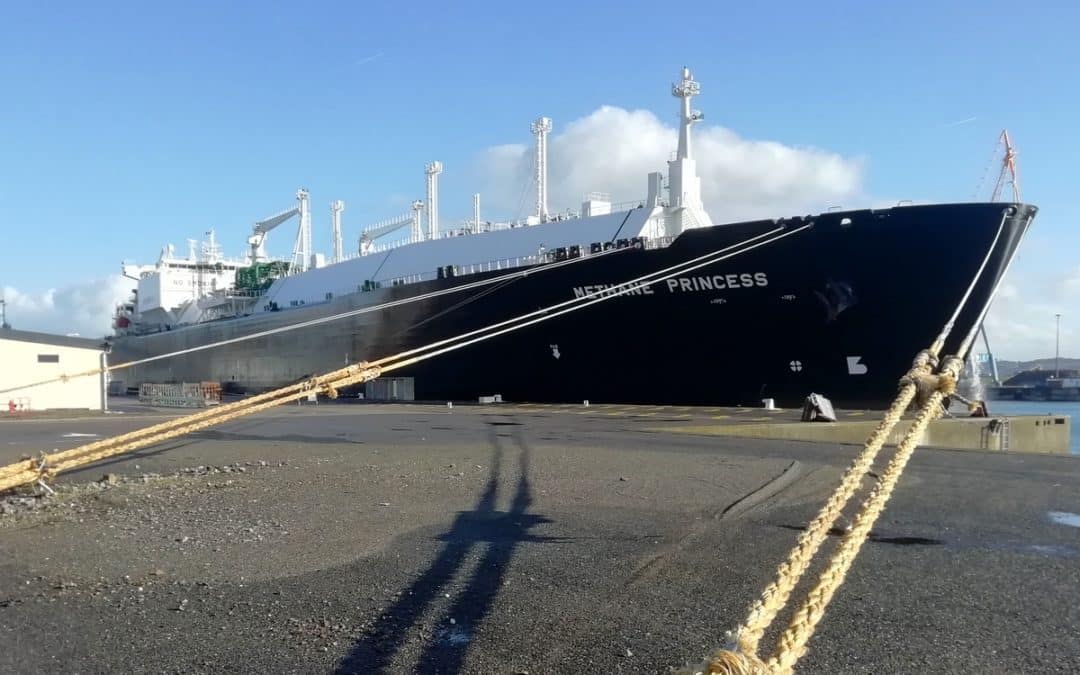 Over four days in January, Damen Shiprepair Brest successfully carried out repairs to the hull of the 266-metre, 138,000m³, LNG Carrier LNG Methane Princess. In order to achieve this in the minimum time it was done while the vessel was both afloat and with the cargo tanks holding either some liquefied gas and gas vapour.

The damage, which occurred above the waterline on the aft starboard side, was the result of a collision with a harbor tug while berthing at the Punta Europa LNG Terminal (EG LNG) in Equatorial Guinea. She then proceeded to the Milford Haven (UK) LNG terminal to offload. The Class association required immediate repairs and issued to the vessel an extension to the LNG Methane Princess’s Class certificate which made her ineligible for charter until the damage was made good. It was therefore vital that the works were completed as soon as possible. To achieve this, the owners requested that Damen Shiprepair Brest (DSBr) perform the hot work repairs with the vessel afloat and with residual gas in the tanks so as to keep them cool. By doing so, the vessel could return to work almost immediately without the usual 3 to 4-day cooling down process.

Ahead of her arrival, meetings were held with the client and the safety and control procedures prepared. Once she was alongside, several controls were performed by a Shore-certified chemist to identify the various risk areas and certify that the hot work area was safe before starting. The yard team then constructed a platform against the side of the vessel side, held in place by eyes welded on to the hull, and the work went ahead to remove and replace the damaged steel. Once the welding and the necessary tests and certification by the Class were completed, the hull area was painted.

The professionalism of the Damen team and its long experience of working with gassed-up LNG carriers was key to the success of the project. The controlled tests coordinated by the yard and the port authorities prior to the work starting also ensured that no risks were taken at any time during the operation.

This was not the first visit by the LNG Methane Princessto DSBr. The previous September she was at the yard for a scheduled intermediate survey that included a full scope of work on the engines, cargo tanks and related equipment. Owner Golar LNG and DSBr have a relationship going back to the 1980s when the fleet operated under the Gotass Larssen name. After a quiet period in recent years the partnership has been rekindled and discussions are underway regarding a variety of projects. The LNG Golar Arcticis already booked in for H1 2019, and the management and staff at DSBr look forward to seeing more Golar carriers in their yard in the years ahead.

In recent years, LNG Carrier maintenance has been concentrated in the Far East, where LNG demand was then concentrated. However, demand is returning to the North Atlantic as terminals for both exports and imports open on both sides of the ocean. Damen has been investing in its yards to meet the anticipated demand, with Damen Shiprepair Brest a leading contender due to both its long experience in the sector and its convenient location.