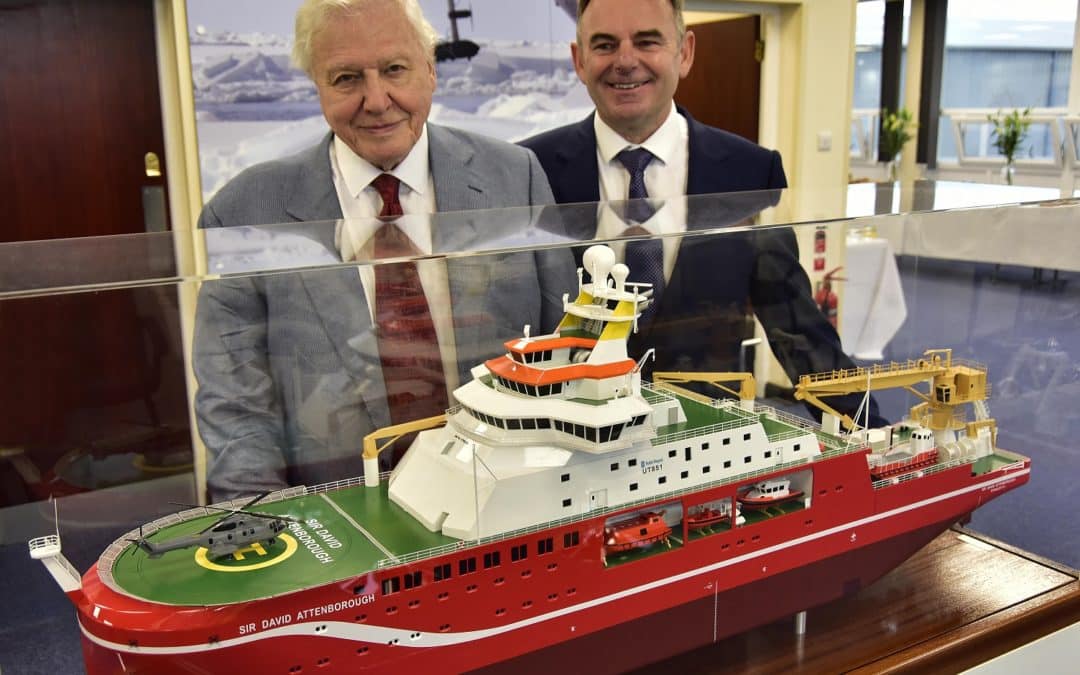 Cammell Laird shipyard announced today, MAY 30, at the Nor Shipping Trade Fair in Oslo that it has reached the nine-month milestone in its project to build the UK’s new polar research ship the RRS Sir David Attenborough.

The Merseyside-based engineering services giant beat off competition from around the world to be appointed to build the £150million vessel. The ship, which is the biggest commercial shipbuilding project in Britain for 30 years, has been commissioned by the Natural Environment Research Council (NERC), and it will be operated by British Antarctic Survey (BAS), transforming the UK’s polar research capability.

Cammell Laird CEO John Syvret CBE said since August 2016 1,800 tonnes of steel, out of a total of 5,200 tonnes, had been fabricated to make the hull of the ship, which carries the Cammell Laird hull number 1,390 and is due to enter service in 2019.

“The project has generated real momentum and we are pleased to be on time,” he said. “The first really significant moment of the build came in October when Sir David Attenborough visited the yard for the official keel laying ceremony. This was the biggest set piece event at Cammell Laird for decades and that is when it really started to sink in for the company just what a historic ship the Sir David Attenborough will be. It will join the pantheon of great Cammell Laird ships.

“The keel laying and all the media coverage galvanised people and there is considerable pride in the workforce that we are building this ship, which will be a showcase for what Merseyside and British industry is capable of. We want the Sir David to be known around the world as the finest, most advanced polar research ship ever built.”

Cammell Laird managing director Linton Roberts said important landmarks in the build so far include the testing and fitting of two Rolls-Royce drive propulsion motors weighing 115 tonnes, with a combined cost of £5million. The motors were transported by road from Rolls-Royce’s plant in Bilbao, Spain, to Birkenhead, a journey which took nine days as the load could only travel at night.
Meanwhile, the ship’s stern thrusters have also been trialled and fitted to the ship. The two 1,576kw rated thrusters were made by North East manufacturer Tees White Gill. They weigh 15 tonnes each and stand three metres high.

“The next phases of the build will focus on the power of the ship, with four seven metre long electrical propulsion switchboards installed, together with four two metre long frequency converters,” said Mr Roberts. “We will then look at the moon pool structure, one of the most complex and innovative aspects of the ship’s design. It is from here that important science will be undertaken, including the launching of the remotely operated sub-sea vehicle Boaty McBoatface.”

Cammell Laird project director John Drummond said the team is planning to install the nine and six cylinder Rolls-Royce engines in the ship shortly. These high-powered engines will help drive the ship’s specially designed hull through one metre thick ice at a speed of three knots. It also has the capacity to run at 11 knots with almost no underwater noise radiated from the vessel. The combination of silent running and ice breaking capacity is one aspect which makes the vessel so technically advanced.

In total 220 engineers and 20 apprentices are presently working on ship including platers, welders and mechanical and pipe fitters. Cammell Laird has also been able to deploy its two new 15 tonne and 50 tonne cranes for steel production in its construction hall, which is one of the biggest and best equipped in Europe.

John Syvret said:
“This project is putting Cammell Laird and British shipbuilding and engineering back in the super league of global shipping where we belong. It sends a very powerful message to the global maritime industry about the skills and facilities we have. Cammell Laird is determined to pursue an aggressive exports campaign. We want to use this high profile project to catapult us into the marketplace following the recently announced shipbuilding strategy.”